Underway early Saturday morning or Covington, Louisiana and a reunion with two old friends from our earliest days. It is partly sunny and in the 70’s….great traveling weather.

Took I-10 to Mobile, Alabama where we saw the Austal shipyard…..the other Littoral Combat Ship (LCS) producer….didn’t see any of the LCS ships however…..perhaps they sank at the pier. West of Mobile we dropped down to US-90 for the scenic drive through Bayou LaBatre, Alabama, and on into Mississippi.

Continued through Moss Point where we saw a man dragging a 10 foot cross down the road followed by a van full of support folks….not quite sure what that was all about. In Pascagoula Mississippi, where Bill spent time working, we discovered not much had really changed, the LaFont Motel is still going strong although appears to be more of a residence hotel now.

Meandered through Gautier where much to my pleasure the old building once housing The Bamboo Lounge was still standing but now housed a bar
called One Eyed Ron’s. The Bamboo (or as we called it “The Boo”) was the official Aegis Test Team Field Office, there even was a sign on the wall above the bar proving it. Some of the most significant shipbuilding and Aegis testing dialog took place in there. I rented an old trailer behind the Bamboo from the manager, Melba and her daughter Melba (true). I’m surprised the place is still standing as there was a bit of a termite problem. It all started when a gang of termites came in to the bar and asked—–“Is the bar tender here”? Quite a fight broke out with the swinging of pool que’s and everything.

Continued west on US-90 through Ocean Springs, past the La La Land Liquor Store and on into Biloxi and Gulfport. Observed a lot of renewal but still quite a bit of Katrina damage. Most of the casinos and large hotel chains are back in operation.

Did notice the Hooters restaurant has been relocated north of the highway and the Armed Forces Retirement Home in Gulfport is being totally replaced with a modern high rise further back from the beach. No sign of that popular pedestrian overpass to the beach being replaced however. There are two new military memorials that we noticed. The Mississippi Vietnam Veterans Memorial and the USS Tullibee (SS-284) Memorial in Ocean Springs. Hey Dewey….weren’t you on that sub?

Lots of road reconstruction going on and witnessed quite a few vacant lots with only the slab foundation showing. Most all the Katrina debris has been removed as well as most of the FEMA Trailers.

Bounced back onto I-10 to make better time toward Louisiana. At one of the rest stops we met a neat older lady (70’s) traveling alone in her camper making a counter clockwise lap around the U.S. She left her home in Northern California in September 2008 and doesn’t plan on returning home for another year. She was fascinating to talk to and had a lot of spirit.

Arrived mid afternoon in Covington, Louisiana which is on the north shore of Lake Pontchartrain to visit with Eileen and Johnny who were our neighbors in Key West Florida way back in 1965. We lived across a very narrow street from each other in a set of four-plex’s called Flagler Village. We were all very young, between 17 and 20 years old, in the Navy however lower rated and therefore very poor and we both had newborn daughters. Due to our common circumstances, our friendship was based on how to care for Kimber & Lisa and since neither of us had any family around to rely on, we depended on each other. When we were transferred to Charleston, SC in August of 1966, we began what has been a very long “Christmas Card” friendship. Military families especially, can relate….. Through the last 40+ years both families have been very busy with children, careers, moves, parents etc.

They offered to allow us to camp in their very large yard which we took advantage of. In back they have cultivated many citrus trees including Satsasuma and Kumquat, which we picked right off the tree to enjoy. We took a walk around their neighbor hood and enjoyed the very diverse architectural styles of this neighborhood nestled by the Tcnfuncteh River.

When we arrived at their house, the moment we saw each other we re-connected and spent 2 days reliving our first year in Key West and continued on through the last 4 decades of sharing our experiences. As with most grandparents, we both shared our experiences with doing as much as we can to help out with our grandkids. They are very involved with their 3 granddaughters, sharing parental duties with their son-in-law Ian, since Lisa passed away 4 years ago. They have achieved a good balance of sharing the parental duties and are involved with many of their activities. Katelyn, Gracen and Shelby are a big part of their lives.

They treated us to a wonderful seafood dinner at one of their favorite local restaurants. Although Eileen is a wonderful cook, specializing in all the Cajun specialties, we told them we’d rather spend the time visiting than her cookin 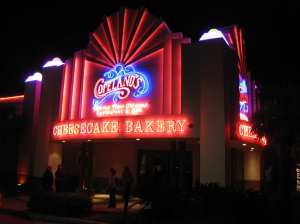 Visit with Eileen and Johnny

On Sunday, they took us on a tour of their area. We went by Lake Pontchatrain, some of the very rural areas, local churches, schools, places they had lived, etc. We finished the tour with a very emotional visit to the cemetery. We are so grateful they have shared their tragedy with us; hopefully, it will make it a bit easier for them to bear.  Eileen’s grandfather was a popular New Orleans Jazz Musician and has an exhibit profiling him in the city Jazz Museum. His name was Emile “Stalebread” LaCoume and was in the “Razzy Dazzy Spasm Band”. It was fascinating to hear this family history of a blind musician who knew Louis Armstrong and played many stringed instruments for folks at venues from political gatherings to jazz halls to brothels. In an example of the old adage “an apple doesn’t fall too far from the tree” Eileen exhibited her musical heritage with a stirring rendition of anchors away…..complete with a signal flag routine. It was great visiting with these old friends.

The New Orleans area is fascinating. In many places the Mississippi River is above the surrounding countryside. This unique geography, which worked in harmony for many years, caused the biggest problems during Hurricane Katrina. The resilient spirit of the locals was evident by the bumper stickers seen on a few cars that read: “New Orleans-Proud to Swim Home”. Below are some images of the storm wreckage still remaining after almost four years and the rebuilding efforts that are still ongoing. 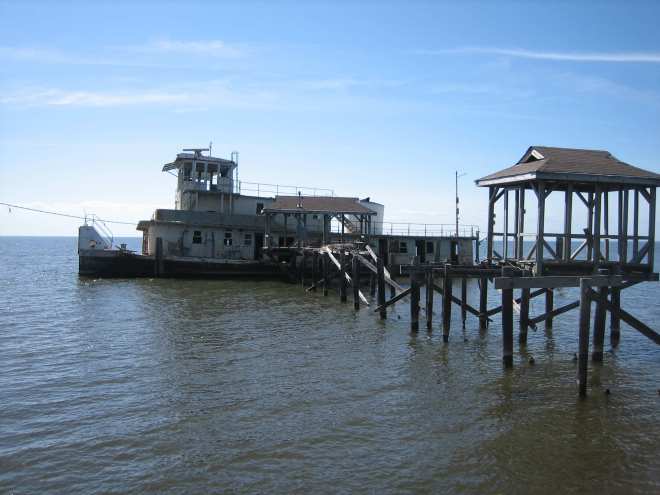 The photo on the lower left shows a rebuilt house that has been lifted 10 feet. Apparently this is a requirement of most insurance company’s nowadays in flood prone areas…..makes sense.

The bridge near their home on the north shore, across Lake Pontchartrain, to the city is 24 miles long! It would be like back home and traveling from Brunswick to Portland on a bridge!! Of course that might irritate the folks a LL Bean.