Underway for points north and west. Drove I-12 through Pumpkin Center and over the Mississippi River to Baton Rouge and Port Allen. Noticed a huge Exxon/Mobile refinery and tank farm on both sides of the interstate. Thinking the gas would be really cheap and being near empty we exited…..but the per gallon cost was actually more than usual! Go figure!! Leaving the city, there was quite a big backup. As we inched forward we noticed in the opposite lane there was a helicopter sitting in the middle of the interstate. Apparently there had been a pretty bad accident as there were many emergency vehicles at the scene. That side of the highway was totally stopped and backed up for miles.

Hopped on I-10 then later on I-20 heading into Texas. Since we were making good time, decided to take US 190 and see some of the Texas back roads. We did see our first oil well being drilled near the town of Krotz Springs.

Made a re-supply run at The Wal*Mart near the Lick Skillet Ranch where we spotted our first cowboy. He was dressed in a Stetson, plaid shirt, large belt buckle, Levi’s and cowboy boots. Looked like a tall Roy Rogers with mirrored sunglasses. He was leaving the store as we were and I was curious as to the type of vehicle he drove. Sure enough it was an older faded Ford pickup covered in trail dust. However the illusion was shot when, as he turned in front of us I noticed his license plate…..he was from Michigan. Actually according to the native Texans we talked to most all the folks dressed up in cowboy attire are tourists from away.

Did pass a bunch of farms and cattle ranches however. We even passed a Llama Ranch with a mess of llama’s milling about the field…..I bet at least one of them were named Dolly.

Along the way, we spotted some other roadside objet’d’arts.

In addition with the windy conditions and abundance of barbered wire fences there were many displays of “Witches Knickers”. What the heck is that you ask? Well that descriptive phrase is one of my favorite Kevinisms’s, from our son-in-law Kevin, that describe the many plastic shopping bags (most probably from The Wal*Mart) that are caught on barbered wire fences and billow out to resemble……you guessed it, witches’ knickers.

Stopped for a quick RON (Remain Over Night for you non military folks) in a small private campground in Hallsville, Texas.

Tuesday, February 10, 2009: Underway once again for points further north! It was overcast, mid 60’s and a bit humid. Drove southerly on US-64 passing by the Ponderosa Naturist Retreat. There was a very tall solid fence around the whole place and a gate house next to the entrance road. On the sign above the road, under the name, in smaller letters, was written “A Clothing Optional Resort”. Curiosity getting the best of me I thought about exploring beyond the fence but decided against it as my only suitable attire was very wrinkled.

Stopped for the night at a nice KOA in Caddo Mills, in northern Texas near the Oklahoma border, where we intend to stay a few days and visit an old friend. The weather looked threatening while we set up camp.

Kit signed onto the internet to check the forecast…..SEVERE THUNDERSTORMS, HIGH WINDS AND POSSIBLE TORNADO’s coming from the southwest…..EH
GADS!! Decided to position the trailer small end facing south and disconnect the 7000# truck from the 5000# trailer, using the logic that at least we can move faster in the truck alone if need be. Looked threatening, but nothing much was happening so we went to bed and turned on the weather alert radio. About 2100 the radio alerted and reported a NOAA severe storm watch. But other than a bit of wind, pretty quiet. Drifting off to sleep once again, the radio woke us up with a NOAA warning of “Tornadic Activity” detected in the area of Caddo Mills, TX…..YIKES!! The wind had picked up quite a bit and there was very heavy rain, thunder and lightning. We quickly got up, got dressed and signed onto weather.com; sure enough this is the storm image displayed. 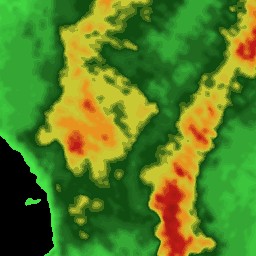 We were in the lower right band of red! Spent the next hour peering out the window for signs of any flying cows and at the laptop for instantaneous updates and possible storm shelters. The trailer rocked quite a bit but appeared to stay put on its stabilizing jacks.

As the storm passed I went outside our plastic box to see if we had been relocated to Kansas. It was breezy, mild and the rain had stopped. Looking up I could see bright stars through a clear dark sky. From start to finish, the worst of it was about 2 ½ hours. It was a pretty wild night.
The next morning we read online where this storm had moved into southern Oklahoma and killed 8 folks. We need a better severe weather plan…..and a small dog we will name Toto.

Wednesday & Thursday, February 11 & 12, 2009: We spent a couple of days in the Caddo Mills/Quinlan area of Texas, which is a bit northeast of Dallas. A very dear friend of mine, Kay, lives there and we wanted to spend some time visiting. Since her husband passed away 4 years ago, Bill kindly offered to help her with a few things around her house that needed tending to. She had a list waiting for him and after his “obligatory” half hour of visiting, he went right to work while she and I continued visiting. He systematically went right through the list and was able to take care of most of the minor problems that have accumulated during the last couple of years. We had a great time catching up on family news from the last several years. We have been friends since 1970; we were neighbors in Spring Valley, CA. She treated us to lunch both days we visited and we invited her for dinner and a tour of our little “mini mansion” the evening before we departed for Kyle, TX.

Kay lives in the country on 6 acres surrounded by farms, some raise beef cattle and some dairy cows. Sharing her fence line is a dairy farm and the cows keep her side of the fence well trimmed. 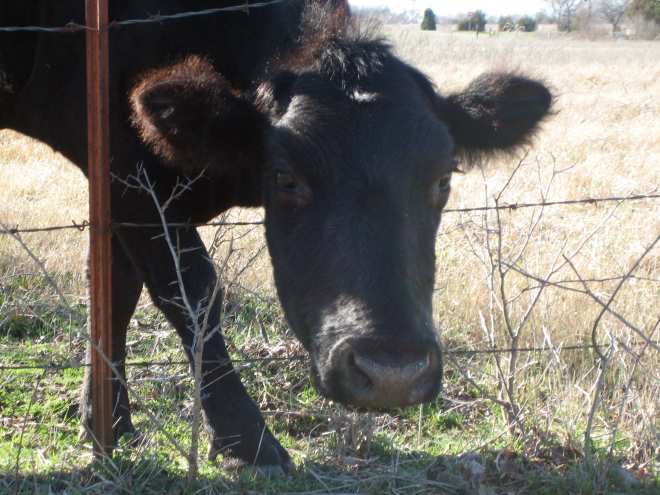 Most of the cows hung together except for the poor lady below. She grazed all alone being shunned by the more attractive and slimmer gals. She looked kind of scruffy and to add insult to injury she was deformed as she only had one of those udder thingies. 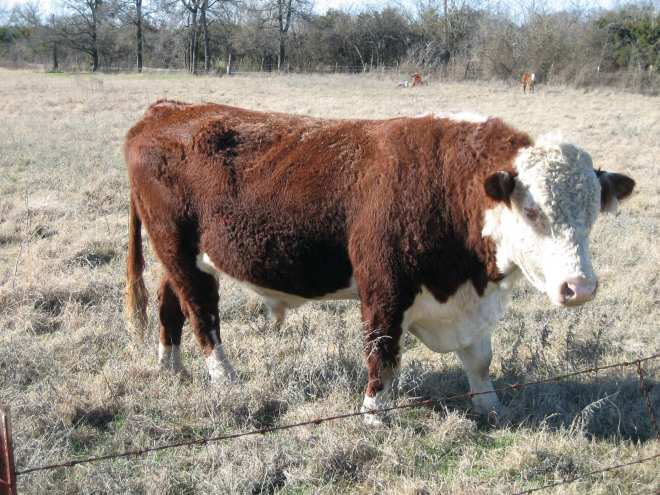 This is as far north as we want to get…..at least until May or June. Tomorrow we head south once again.

Oh yea, thanks for the great replies and comments yawl have sent…..or is it y-all? Hey…..we’re in Texas you know. Glad to see that folks enjoy reading about our traipsing around. Also thanks for all the great hints of things to see, places to eat and for sharing your own travel experiences. Little did we appreciate how well traveled you all…..y-all….whatever….. are. Keep the great suggestions, words of encouragement and comments coming!