Following a really nice week with Suziemand Co., we headed southwest toward San Diego. Since we are both originally from the southern California area we decided to forgo the state highways and make better time by sticking to the Interstates. Traveled I-15 into California and was stopped at an Agricultural Inspection Station. Since we had a trailer and since we were from Maine the authorities wanted to make sure we weren’t smuggling lobsters into California which would unfairly compete with their sushi. Actually they were more interested in Gypsy Moths…..after a 10 minute inspection we were pronounced clean and free to enter the state…..weird thing however, we crossed the California state line 20 miles back. I guess Gypsy Moths like to jump off closer to the coast. I wonder if they wear little Gypsy Moth sun glasses and Speedos?

Stopped near Barstow for a roadside lunch and rest break. There used to be nothing of much interest in Barstow and now, after 45 years, we have discovered that there still isn’t. Well unless you count the Worlds Largest Thermometer down Baker way.

Continuing on we spotted…..SNOW…..on the summit of Big Bear Mountain. It’s 82 degrees!

We did pass over that mountain range at Cajon Pass but no need for four wheel drive as the temps only dropped into the 70’s. I bet that snow was actually some Hollywood magic put in place for the next Rambo sequel. The downgrade was long and steep with numerous runaway truck ramps…..kinda disconcerting as we saw a huge motorhome that had apparently overheated their brakes and was up to the axels in gravel on one of the ramps. Seemed to be little damage except, probably to the drivers self esteem.

Since we were traveling near Riverside we took the opportunity to stop and pay our respects to Kit’s mom and dad who are buried in the Riverside National Cemetery. Kit’s father, Frank was a WWII and Korean Veteran with the US Navy. After his service he went to college, became a civil engineer and joined the California Highway Department (now called CalTrans). Kit’s mom was a registered nurse and worked at a variety of hospitals in the San Diego area. Great people both and they are sorely missed.

Paying our respects to Kit’s mom and dad

Getting near the coast we were amazed at how green and lush the hillsides were. Apparently they have had some recent rains as everything was growing or blooming.

Pulling into San Diego we stopped at Don and Char’s (Kit’s sister and brother in law) at their California home. Yep these are the same folks we visited in Kyle Texas a few weeks ago at their Texas home. We were once again offered space to park the trailer, but this time we enjoyed some “Curbside Surfing”. Worked perfectly except early on Sunday morning I heard a sound that went like; “Roar….Plop….Roar…Plop…Roar….Plop….etc.” I just had to investigate…..turns out it was the local paperboy in his souped up hotrod delivering a very large plastic wrapped Sunday paper. So much for Schwinn Newsboy bicycles!

Now since I promised Char that I wouldn’t write anything about her interior decorating, especially the Tub Bed…..I won’t because I really like her. Besides I have discovered long ago if you irritate you wife’s sister…..then you have automatically irritated your wife as well.

Sitting nice and cozy in front of what has been fondly known as the Taco Bell house for 25 years, we made ourselves at home for a week. Well, other than two meals with them, we were out running around the rest of the time. They were very busy at the time with a job transfer to Texas for Donald and last minute maintenance work on the house prior to putting it on the market. Since we’d spent a week with them in Texas recently, we think (and hope) they appreciated us “making ourselves scarce” during our San Diego week. 😉

Kit and Bill met in 1963 living two blocks away from each other and were the proverbial high school sweethearts. Our dating was a bit unorthodox as neither one of us had a driver’s license so I would ride my skateboard up to her house and bring a package of red licorice and a Pepsi to share with her. Occasionally, I would go farther afield by hitchhiking…..a much safer and commonly accepted practice back then. Although it was sometimes difficult to hitch a ride, standing beside the road with a 9 ½ foot surfboard…..but believe it or not folks would actually stop!

One of the highlight’s of our week was getting reacquainted with Kit’s friend Susan from 7th grade! Due to crazy circumstances, we had not even talked to each other since about January of 1965. We just reconnected a few months ago through Classmates.com! It was wonderful to see her and meet her longtime boyfriend, Rob. He and Bill hit it off great and Susan and I spent the evening catching up on our lives over the past 44 years. She and I met for dinner another evening during our week there to continue our catching up, which was a lot of fun. We invited them to come to visit us in Maine and hope they can make it. We always love sharing our “adopted hometown” with friends “from away” as we say in Maine. 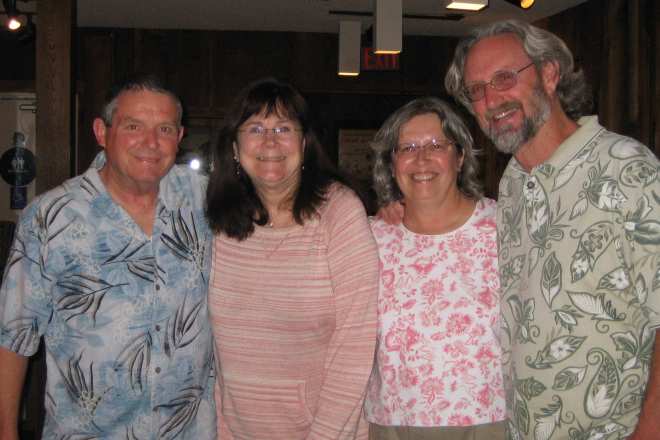 In addition we visited some former neighbors who lived across the street from us. Carl and Angie kind of looked after us young folks and we have remained in touch since. Carl was a WWII navy vet who served on a Cruiser in the South Pacific. He had retired from the Navy shortly after we moved into the area. We thoroughly enjoyed catching up with them and they graciously treated us to dinner at a local restaurant. 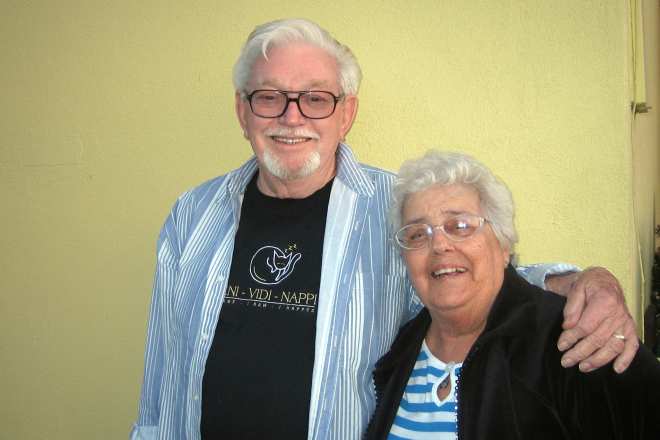 On another day we stopped to visit the parents of an old childhood friend who prematurely passed away last year. Bill and Mary Brunhoelzl graciously invited us to spend the afternoon in their home to relate stories of the old neighborhood and to reminisce about their son Billy.

The Brunhoezels lived two doors away from Bill and we all learned to surf at about the same time and spending many enjoyable days at Pacific Beach. The picture below, taken sometime in 1961 shows (left to right): Tommy Brunheozel, Billy Brunhoezel, Don Tucker and Bill Tucker.

Two of the four kids in the picture are now deceased…..Billy and my brother Don. There remains, however fond memories of growing up in southern California during the golden era of surfing and all the great times we had hanging out at the beach.

In order to give Char and Kit somequiet “sister time”, I took off alone on an adventure to Oceanside to see the recently opened California Surf Museum.

The museum was very well laid out and contained a lot of exhibits. The most interesting thing to me was the evolution of the surfboard from very large and heavy redwood boards of the 1920’s through the what became to be known as the longboard era to today’s very short and very light performance boards. 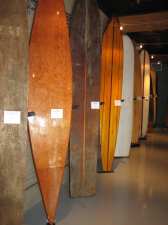 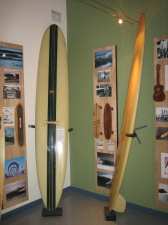 While talking to the women at the desk about my growing up in San Diego during the late 50’s and early 60’s the museum curator heard us and came out of her office. Being about my age we knew some of the same surfers that hung around. I also mentioned that I had some old surf movie posters, Surfer Quarterly magazines and board decals from defunct brands that I would be willing to donate. She was very interested and gave me her card. I’ll check when I get home to see if I can find any of that stuff from 45+ years ago.

In La Jolla I spotted this interesting sculpture on top of the San Diego Museum of Contemporary Art. It reminded me kayaking The Allagash, Moose and Penobscot River’s back home in Maine over the past 10 years or so. This is sometime the aftermath following the completion of a section of rapids. Is that John’s kayak stuck in the middle?

Later in the week we were able to hook up with some more family; The West Coast Herndon’s. Now, I would try and explain how we are related but that may take a page or two. Remember my bruzin Dewey…..well he is related as well. We had a great visit meeting at a very nice Mexican restaurant and then returning to Rita’s home for more catching up. Sitting are: Gale, Mike and Rita. In addition Rita’s friend Jeff, from San Francisco, joined us as well.

The weather in San Diego is as we remember…..pleasant, sunny and dry with bright blue skies and white puffy clouds, when there are actually clouds. The weather, the beaches and the close proximity to Mexico have long been the draw for folks looking for a place to settle. However a lot of folks have moved here over the years. There are actually more people in the city of San Diego then in the
entire state of Maine. Most of those folks have at least one car and most of those are on the freeway system at any given hour of the day. It is a bit unnerving to be traveling down a 12 lane highway in a group of about a hundred cars all within a cars length of each other and all traveling at 80
miles an hour.

San Diego was the pioneer for the Metered On Ramps. This system actually places stop lights at strategic on ramps and allows a few cars at a time to proceed onto the freeway. Kit’s father was on the team that planned the system and to this day it makes San Diego’s highway system one of the best in the world. He also was involved in the development of the Bots Dots…..those round (now sometimes square) bumps glued to the highway strips to alert a driver as he is leaving his lane of travel. 35 years ago he brought home a pile of Bots Dots to hand out to all the kids and grandkids…..I still have mine!

All in all however if I had to choose a large city to live in…..San Diego would be it!

One thought on “Bill and Kit’s Excellent Adventure Chapter 28”