Well it happened, this morning it is 36 degrees and at this very moment it is 43 degrees back home in Brunswick! Of course we are currently at 6300 feet, kind of like being on top of Kathadin…..where I bet it’s colder than either place.

This morning we took a walk around the campground and adjacent park. Returning to the trailer we enjoyed a great breakfast of eggs and chorizo, broke camp, and headed out. As we were pulling out of the campground we saw a gray fox dart across the road and into the woods; too quick to snap a photo however.

Pulled the rig onto US-260 heading west into the Sitgreaves Forest where we immediately came upon a “Watch for Elk” sign. Now…..you know, I thought I heard an elk bugling last night…..but then again it might have been Kit.

We headed for Overgaard, Arizona to search for the Lazy L RV Park where Mom and Dean used to spend so many enjoyable summers. We found the park but it was not open for the season yet. However the managers, Pat and Debbie let us poke around. We found mom’s former trailer which was in pretty good shape and on a great site. Talked to Pat and Debbie a bit and they both commented on how the missed having Dean and mom at the Lazy L.

Ironically the trailer is a Nomad, the same brand and size Kit and I had about 20 years ago…..you remember, the one I put on it’s roof going to a fishing trip up in northern Maine. 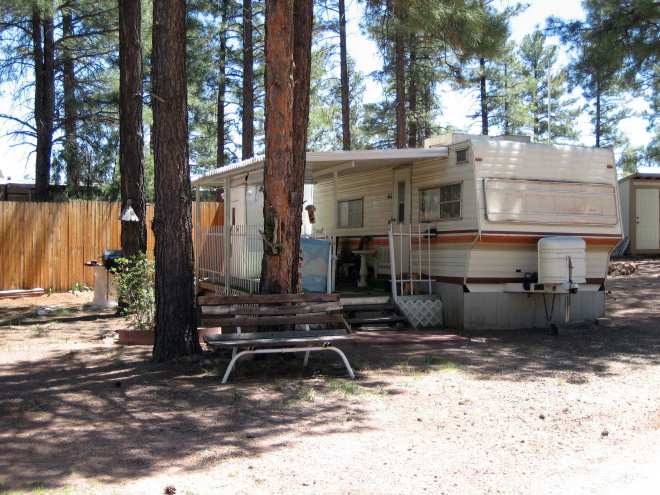 We moved onto I-40 heading west in order to locate Winslow, Arizona. I had this uncontrollable urge to stand on a corner in that town that had to be satisfied. And to sweeten the moment, there was a flat bed Ford at that same corner as well…..I had thought I’d died and gone to heaven! 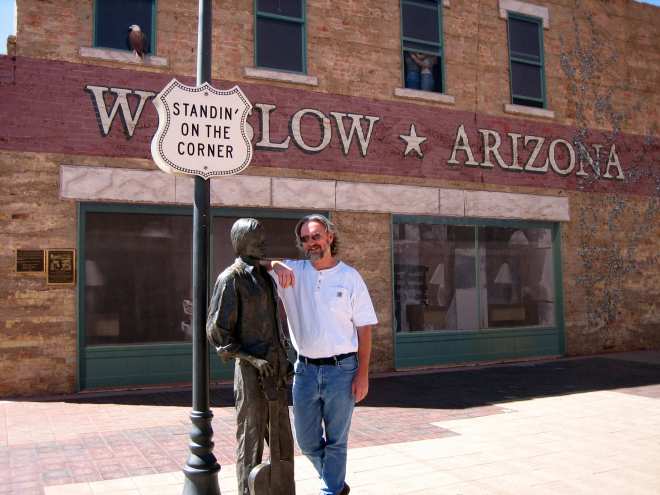 And such a fine sight to see. 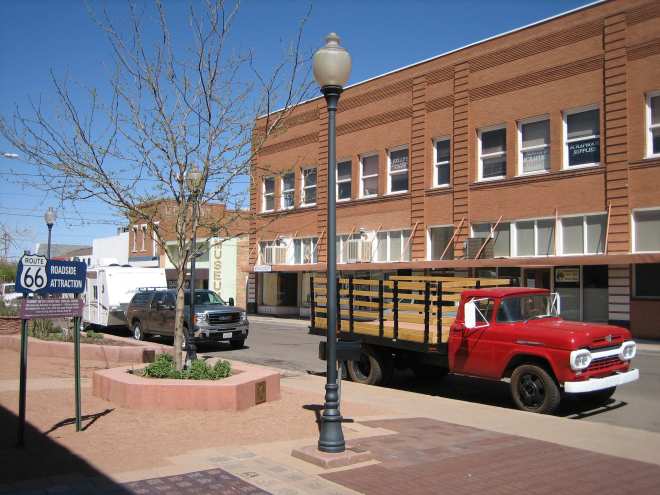 It's a girl, my lord, in a flatbed Ford slowin' down to take a look at me.

From Winslow we headed south on US-87 toward Cottonwood. As we topped out at 7500 feet elevation in the Coconino National Forest we encountered…..snow! However most of it was on the north facing hillsides and in amongst the trees. The temperature was 68 degrees.

Near Cottonwood we kept seeing references to the famous writer Zane Gray. Come to find out he had a cabin up on the Mogollon Rim that he used as a retreat from his digs in California. In fact the unusual topography of this area influenced one of his most famous quotes:

“The so-called civilization of man and his works shall perish from the earth, while the shifting sands, the red looming walls, the purple sage, and the towering monuments show no perceptible change.”

That was written in the 1930’s and still true of this area today.

Dropping down into Camp Verde at 3300 feet we were on the look out for a place to camp. And what do you know; in keeping with the weird campground names theme, we came upon “Dead Horse Ranch State Park”. Now this name has a story behind it as well; it is said that a horse died here some years ago. I guess there isn’t very much else exciting happening around these parts. The campground was very nice and we had a great spot. 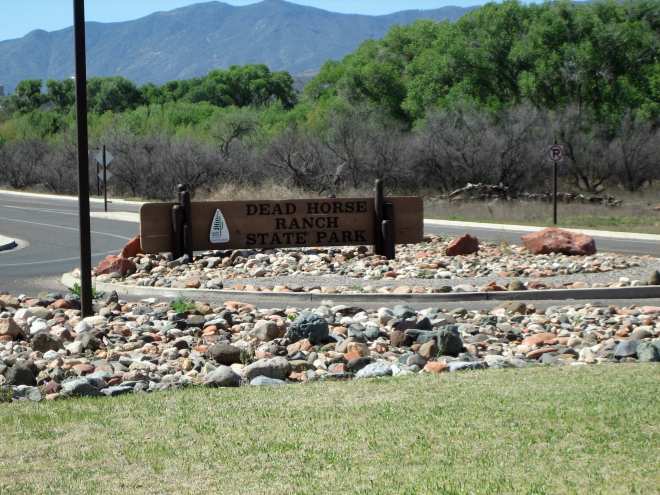 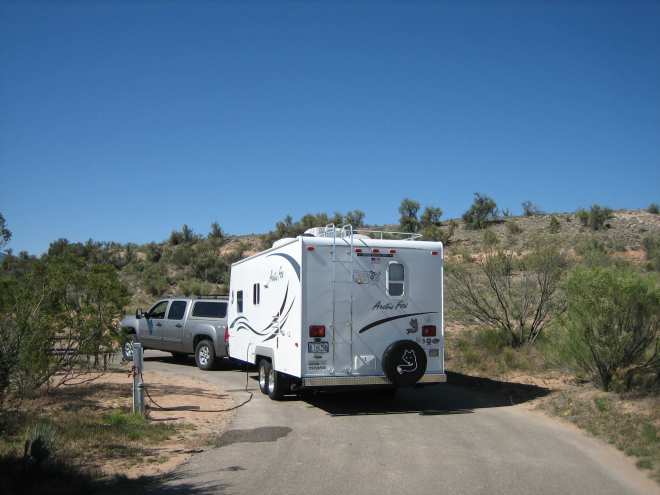 There were some multi use trails in the park that I explored on my bike. One went along the Verde River for a couple of miles and the biggest trail hazards were road apples left behind (no pun intended) by the equestrian folks that had passed ahead of me.

As I biked back to camp I passed the large group camping area and noticed quite a commotion going on. So being the nosy person that I am I rode down and talked to one of the participants. Apparently there was a “Return of the Elders” festival going on sponsored by some group called, The Institute for Cultural Awareness. As the young women put it: “Indigenous elders and future wisdom keepers are gathering to represent the voice of Mother Earth”. She asked if I would like to attend…..for $100.00!!!!! I politely declined and rode off. You know…..I didn’t see one “elder” in the whole place, just a bunch of hippie chicks. I guess the elders were too smart to pay a hundred bucks to sit in the weeds and talk.

Monday, April 20, 2009: Now the quickest (but as it turned out not the smartest) way to get from Camp Verde to Prescott, Arizona and then to points northwest is by taking US-89A through the town of Jerome, which sits at 5800 feet on the side of Mingus Mountain.

As we ascended the mountain toward Jerome we encountered steep grades, narrow roads and 10 MPH hairpin turns. I was having a blast…..Kit was as white as a ghost and had a death grip on the grab bars.

Entering Jerome we threaded our way back and forth through town, zigzagging along the main thoroughfare. It appears to be somewhat of an artist colony and filled with aging hippies. 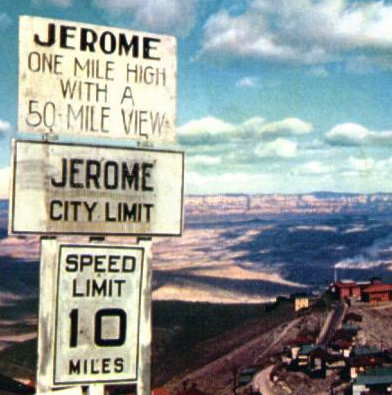 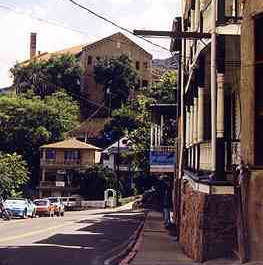 Leaving town we continued to climb up switchbacks until we reached 7000 feet where just as quickly we headed down encountering the same type of roads and grades. This is probably the third time I have had the familiar sensation of topping out on a mountain, not being able to see ahead because of the steep angle of the truck and then slowly rolling over the apex to see a steep down grade. I finally figured it out….it is the same sensation one feels in a roller coaster car as it peaks the first huge hill that sets up the rest of the ride. Not sure the highway planners gave thought to trucks pulling trailers when the laid this road down. We made it back to 3000 foot and straight level roads without a scratch however. The trip up and over was a bit unnerving but I guess that is the price you pay to travel the back roads. We stopped for coffee in Prescott and headed north to once again hook up the more sane folks on I-40.

Proving you meet the nicest folks in the most unusual places Kit and I had to make a pit stop and also get something for lunch. We pulled off the highway at the Jolly Road exit and stopped in a large field near a horse pasture. There was a car already there and as we climbed out of the truck they came over to meet us. Apparently the couple, Pat and Candace from Nova Scotia had noticed our rig back in Prescott and commented to each other that if they get into RV’ing that was the truck and trailer they would like to own. We spent about an hour showing them the trailer and sharing our personal histories. As they continued on their travels we agreed that when we get back to Maine and they to Nova Scotia we will have to plan a reunion.

Pulled off the interstate and onto US-68 toward Bullhead City, AZ/ Laughlin NV and then on US-163 west to US-95 north and on into Las Vegas.

We arrived late afternoon to the excited greetings of Jack and Tucker, who were standing watch for us at the front window!