Back in Las Vegas, and we are having a blast this time as well. Able to spend some more quality time with our youngest, Suzie and her husband Kevin and lots of play time with our two youngest grandsons, Jack and Tucker.

The grand kids now think that we do not own a home but live in the trailer full time. They love the idea so we didn’t see any need to correct them. Jack even camped out with us in the trailer which was once again parked in his parent’s dooryard. He slept through the night and it was fun seeing him wake up on the little bed that was converted from the dinette table. His little brother wasn’t quite ready to camp out yet but he did join us for breakfast which featured healthy vegetables. 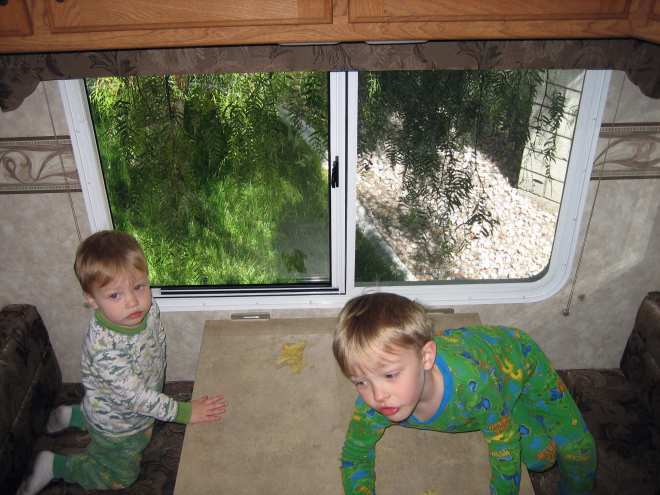 Jack and Tucker in the Trailer

Yea, those are potato chips the boys are having for breakfast…..they are vegetables, right?

All this was going on under the watchful eye of Guma from her normal morning position. 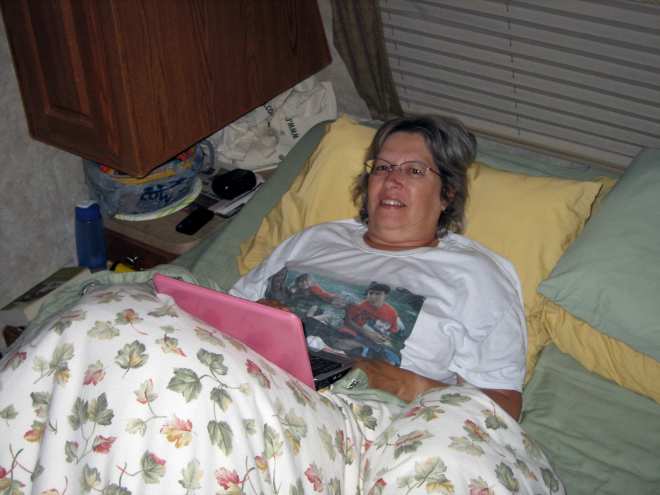 Guma with her Dell Mini 9 Netbook

Oh yea, Kit also took possession in Las Vegas of a long awaited, brand new, bright pink, Netbook. She ordered this new toy about a month ago from Dell and had it delivered to the kids’ house in Las Vegas so Kevin could check it out, remove all the clog-ware and load it with all the nifty applications only a computer expert would know about. The machine is pretty neat; inexpensive, solid state memory, light and small with a bright 9 inch screen. Basically nothing real fancy but a great tool for e-mail reading and web surfing. Kit is in Web-head heaven! And now, since I inherited the old laptop, I can get to the chronicling of our travels quicker…..or not.

We celebrated Suzie’s 38th birthday by going out to a really nice Brazilian Steak House. The food was plentiful and tasted incredible. The wait staff (called gauchos) kept filling your plate with an unbelievable variety of meats until you either became full or just needed to take a breather, at which time you turned a little token on your table over to reveal a red symbol which meant stop. Then after a while if you wanted some more, the token was turned over once again to reveal a green symbol and the gauchos made a bee line for your table and filled everyone’s plate. The other parts of the meal were displayed in an incredible 60 item salad bar where you could select whatever you liked; only the selections of meat were brought to the table to choose from. I have never experienced anything like it…..and I am somewhat of a professional eater! 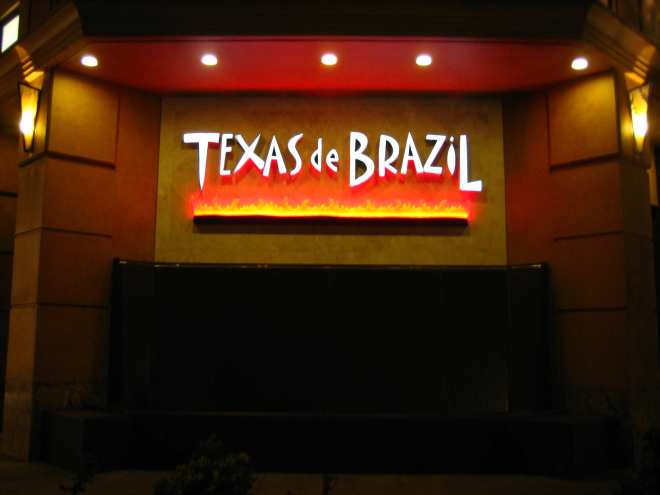 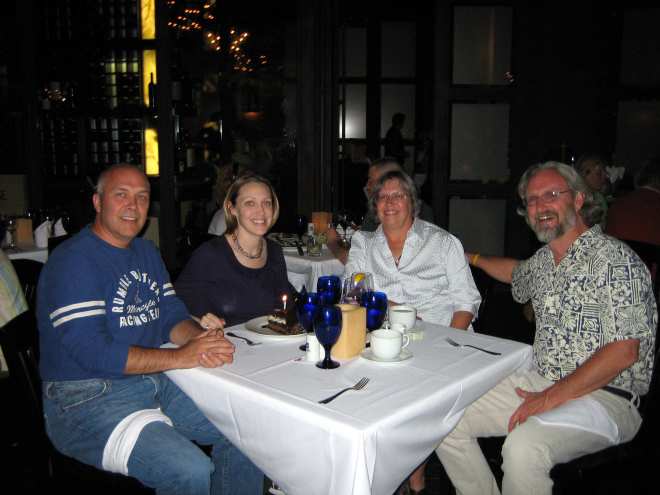 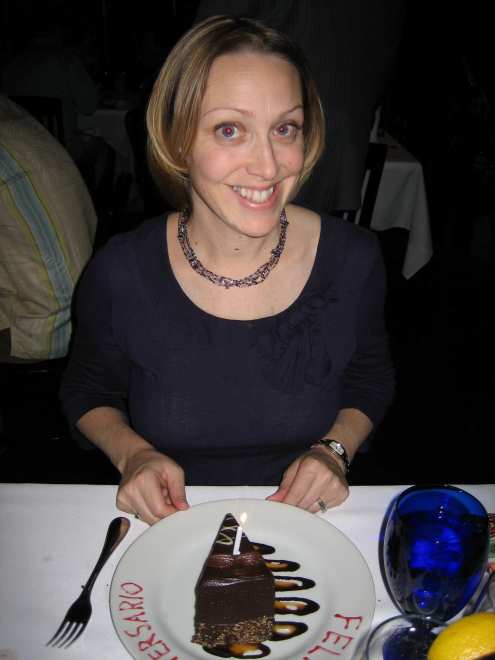 Everyone had a great time and after we waddled out of the restaurant Kevin and Suzie went home and we decided to walk the meal off by strolling around the Town Square, a really nice shopping area that looks like, well….a traditional old time town square.

While in town this week, Kevin set us up with a website and started posting all our past Travel Journals, including the ones from the Gofetchit Trip last fall. The site looks incredible and will give us a place on the web to archive all our travel journals for future retrieval and for anyone who has an interest, and may have missed the earlier journals from this trip, to be able to go back and read them. Kevin says it will be a lot easier for folks to read the journals on portable devices like his I-phone. When the site is fully ready for prime time I will send the URL thingie. Thanks Kevin for setting this all up and volunteering to be our Web Master person!

Another celebration was held as Tucker celebrated his second birthday on Saturday. Kinda neat, Tucker William Owens (TWO) turned two years old. We had a family party for him and he had great fun opening all his gifts. His favorite seemed to be the toy lawn mower which made lots of noise. Now, he can help dad keep the lawn in order. As you may recall, Jack is fully into The Superfriends but Tucker is still in transition so the party theme was half Elmo and half Spiderman; made for some unique and interesting decorations. 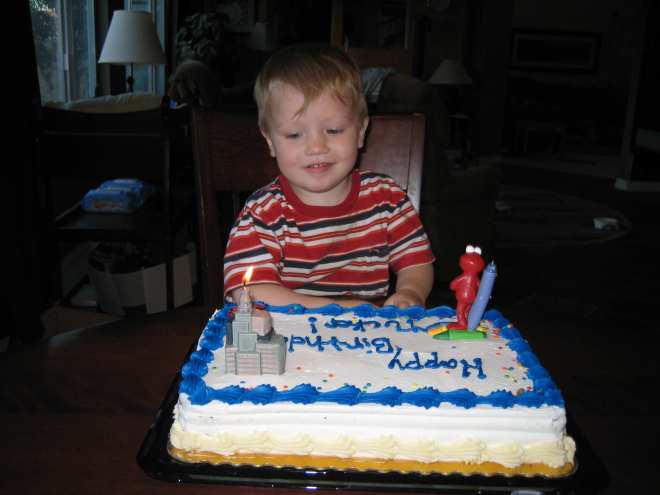 Can you tell what color the birthday cake frosting was?

Since Kevin works on the Cirque du Soleil show at the MGM Grand he was able to obtain two tickets to the Cirque show “Love” at the Mirage for us. 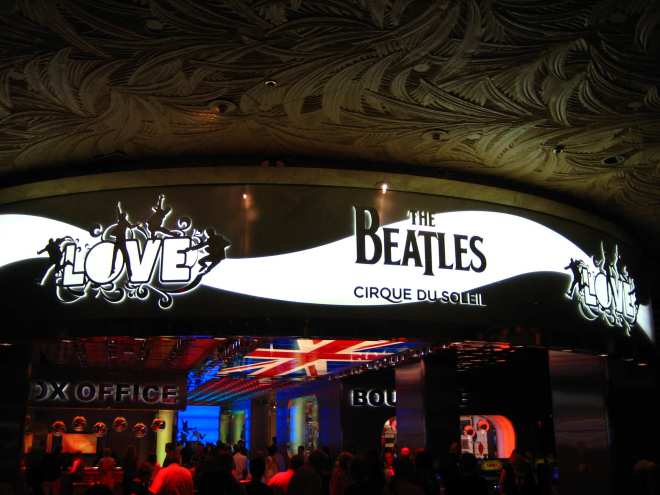 Other than visiting with family this show was the highlight of our stay in Las Vegas…..it was incredible! The score was a custom mixing of Beatle’s music done by Sir George Martin and his son Giles. Generally a stage show has a live band but music for this show was an incredible mix of original Beatles recordings from the Abby Road studios, some of which has never been heard publicly before. This unbelievable soundtrack provided the perfect accompaniment to the zany Cirque performance. To ensure a quality theater experience, a custom theater in the round was constructed with over 2000 seats containing over 6000 speakers; each seat had two speakers imbedded in the seat back at ear level and one in the back of the seat directly in front. Every seat in the place had the same high fidelity sound! Sergeant Pepper never sounded, or looked so good! Being Beatles fans as far back as the early 60’s, we really enjoyed this show and it appeared the sold out house did as well. If you get to Las Vegas this is a must see.

Here is another example of where one can meet the most interesting people in the most unusual locations. We were seated at the show next to a very nice younger couple from Nashville Tennessee. While waiting for the show to start we struck up a conversation and come to find out the fella was a published author with 40+ books to his credit. His name was Ken Abraham and primarily writes (or co-writes) biographies. His latest book to be released in June is on Buzz Aldrin. His other works include biographies of George Forman, Lisa Beamer, Chuck Norris and Payne Stewart. He was quite an interesting person to talk to.

After the show and not wanting the night to end we took a stroll down Las Vegas Boulevard to do some people watching and get a late night snack.

The whole evening was perfect…..Thanks Kevin!

Well, we leave soon to continue heading home so here are a few other unapologetic pictures of our two adorable Las Vegas Kiddles:

And here we are trying to surreptitiously sneak them into the truck so they can come with us.

Bye everyone!
Had a great time…..see you next winter! Or…..maybe in Maine this summer???

One thought on “Bill and Kit’s Excellent Adventure Chapter 34”