Still in Zion NP, we could stay here for a month! It is cooler today, 51 degrees at 6:00 AM and a bit breezy. Kit wanted to ride the shuttle into the nearest town, Springdale, Utah to just oz around a bit and “people watch” for Mormons. So I decided to tackle one of the more adventures hiking trails in the park, The West Rim Trail. The main trail has a spur that leads up to the promontory shown below; called Angels Landing.

I hopped on the shuttle to the trailhead and struck out atabout 9:00 AM. The trail climb’s 2400 feet in about 5 miles by way of a series of switchbacks called Walters Wiggles.

Threaded through a high altitude slot called “Refrigerator Canyon”. It is very narrow with high vertical walls on either side.
The sun only shines on the canyon floor in this section for a few minutes a day which keeps it many degrees cooler then the rest of the trail. 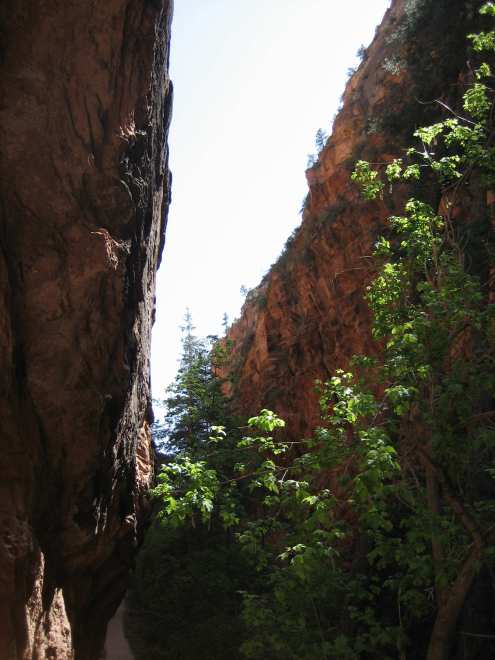 Decided to attempt the Angels Landing spur trail even though this sign seemed a bit ominous.

The sketchier parts of the trail have large chains to muckle onto which gives you a tiny bit of reassurance. 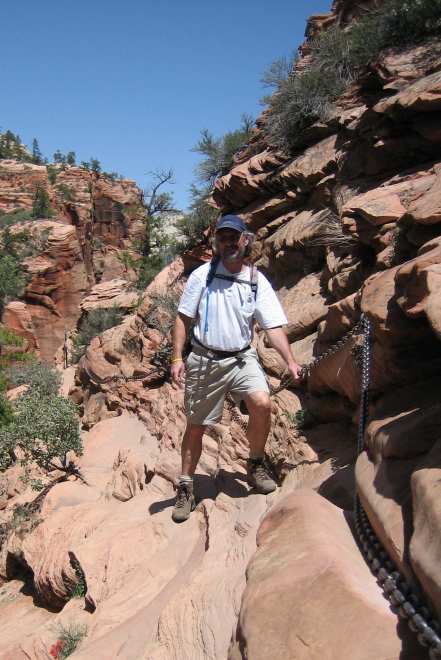 Even though I have a well known fear of heights and an innate love of staying alive I was doing OK until I came to this section about three quarters the way up Angels Landing Trail. 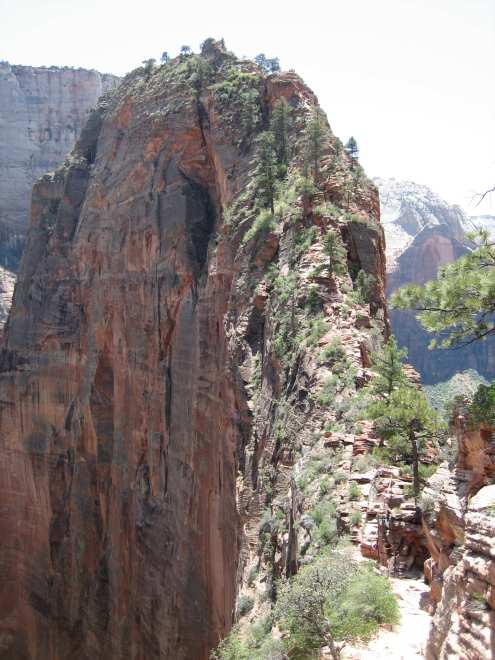 Yep….the “trail” goes right up that knife edge. Even though it was a bit breezy, I attempted it anyway. Then I came to a point where a few hikers were descending the narrow trail and realized that someone is going to have to let go of the chain, stand a few feet from a 1,200 foot drop and let the others go by. Coincidentally at about the same time the knot in my stomach got larger, my heart rate increased and my legs began to quiver a bit. Discretion overcame hubris and I turned around and led the group lower to relative safer ground.

Once back at the Angels Landing-West Rim trail junction I sat for a while, contemplated my next move and weighed the possibility of attempting it again. As I sat there I noticed many others that probably had the same thought process going on…..and most of them were in their 40’s, 50’s and 60’s. The only hikers that were attempting the trek were much younger. Figured there had to be a message in all that so I decided to continue on the West Rim Trail to the summit.

Here are a few views from the West Rim…..2,400 feet from the canyon floor. In the picture to the right you can see the shuttle bus road that I rode to the trailhead on. 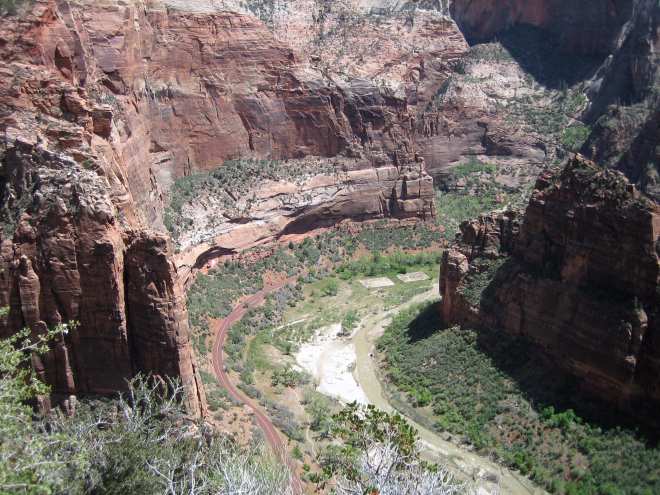 (Afterthoughts: As disappointed as I was in not making the top of Angels Landing I still feel weeks later that I made the right decision. Even now, as I type this my palms are sweating as the feeling of vulnerability on that exposed cliff comes flooding back into my consciousness.)

Another interesting personality I got to meet was this Buddhist Monk from “The Forest Temple” in Thailand. He was originally from Brem, Germany and was on a cultural exchange program sponsored by a California socialite. I hiked with him and his American guide far a while. What a fascinating character.

All in all it was a great day to be outdoors on a classic National Park trail.