The following photos taken along the Texas Mountain Trail should have been included in our last journal.  However I had a “Seen-your Moment” and forgot so I will insert them here.  A lot of folks believe the desert southwest is, well…..nothing but flat plain old desert.  However there are large mountain ranges that slice through the various southwestern states.  These pictures were taken in the Davis Mountains which is located near the Texas-New Mexico border and top out at an elevation of 6,300 feet. 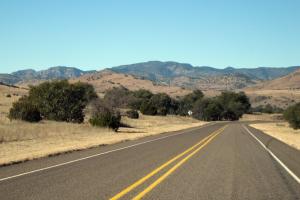 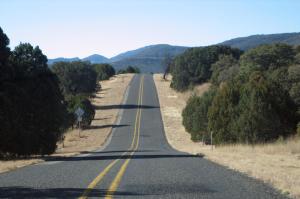 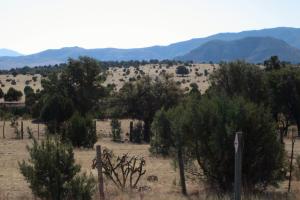 Saturday, January 16, 2010:  Stayed the night in a nice campground at Holloman Air Force Base outside Alamogordo, New Mexico.  We spent the morning at the Base Exchange and commissary to replenish our stores.  It was a nice mild and sunny day so I took the opportunity to wash all the accumulated road grime off the truck and trailer.  Here you see the job partially complete.  All the northern road salt combined with all the southern dirt road grime made for a pretty filthy unit.  I and the rig felt better after the pampering. 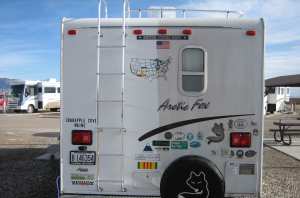 Our next major layover is in Tucson, Arizona, some 340 miles away.  And since our reservation at The Doobie RV Resort and Riparian Desert Oasis doesn’t begin until Monday, we decided to stay a second night at Holloman AFB to take in the White Sands National Monument.

Sunday, January, 17, 2010:  After a nice breakfast and the usual morning routine we headed for White Sands and stopped at the visitors’ center for a map and some information: 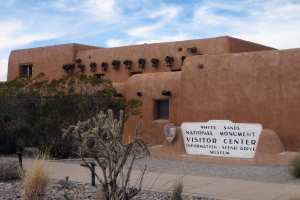 In the gift shop they were selling those round plastic snow saucers that we have all tried at one time or the other only to find out at the worst possible moment that you can’t steer the things.  Concerned that there may be a major snow storm I asked the lady what they were for.  She said they were for sliding down the sand dunes and that they sell about 800 of the things a month!

Driving along the park road we were struck by how the sand dunes looked like cresting ocean waves.  So, since I had my kayak…..and I haven’t been able to use it yet…..and I’m not too bright…..a perfect “Darwin Plan” was hatched.  Here is the sequence of events: 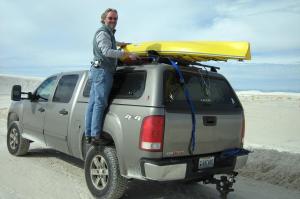 Try number one…..unsuccessful.  Stuck on the side of the dune like it was Velcro. 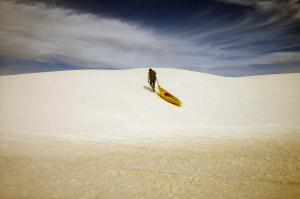 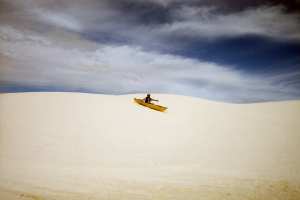 Try number two on a much higher and steeper slip-face.  Will he make it?  Betty won’t!  (I’m Will, Kit is Betty…..I change her name daily, makes for an interesting relationship). 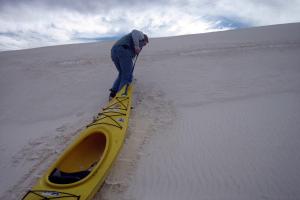 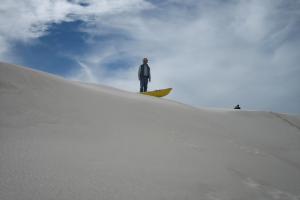 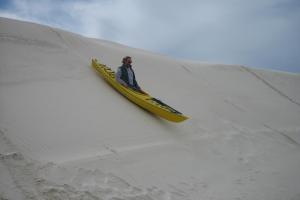 I shot out onto the parking area like the folks at the Toboggan World Championships upta Camden Hills back home…..much to the amazement of Kit and other onlookers.  Everyone who drove past looked at us kind of quizzically…..some stopped to take pictures.  What a blast, so much fun I had to do it a few more times.  Today’s shenanigans goes to the heart of one of my philosophies; you have to grow old…..but you do not have to grow up.

White Sands National Monument is a very interesting place.  It is nestled in a mountain ringed valley located in the northern part of the Chihuahuan Desert.  The sand is quite rare…..it is actually gypsum which normally dissolves in water; however there is very little water in this part of New Mexico.  And what does fall quickly evaporates or percolates down into the sand and is held in suspension.  On cold nights the water near the surface will freeze and the ice looks like nothing more than a lighter shade of the surrounding sand.  Here, Betty is picking up some ice for her evening Margarita: 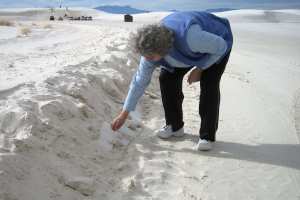 The dunes are a product of the winds and are constantly on the move.  The winds tumble the gypsum crystals until they become granular and the sand grains gang up on the normally flat terrain to develop into large mounds.  These dunes rise, shift and dissipate constantly with the wind.  Plants and animals have adapted to this unique environment.  The Yucca starts growing on the valley floor and as the dune is being formed the yucca grows higher.  It is common to see a 6 foot Yucca on top of a 20 foot dune……actually the Yucca is 26 feet!  When the dune inevitability moves on the 26 foot Yucca falls over and dies.  Below is a photo of a cluster of Yuccas awaiting their demise: 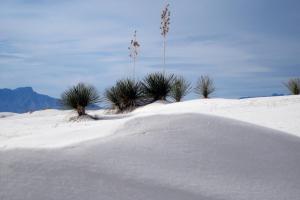 There are also Dogwoods bushes that take root on the dunes and as the dune moves on their roots hold onto a column of sand creating towers as shown below: 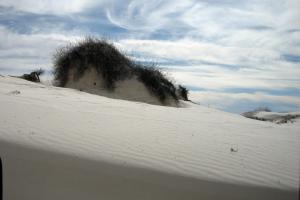 In addition most animals that live in the park have developed a camouflaging white hue to help them in hiding from predators.  Nocturnal, they are rarely seen, however their telltale tracks are evident at first light.

All in all, an interesting and fun place to visit.

Monday, January 19, 2010:  Up early and heading for Tucson in cool temperatures and light rain.  Hopped onto NM-70 and soon came to a large sign that read “Entering the White Sands Missile Range”.  Now this was a bit disconcerting in itself, however, the sign also said “Please Drive Carefully”.  I’ve driven in downtown Boston, this couldn’t be any worse…..and it wasn’t.  We made it without being pierced by any of the latest military hardware.

We moved onto I-10 to make better progress west.  We normally shun the interstates highways preferring to travel the back roads.  However, with all the small towns, rough roads and interesting things to see we don’t make very good time.  Normally this wouldn’t be an issue but we are getting anxious to see family in Tucson.

Entered Tucson from the south and stopped to see my mom who was recovering from a stroke at a local skilled nursing facility.  She has battled back from a few strokes in the past and appears to be improving from this latest one. 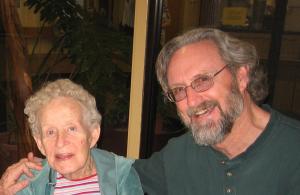 A very resilient and courageous woman, she has never followed the traditional path for a women reared in the 1930’s.  Those who know her admire the strong will and free spirit.  Raised in Philadelphia she left home at an early age to serve in the US Navy during World War II.  Settling in San Diego as a single mom of a herd of boy’s we didn’t make life easy for her.  She did have a totally optimistic outlook on life and a very strong faith.  All “her boys” turned out pretty well…..even little black sheep Billy.  Until old age began to take its toll a few years ago, she was the ultimate “Party girl” out dancing most nights and enjoying the company of her many friends in Tucson.  A bit incapacitated now, she still has her famous smile and that old twinkle in the eye.  We love her very much.

Arrived at the Doobie RV Resort and Riparian Desert Oasis around 1600.  This incredible facility is very exclusive; consisting of only one camp site it is very accommodating and it its guests are pampered and well cared for.  The resort is owned and lovingly managed by Dewey and Bea, accomplished hosts and all around great folks.

Will, or whatever this guy’s name is, has pretty much covered it all.  About all I can say is, we had a nice stay at Holloman AFB – had fun at the “dunes” and I was eager to get to Tucson to see family.

Stay tuned for the doings in Tucson,