Disclaimer-We are keeping a travel journal for our enjoyment in later years and to share our life on the road with family and friends.  If this is of no interest to you please feel free to delete without reading.  You will not hurt our feelings.  We are giving these travel notes wide distribution so we do not inadvertently leave anyone out.  Also please feel free to forward these journals on as you wish.

Friday, January 8, 2009:  Well we made it!  Woke to 20 degree temperatures and it was 12 degrees in Brunswick.  Finally…..warm weather!  Well at least warmer than home and being the optimist that in itself spells sucqsess!  You know… the word “optimist” always intrigued me.  Sounds like it should be the brand name for glasses one would wear in the fog to see well.

Anyway, the Artic Fox, true to its name, was smart enough to keep us warm and cozy.  Being a four season trailer with heavy duty insulation, large capacity heater, Thermopane windows and heated holding tanks it proved up to the challenge.  I didn’t hook up the water hose as I didn’t want to futz around with the heat tape which would have been necessary to keep the external water hose thawed.  We used a few gallon jugs of water we had brought along in the cab of the truck for our overnight water needs.  All and all everything worked well.

Lounged around camp until about 1000 then hit the road after filling a depleted propane tank.  The tank wasn’t full when we left Maine however having two 30 gallon propane tanks and an automatic switchover regulator provided us with uninterrupted heat throughout the night.

Back on I-81 toward Hattiesburg, Mississippi where we passed close by Lake Forgetful.  Legend has it the lake got its name from the many boaters that forgot to install their drain plugs before launching.  They had to relocate the boat launch three times due to the sunken hulks scattered about.

In Hattiesburg we jumped on US-98W for about an hour.  Passing through Columbia, Mississippi we came to a large field chock full of FEMA trailers.  There must have been hundreds of them…..rotting away in that field, kind of a waste.

Stopping at a traffic signal in small town a car pulled up alongside and motioned to roll down the window.  He was a retired Marine and had noticed my Navy and Viet Nam stickers on the back of the trailer.  Had a nice chat until the light turned green and the horns started blowing.

If the south is the Bible Belt then this area of the south must be the Bible Buckle!  Every few miles there are huge crosses (some 50 plus feet tall), houses of worships as big as the entire town and billboards extolling the power of Jesus.  As a strange juxtaposition there are as many bars, billboards advertising law services to help with divorces and DUI’s, roadside “Exotic Dance” places and smaller signs advertising “Slap Yo Mamma Hot Sauce”.  Gotta try some of that…..not all the above, just the sauce.

We then hopped on I55S toward Hammond, Louisiana where we had arranged to meet some good friends from our earliest Navy days.  Meeting Eileen and John Laurences at a Cracker Barrel for lunch was a must do as we were passing close to their home in Covington, Louisiana.  We had a great visit, catching up on all the news.  John had just retired from Government service and they both appeared to be enjoying the good life.  Upon leaving I asked one of the Cracker Barrel staff to snap this picture of us. 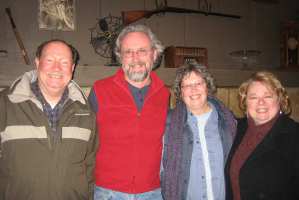 Jumped on I-12W and stopped for the night at the Frenchman’s Wilderness Campground in Breaux Bridge, Louisiana.  It was 1930 and the temperature was in the 20’s.  All the pipes in the park were frozen and no one had water.  Now one would think that an area that experiences hurricanes wouldn’t freak out about a little cold weather but everyone was dressed as for an artic expedition and came out of their warm buildings as little as possible.   I mentioned to the campground manager that I saw people ice skating on their “cement pond” but she didn’t laugh…..just got up from behind her warm desk and peered out the window.

She let us stay the night anyway.  All we needed was a flat spot to park but we did connect to shore power to avoid using the batteries.

Speaking of batteries, learning from our dry camping experiences on previous trips I installed a second deep cycle battery over the summer.  I wired both batteries through a marine grade A-B switch so we can run on either one, both or shut the batteries off.  This improvement should give us up to 5 days of power when needed.  Here is a picture of the set up:

Saturday, January 9, 2010:  Enjoyed a very warm and restful night.  It is still warmer here than back home…..22 degrees vs. 19 degrees.  We did notice the sad news that was racing around the internet…..Mr. Art Clocky had passed away last night (go ahead…..Goggle him, you know you want to).  The passing of a great American is always hard but his contributions to the acceptance of minorities was unheralded.  The funeral will likely take awhile as mourners passing his open casket won’t be able to help themselves and will be overwhelmed by the urge to place his limbs in unusual positions.

After breakfast and checking e-mail we packed up and hit the road by 0900.  The Southern Palms are taking a hit due to the cold snap.  All along the road there were trees in distress such as this:

Crossed into Lake Charles, Louisiana.  There are oil and petrochemical refineries as far as the eye can see.  I bet gas is cheaper here.  Nope…..$2.67…..just about the same as in the middle of nowhere.  Why are prices the same regardless of the distance to the source.  Discounting The Gulf, of course.  By my estimation the transportation distance from the refinery to the nearest gas station was about 35 feet!  Speaking of fuel prices, so far the per gallon price has ranged from $2.49 in New Jersey to $2.76 in Pennsylvania.

Crossed over into Texas mid day and Lucy became hopefully lost in Houston.  Then we realized we were riding on a brand new highway.  Lucy’s database is about two years old….she was hysterical in informing us that we had left the road.  Good thing we had let our On Star subscription lapse or I’m certain 911 would have been called.

Noticed some albino cows in Katy, Texas.  Not really interesting…..just kinda funny looking.  I wonder if that’s where the “other white meat” comes from.  It was kinda sad actually, as all the black cows made them graze at the back of the field.

Passed a number of game preserves advertising a day of hunting for a fee.  Apparently these are big business in these parts.  They use a sophisticated system of various height fences to coral the deer and other game in specific areas.  Your hunting fee determines the perimeter which you may hunt.  The further out from the center of the preserve the larger the animal.  Seems kind of funny they are called game preserves when you can shoot them.

Stopped at a grocery store by the name of Heb.  As Kit shopped I poked around to determine the origin of the stores name.  Apparently the patriarch of the family was Harold E. Butt and he started selling dry goods around 1907.  Old Harry, realizing the buying public may not warm to his name decided to use his initials…..H.E.B.

Pulled into Kyle, Texas and the home of Kit’s sister Char and her husband Don for some fun with the Crowe’s and a little door yard surfing.