Tucson, Arizona, January 18 to January 27, 2010-Part Two:  While visiting Tucson we enjoyed some great Mexican Meals.  Some were homemade by Senorita Bea which were, by far, the best ever and some we enjoyed at the various restaurants that only locals know about.  Here Kit is enjoying a Sonoran Hot Dog at one of the “trucks” that set up shop in parking lots throughout Tucson.

This delicacy consists of a hot dog wrapped in Mesquite bacon and grilled over an open flame.  It is then bedded in a large bun with chopped tomato’s and onion’s, cotijo cheese, tomatillo salsa and pinto beans.  It is served with a side of fresh grilled jalapenos and Mexican onions.  There is a “relish bar” containing dozens of different vegetables and sauces including my favorite, pico de gallo.

Most folks believe the Sonoran Hot Dog derived its name from its birthplace of Sonora, Mexico.  However Kit proved on the way home that it really is named after the effect it has on the diner…..she was snoring all the way home.  It worked in our favor however because traffic pulled over and cleared out of our way as we motored along.

Sunday, was our other brother Dan’s 46th birthday.  We were all invited to the hotel where he works, the Hilton El Conquistador Resort, in order to enjoy their famous breakfast buffet.  If it even loosely could be called breakfast fare it was on the menu.  We had a great time gorging ourselves and then as a special surprise to Dan all of his fellow cooks, led by the resort’s Executive Chief, surrounded our table and presented Dan with a cake and candles.  We all sang Happy Birthday to him and several of the other diners joined in as well.  And as an added treat, the resort comped our meal!  Fully satisfied we decided to stroll the beautiful grounds of the El Conquistador.

Back at the camper I signed on to the internet and discovered an e-mail from square dance friends’ back home.  They were in Lakeland, Florida attending a large square dance weekend and sent the following photo of a street sign they came across.

Reportedly it is on a one way street, full of pot holes and leads to a dead end.  Yea…..sounds about right.

Kit and I attended this same dance last year and had a blast.  We decided to pass this time so we could take a more westerly track…..and, besides, it was freezing down in Florida!  We do look forward to joining our square dance friends at Winterfest in Lakeland, Florida next year however.

In downtown Tucson there are a lot of unique homes where residents have let there whimsy direct their building style.  The photos below show one such house.  Reportedly the artist homeowner has been working on the place for a number of years and in fact was busy on a section of the lower wall as we drove by. 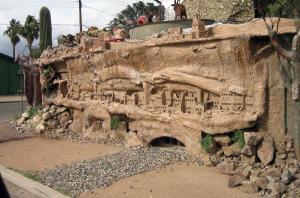 We have been in Tucson for 8 days and although we had a blast seeing family and the sights it is time to move on.  The plan is to head west to San Diego then up to Las Vegas before returning to Tucson in about four weeks.

Wednesday, January 27, 2010:  Underway at 1000 after stopping at an RV center to dump tanks and fill a tank with propane.  We did discover in talking to one of the workers at the RV center that several celebrities keep their motor homes in storage here including BB King and Will Smith.  The latter was a totally custom unit that telescopes up making a second story.  He wouldn’t let us take a look at either unit however he did show us a $750,000.00 motor home with an attached enclosed toy hauler that belonged to a prominent Tucson citizen.  It was pretty incredible.

We headed into southern Tucson to see mom once more before leaving town.  She was tired and didn’t seem to have made much progress in the last 24 hours but her famous smile and that twinkle in her eye was working just fine.  After insuring her we would be back we got on the road once again.

Headed out of Tucson on the Ajo Highway (AZ-86) which parallels the Mexican Border and travels through a number of Indian reservations.  If you have spent any time in Indian Township up to Maine then you know how these places look.  The only real difference is cactus instead of trees.  We have noticed that the nicest American Indian communities seem to be nestled around casino’s…..must be a message there somewhere.

We noticed a number of wide spots along the road where the weary traveler could pull over for a rest.  Most featured telephone booths with the Spanish name for telephone, “Bano” on the door.  We had cell phones so didn’t need to use them.

Passed Kit Peak which had a lot of antennas and domed buildings on its summit.  Probably an observatory as there is nothing for miles around so the night sky has very little light pollution.  Put it on our Life (Bucket) List to check out next time we are in the area.

Noticed a lot of Saguaro cactus along side the road.  These icons of the American Southwest are very slow growing.  They don’t develop “arm’s” until they are 60+ years old and at 200+ years they get to there full height of about 40 feet……unless they are blown over first. 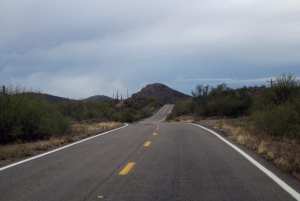 Entered Ajo and were stopped by another Border Patrol checkpoint: 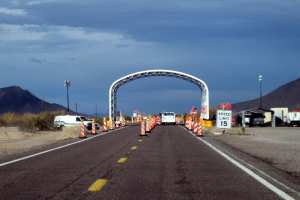 The agents are always friendly and usually only ask if we are US citizens, where we have recently traveled and if we keep the camper door locked.  These encounters do give me the opportunity to impress them with my mastery of conversational Spanish which I learned back in junior high school.  At this station the two agents started talking Spanish to each other.  The pace was too fast for me to catch what they were saying…..the only words I caught were “gringo”, “loco” and “cabeza”.

There was a large sign at the checkpoint that listed their results for 2009:

Pretty impressive for an established checkpoint!  I wonder how successful they would have been if they went 200 feet into the desert?

We decided to hop on I-8W as it is getting late and we have no idea where we will camp tonight.  Interstate 8 has a 75 MPH speed limit…..and a bike lane!?!?  Honest!!  We headed into El Centro and stopped at the Navy Air Facility to see if they had any room at their campground….nope, full.  Then we checked a commercial campground down the street…..nope, full.  Darn Snowbirds!  By now we were running low on gas so we decided to retreat back to El Centro.  When I filled the tank I was startled to find we would have only had 1.5 gallons, or approximately 15 miles of fuel until empty.  Close call….too close.  I need to see about adding an auxiliary tank to my truck if we continue to travel these back roads in the southwest.

It is now 2230 and we are both very tired.  Kit looked up a Wal*Mart on the computer and we headed there for the night.  On the way we found a Costco and noticed about a dozen other RV travelers already in for the night, so we decided to join them.

Thursday, January 28th:  Woke to sunny skies and temperatures in the mid sixties.  We noticed that the Wal*Mart was next door and it contained another dozen or so RV’rs.  Both parking lots were level, well lit and patrolled by security.  We had a restful night and the price was certainly right!

Pulling out of Costco we decided to treat ourselves to breakfast at IHOP.  After a great meal we continued on I-8 toward San Diego.  As we neared the Navy Air Facility we noticed four planes flying in formation.  As we got closer we realized that the planes were F/A-18 Hornets and were painted with the colors of the Blue Angles.  NAF El Centro is the winter training ground for this world famous flight demonstration team.  The formation was kinda ragged so I’m guessing there were a couple of rookies in a few of the planes.

As we headed west into the Imperial Valley we noticed mile after mile of crops, irrigation canals and farm workers picking in the fields.  This climate, except for the lack of naturally occurring water is superb for growing vegetables.  The water of course is diverted from the Colorado River.

Passing through Plaster City, California we noticed a sign that said we were now at sea level…..but not for long as the Laguna Mountain range loomed ahead.  Entering the mountains we encountered an 8 percent climb and signs every 300 yards that said “Radiator Water”.  The assent seemed to go on forever and the readout on the trucks dash dipped to 4 MPG.  Finally we topped out at 4,140 feet.  From sea level to over 4,000 feet in 35 minutes and the temperature dropped 12 degrees!  This pass through the Laguna Mountains is called the Tecate Divide.  Scientists claim that beer spilled on the western slope flows to the Pacific Ocean and beer spilled on the eastern slope is quickly consumed by all the illegal’s in the area.

Dropping into San Diego we were surprised by how clear the air was.  We could actually see the ocean from the foothills of El Cajon.  In addition everything was green and lush.  Apparently they had a substantial amount of rain this winter…..a rare occurrence.  San Diego is our original hometown; both Kit and I grew up, attended high school and were married here and we still have family and many friends in the area.  Even though San Diego has fond memories for us we doubt we would ever move back.  It is a beautiful city but a bit too crowded for our liking.  How crowded?  The city of San Diego has more people than the entire state of Maine….even if you include all the moose!  As a comparison between our old hometown and our new hometown here are a few statistics I picked off the internet:

OK….so our adopted hometown of Brunswick, Maine is colder, wetter and older, however we are content to spend most of the year there.  Now about those winters…..you know, there is a reason we head south, then west when the temperature, and snow, begin to fall.  It is said that so many retirees from Maine head to Florida for the winter that the average age in Maine lowers to thirteen until spring…..and Florida’s average age increases to one hundred and seven.

We tried Florida last year for a few weeks…..it was warm, nice and featured a lot of activities and attractions to keep one busy.  However since some of our family lives west and since we personally like the weather and terrain of the southwest we choose to winter over here.   I hope the East Coast Retiree Relocation board doesn’t get wind of our escaping.  There is apparently a requirement that all Mainer’s over the age of 62 must move to Florida for the winter.

Anyway…..lost in thought about all the above we drove through the city of El Cajon toward Mission Valley.  We pulled into Admiral Baker Field in Mission Gorge around noon where we plan on staying for the next week or so.

Kit’s Corner:  That Sonoran hot dog was yummy!!!  I could have eaten a couple more but decided against it.  Camping in Tucson, especially at Dewey & Bea’s place is delightful!  The company is great, the weather is great and it’s good to be with family.  Coming over the Laguna Mountains into SD was so nice and clear.  I always forget how beautiful it is here till we return.  Of course, it’s crowded but just seeing the ocean, the hills and valleys brings me back to when I was a kid.

Stay tuned for more stories of Bill and Kit in Retireeville!