The city of San Diego lies on deep canyons seperated by mesas.  This unique geography creates a natural seperation between the 200 some distinct communities.  When we were kids back in the 1950’s most homes and businesses were located on the mesas or along the relativly flat coastline. The canyons were home to a few farmers and ranchers but otherwise were generaly left in their natural state.  The many canyons gave the city a segmented feel, creating gaps between neighborhoods so it didn’t feel like a large city…..still doesn’t.  The San Diego River runs through the middle of  the city creating an area called Mission Valley where we are camped for the week.

The downtown portion of the city lies on San Diego Bay which is created by the Coronado peninsula and Point Loma.  The bay eventually leads to the Pacific Ocean making for a long “sea detail” for navy ships sailing from the Navy Base in the southern part of San Diego Bay.

Downtown San Diego has been restored and gentrified over the years and now is a thriving commericial, business and residential area.  It is one of the cleanest and most pedestrain friendly cities in the nation and boasts a new mass transit rail system that connects downtown with the outlying communities and the Mexican border. 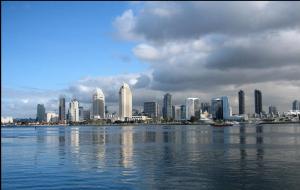 In the spirit of full disclosure the above picture of downtown San Diego is a stock photo off of the internet.  I couldn’t tread water out in the bay long enough to snap a photo of my own.

We are staying the week at Admiral Baker Field, a Navy recreation area that has picnic shelters, a campground, ball fields, tennis courts, a large swimming pool (closed for the winter?!), and what looks to be a very nice golf course with a clubhouse, restaurant and tavern.

I remember my mom bringing my brother Don and me here to swim and picnic.  One of my proudest childhood moments was when I mustered up the courage to leap off the high dive.  Unfortunately both diving boards have been removed; probably due to our overly litigious society.  However a large water slide was put in its place.  Now let’s see parents sue because poor junior got water up his nose coming down the slide.

We rarely make reservations for campsites.  Primarily because we are never sure exactly where we are going or when we might get there.  For the most part this method of traveling has not been a problem but occasionally we have to go into an “overflow” area.  Such was the case at Admiral Baker Field.  The “full hook-up” sites were already taken so we went to the overflow area which turned out to be a lot quieter, fairly private with a nice view of the river area.  Due to the recent rains there was plenty of water in the river and listening to it babble through the narrows was very pleasing. 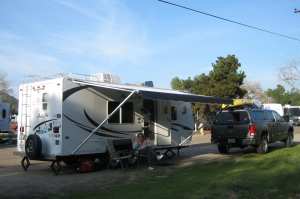 Friday, January 29, 2010:  This morning a full hook-up site became available.  We turned it down as I had already disconnected the truck and we were perfectly content to stay where we were.  However, since we intended to stay in San Diego for a week or so and being that we would be without electric, water and sewer connections we had to get creative.  I predicted we would have plenty of water in our tank to see us through if we showered at the campground facility.  I knew from past experience that we had plenty of gray and black water holding tank capacity.  So the only issue was electrical power and since installing the second battery last year we had extended our dry camping capability to 5 days…..if we conserved.  That still left a few days where we might be short on electrical power.  So I did what any sensible male would do.  I went out and bought a machine; a Honda 2000 watt portable generator.  It’s really neat…..light weight, runs a long time on little gas and it is very quiet.  Now we are all set for our remaining time in San Diego as well as most any other dry camping opportunity that comes our way.

While out getting the generator, Kit wanted to stop by the grocery store and pick up a few things.  So I did what I do best and stayed out of her way.  After a few laps around the parking lot I returned to my truck just as another GMC Sierra pulled up.  Seeing a kindred spirit I waved and the other guy and I stood around making small truck talk.  Then, an SUV pulled up and out came two other guys.  One was dressed in a suit and was carrying a microphone while the other was more casually dressed and wielded a camera.  They were from the local NBC affiliate channel 7 and a reporter named Bob Hansen (Consumer Bob) asked if he could interview us about distracted driving.  Even though we were heavily engaged in distracted parking we both agreed.  Of course all this commotion drew a small crowd and amongst the gathering was a young woman by the name of Jessie that excitedly proclaimed she was in San Diego as a member of the US Navy but was actually from Biddeford, Maine.  We all had a grand old time visiting and swapping stories.  Not sure if my fifteen minutes of fame actually made the evening news but it was fun thinking that it had.

We still have some family in San Diego as well as childhood friends in addition to some newer friends from back in Maine who are now living here.

Two of the latter are Marie and Scott Freiberger.  I worked with Scott before my retirement and they recently relocated to San Diego to take advantage of a promotion opportunity.  Scott and Marie invited us to their very nice apartment in Mission Valley for dinner.  We had a nice visit catching up on who was doing want, discussing how well they liked San Diego and letting them know the latest news from Maine.  Marie made a great meal and Scott was in his element at the barbeque grilling the biggest steak I had ever seen.  Kit and I really enjoyed their hospitality; we had a great time with some great friends.

Saturday, January 30, 2010:  This next morning I was out on my daily walk and decided to go up the hill to a mesa that should afford a nice view of Mission Valley.  There was indeed a great view from that lofty vantage point so I snapped the first photo and then later on, returning under a full moon, I snapped the second.  In the daylight photo you will notice our campground home at lower center of the picture.

We spent the rest of the afternoon shopping and preparing for a special reunion coming up tomorrow.  And that evening we joined a friend from the old neighborhood Alan Clendenon and his wife Linda at a local eatery called The Islands.

Alan and my brother Don were best friends growing up In the Serra Mesa community of San Diego.  Serra Mesa is located just above the Qualcomm Stadium which hadn’t been built when we lived there.  Being a few years younger than us Alan and Don used to follow Kit and I around when we were “dating” and we would constantly chase them off.  I put “dating” in parentheses because we were 15, barefoot and my mode of transportation was by skateboard.  Anyway, Alan and Don joined the US Army together under the Buddy System.  Alan went to Vietnam and Don went to Alaska.  Alan returned safely to the US and Don stayed in Alaska where he created a new life for himself.  Don prematurely passed away in 1983 after living an interesting and exciting life.  Kit reconnected with Alan on Classmates.com and we enjoyed hearing his remembrances of Don and swapping tales of our teenage years while enjoying a nice meal with great company.

Sunday, January 31, 2010:  We arranged to host a family get together at the campground.  John Davies, Kit’s brother and Mary Davies, Kit’s (former) sister-in-law joined us with their daughters, Italia and Alicia and Italia’s daughter Cloie. 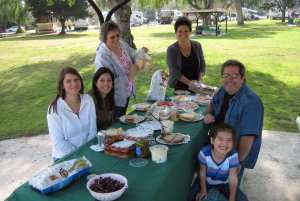 Cloie is so cute she deserves her own separate picture:

Kit’s Corner:  Imagine my surprise when, on Dec. 27th, just a week or so before leaving on our trip, I received an email from my sister-in-law Mary!  She had contacted me through Classmates.com.  It had been 13 years since I had seen my brother and his family.  Needless to say, I was excited to hear from her and after a few more emails and phone calls we were finally able to connect up.  It was wonderful to meet Cloie, Italia’s daughter; she’s quite a little spitfire, very friendly and eager to get to know us.  She was thrilled since this was her first “real picnic”, other than at Costco!  She played on the play equipment at the park and spent the afternoon visiting with all of us.  Quite the cutie!  Of course, we absolutely fell in love with her!

It was wonderful getting reacquainted with my nieces, Italia and Alicia!  Both are totally delightful and lots of fun to be with.  Learning about their lives, jobs, what kinds of things they enjoy doing was quite a treat!  We’re definitely looking forward to spending more time with them.

Of course, seeing Mary (she has been part of our family since her early teens) and reuniting with my brother John was very special.  After so much time without contact, it felt good to reconnect with all of them, and especially to meet Cloie!  Sometimes, it takes a little time for some of us to “mellow out”, (even me)!  J  All in all, we had the most wonderful day and are looking forward to spending more time with all of them, either in San Diego, Maine or Las Vegas which they all frequent regularly for entertainment and shopping.  Thank you Mary, for sending that email!  You have no idea how much it means to us, and we love you all!

That evening we joined an old friend of Kit’s from high school, Susan Foster at a neat Mexican Restaurant in University City called Cozy Mel’s. 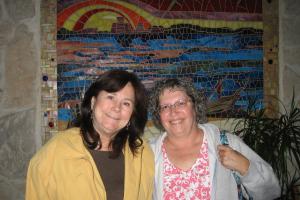 Kit’s Corner:  Susan and I had reconnected last year while we were in San Diego.  We’ve known each other since 7th grade but lost contact in January of 1965 during our Junior Year in high school.  We too connected through Classmates.com.  It was great to see her again; we had lots of catching up to do with our families, kids, grandkids and so on.  It’s always nice to visit with her and we are hoping she will come to Maine one of these days so we can share our little corner of the world with her!