Friday, February 26, 2010:  Woke to another beautiful Arizona morning.  Overnight temperatures were warmer, in the 50’s, than the two previous nights.  Opened the door and let the sunshine and warmth from the sun chase out the coolness inside the trailer.

Kit is feeling a bit better this morning but still a little run down.  I think her cold and cough is improving…..she certainly looks like she is feeling better.

Kit wanted to take it slow before getting on the road so Dewey and I walked into town and had breakfast at the Tortilla Flat Saloon. 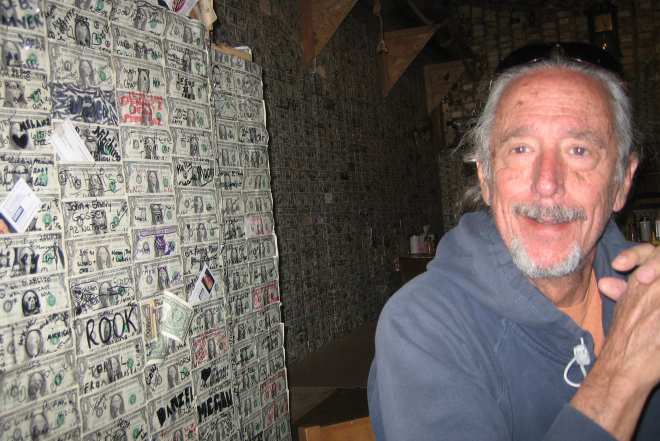 We did notice that the “dollar bill wallpaper” was a bit rough down at floor level and there appeared to be some spots where the dollar bills had “fallen” off and others where the bills were stapled one atop another.  In addition there were a number of foreign currency bills in the collection.

We broke camp and were on the road by noon.  Traveling down through the canyon we stopped at the Lost Dutchman State Campground to poke around.  It was nice but we all thought Tortilla Campground was much nicer…..and a much better deal.

Kit and I stopped in the first large town we came to, Apache Junction, in order to get some fuel and more meds for Kit.  We then hopped on US-60 and US-795 through Florence, Oracle Junction and on into Tucson.

If you’re wondering about Mister Bill, yep he is on this year’s trip with us as well.  Anytime something funny happens I can always blame Mister Bill.  You know…..like: “Mister Bill must have stepped on a frog”…..stuff like that.  In addition he is very flexible and is content to ride along in his favorite spot atop the dash.  Except when the sun shines through…..then Mister Hand has to hide him in the Kleenex box.  Oh, the indignity of being made of clay.

And that green plastic thingie hanging from the mirror…..it’s an Arizona Ice Scraper.

Friday afternoon, February 26, 2010 to Tuesday morning, March 9, 2010—-Tucson, Arizona:  Arrived at the very accommodating “Doobie Resort” for our second visit this trip and was warmly greeted by the Lodge Masters:  Sam, Nile and Max.  If you really want to feel important in life…..keep a couple of dogs around.

We had originally intended to make one stop in Tucson this trip but since my mom had suffered another stroke we decided to head back here and spend some more time with her.  In addition we wanted to give my bruzzin Dewey and sisterzzin-in-law Bea and other brother Dan some reprieve from taking care of mom’s daily needs.

Speaking of mom, she is doing much better.  Her time at the Skilled Nursing Facility, Handmakers, has improved her speech and motor skills to about 80% of pre-stroke levels.

She always has a smile on her face and that famous twinkle in her eye whenever we walked into her room.  We made it a point to stop in frequently to spend some time with her.

We spent most of the eleven days in Tucson doing the following:

We did take a couple days to goof off however.  On one adventure we loaded up the kayaks and headed for Patagonia Lake which is down near Nogalas, Arizona just north of the Mexican border.

Kit joined us and as you can see she has pretty much recovered from her illness.  Come to find out she actually had bronchitis and after a few days on an antibiotic she was as good as new.

Paddling up into the far reaches of the lake we felt as we were in a wilderness area.  Dewey turned to me and said…..

…..do you hear banjo music?   Nooooo, I said…..but I do detect the faint sound of Mariachi Music and someone whispering “Squeal like a Javelina”.  We wisely decided to turn around and head back to civilization.

After lunch we spent some more time on the water and really enjoyed exploring Patagonia Lake and its tributaries. 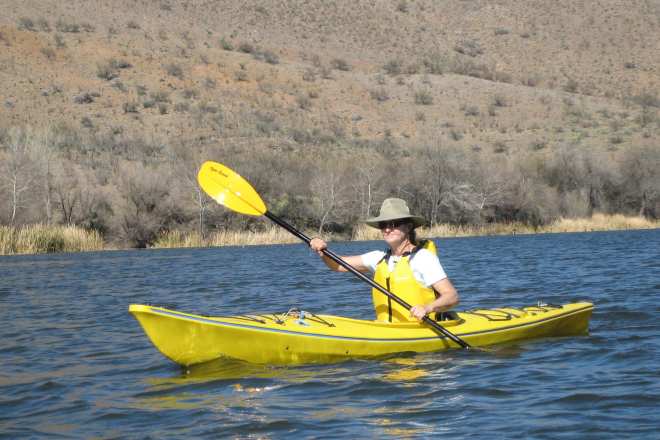 We observed plenty of birds and spooked this fellow as we came around a bend. 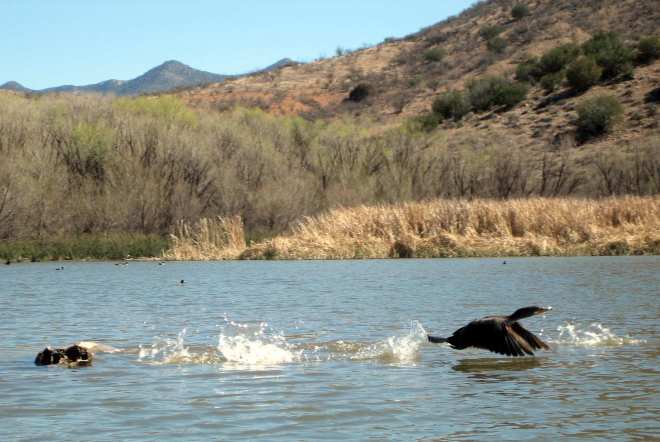 A great day on a really nice lake with great friends!

Kit’s Corner:  We thoroughly enjoyed our second stop in Tucson.  We were able to spend more time with Nana and Bill tended to quite a bit of family business that needed to be done.  Had a great time at Patagonia Lake, although I skipped the kayak part and took the time to walk around the campground area and explore.  Who knew they had such a nice park way out in the desert!