“Travel is more than the seeing of sights; it is a change that goes on, deep and permanent, in the ideas of living.”

Sunday, February 13, 2011 through Wednesday, February 23, 2011–Doobie RV Resort, Tucson, Arizona:  This incredible city is our winter hometown.  Not only does my mom live here, but my bruzzin Dewey, bruzzin-in-law Bea and my other-brother Dan.

For the past four years, Mom has lived in a very nice assisted living facility in the northern part of town. 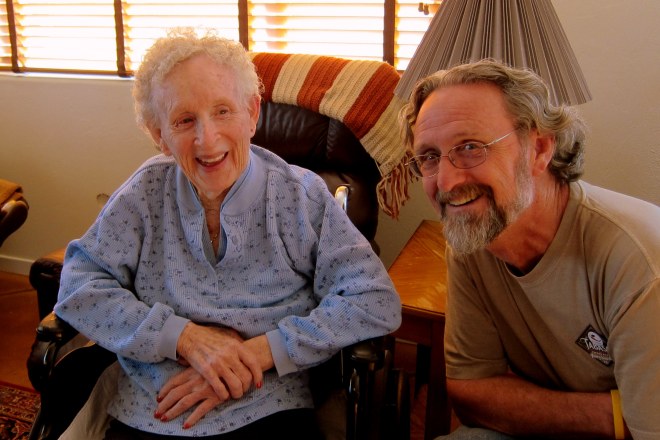 Mom was always the consummate party girl and advancing age hasn’t diminished that.  It is fun to hear of her tales as a member of the military during World War II and of my early childhood antics while growing up in Hawaii and San Diego.

Mom’s place, Crossroads Adult Care Home, is a nice intimate facility situated on beautifully landscaped grounds with incredible views of the surrounding mountains.  I will direct your attention to the website only so you can see a picture of my mom featured on the cover of their brochure. http://www.crossroadsadultcare.com/.  After 86 years she has finally attained her 15 minutes of fame.

My bruzzin, Dewey retired to the Tucson area after a successful career in the telecommunication field.  He served in the Navy onboard submarines and is now a certified Desert Rat. 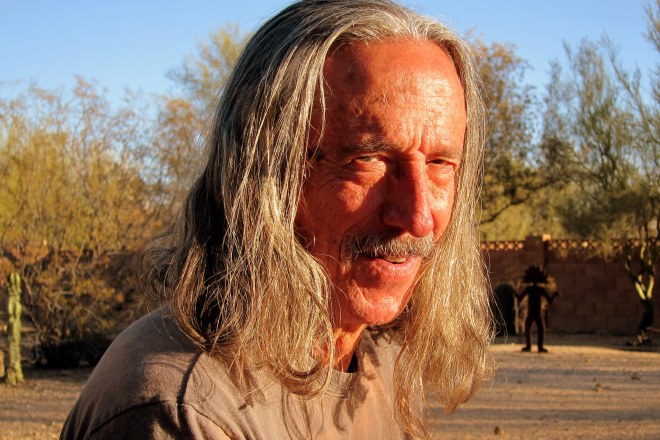 My other-brother, Dan works hard as a chef at the El Conquistador Resort. 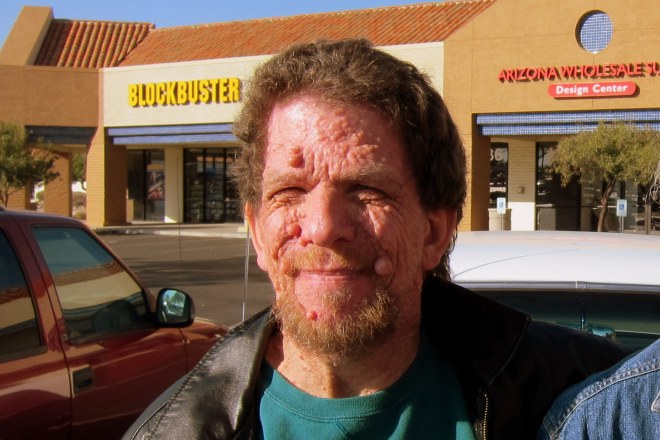 And last, but not least, my bruzzin-in-law Bea is an RN and a recent retiree from Northwest Medical Center. 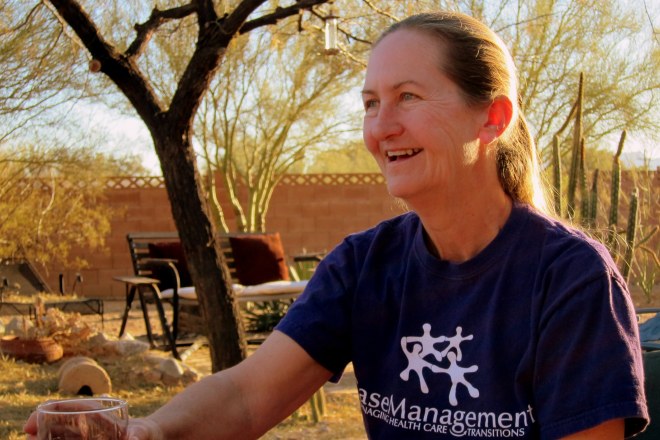 These four folks are why Kit and I return to Tucson year after year.  Of course the great weather doesn’t hurt.

There are three other very entertaining residents at The Doobie RV Resort as well.  They are so active I had to wait for afternoon siesta time to snap their photos.

Sammy is the Alpha Female and keeps the other two juvenile delinquents in check.

Nile, the lanky teenager, has an innate and highly developed ability in the field of Counter Intelligence.  If it’s edible, and on the counter, it is his! 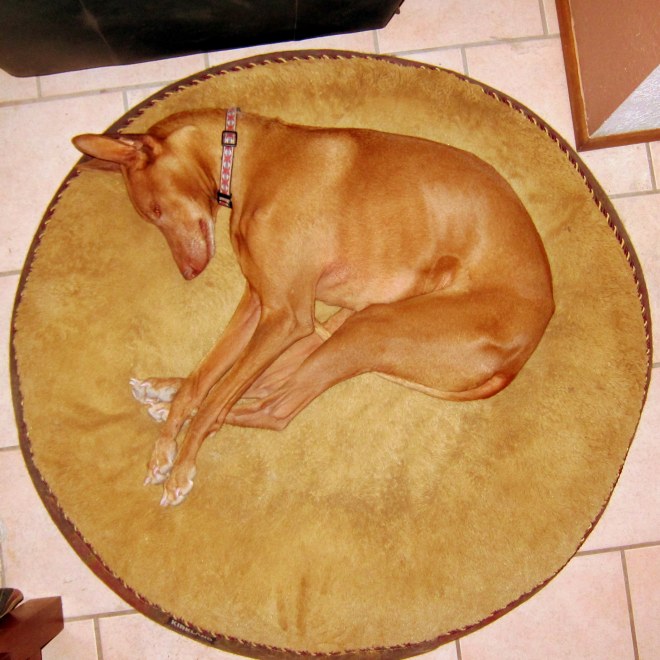 And then there is Max, the kid of the bunch whose main role is to aggravate his siblings. 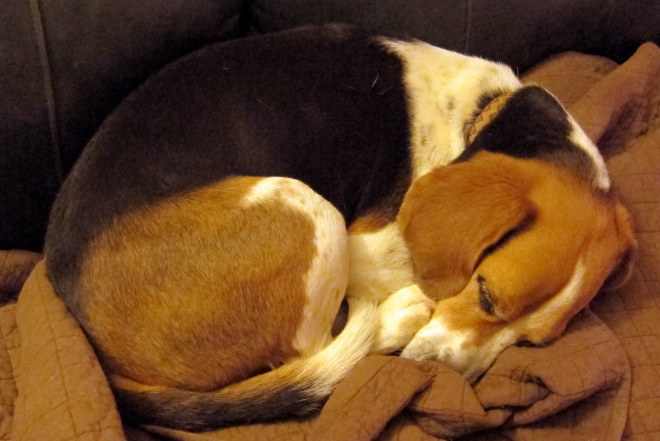 While here we enjoyed all our favorite Mexican fare at all of our favorite local places.  Our dining experiences ran the gamut from street venders to four star restaurants.  There are very few places north of the border that can equal Tucson for Mexican cuisine.

For a change of pace, Saturday night we did it up right when Dew and Bea took us to their favorite flamingo restaurant.  Now I have never tasted flamingo but I was betting that it tasted a lot like chicken…..with less meat on the skinny leg bones.

Well, I misunderstood…..this place was a Flamenco Restaurant, complete with live music and pretty dancing girls. 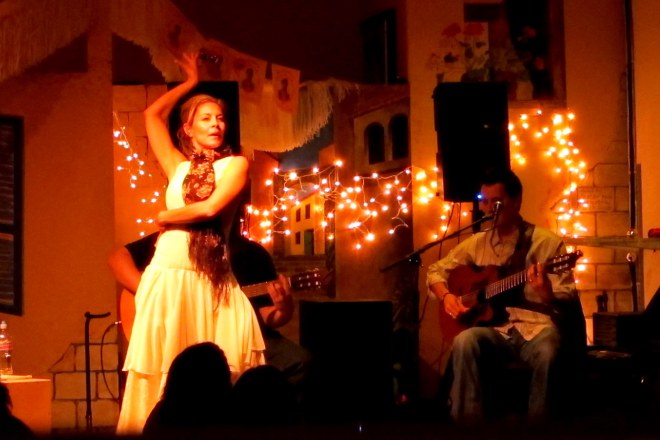 We had a great time eating, drinking and being Mary…..or is that spelled merry? 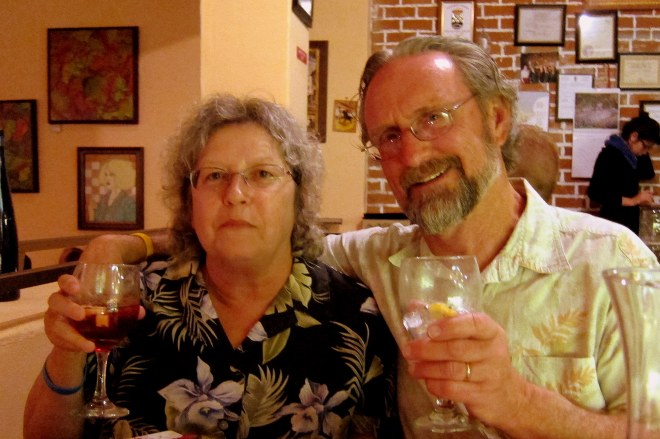 Dewey and Bea were so excited at sharing this place with us that they were beside themselves with joy! 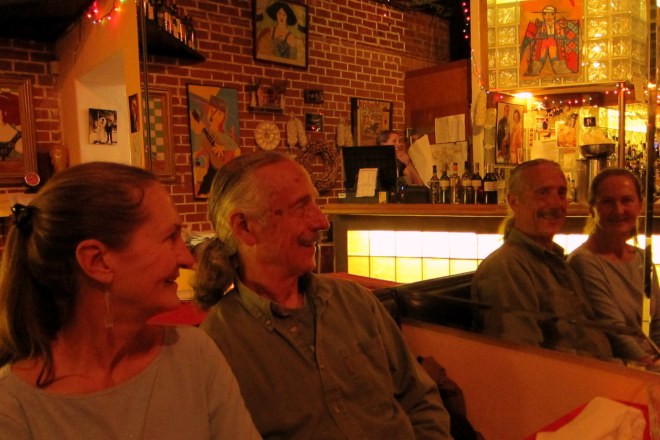 There was no roasted flamingo on the menu but we enjoyed a variety of eight different tapas ranging from squid to smelt.  First time I ever ate bait for dinner……well, at least sober.

In addition we enjoyed some team cooking at home.  Dewey and Bea put on a huge Sunday Brunch and invited many of their friends and neighbors in. 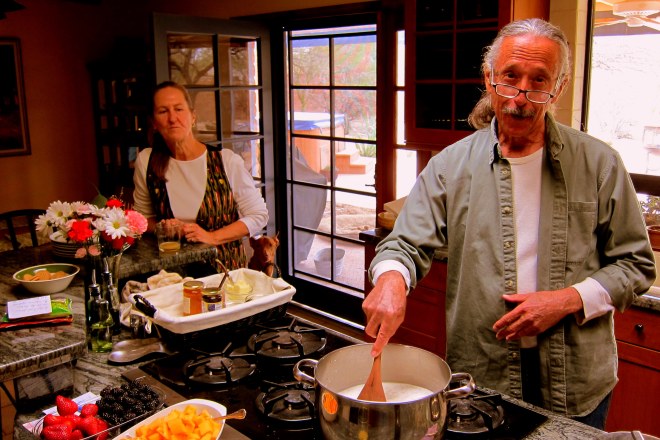 And I served as the bartender where I learned to make Margaritas with a splash of orange juice.  Who knew…..a healthier Margarita!

Kit and I, as most of America, were moved by the senseless tragedy in Tucson last month.  We made time to visit the Safeway that was the location of the terrible incident.  Inside the store, there was a huge yellow banner containing thousands of kind words and healing messages from the local citizens.  At the entrance, on this particular day, right at the scene of the tragedy, there was a table set up with a couple of enthusiastic Girl Scouts selling cookies.  Life does indeed go on.

We then made a pilgrimage to Gabby Giffords office downtown. 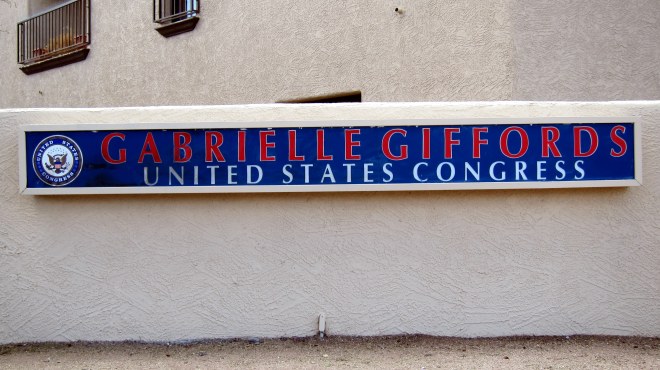 The office manager greeted us warmly, asked us to sign the guest book, and directed us to a small store where blue bracelets were being sold as a fundraiser for Gabby’s slain aide, Gabe Zimmerman. 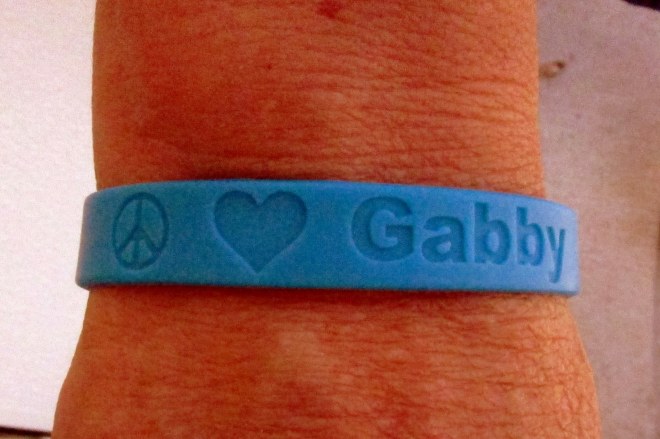 While we were visiting Tucson our cell phone plan expired so off to the Verizon store we went.  Kit and I traded our reasonably intelligent phones in on two new smart phones.  Now, I’m not sure I like my appliances to be smarter than I am but I felt obligated to keep up with the times.  Now I can instantly view all the intellectual material on You Tube and forward all those e-mails that promise I’ll get something of value in 48 hours.

We also made our obligatory stops at Trader Joes, Rubio’s and The Summit Hut.  We also shopped at Savers where I picked up even more Hawaiian shirts…..after all I have to be true to my people and their heritage by sporting their native dress.  I just wish I had the legs for wearing them.

We have been carrying on an e-mail friendship with a fellow RV’ing couple for the past few months.  Chuck and Lea Rae are from Minnesota and connected up with us through our website.  We finally where in the same part of the country at the same time and took the opportunity to meet in person. 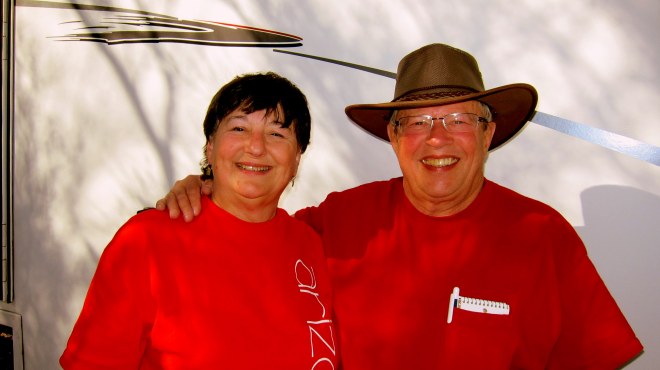 Kit and I had a great time getting to know this delightful couple and sharing our personal histories.  They are traveling in an Artic Fox trailer a bit larger than ours so we had a lot of trailer and RV talk to get through.  We invited them to visit us in Maine this summer and hope they take us up on the opportunity.

Chuck and Lea Rae were camping at a State Park in the Tucson Mountains.  As we made our way back toward town the waning day provided outstanding light to photograph this beautiful area. 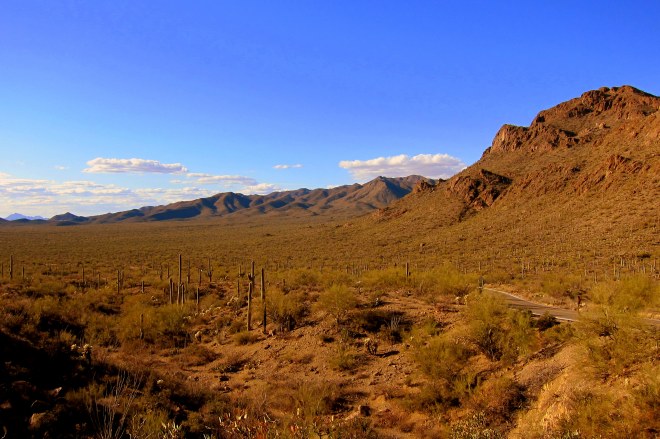 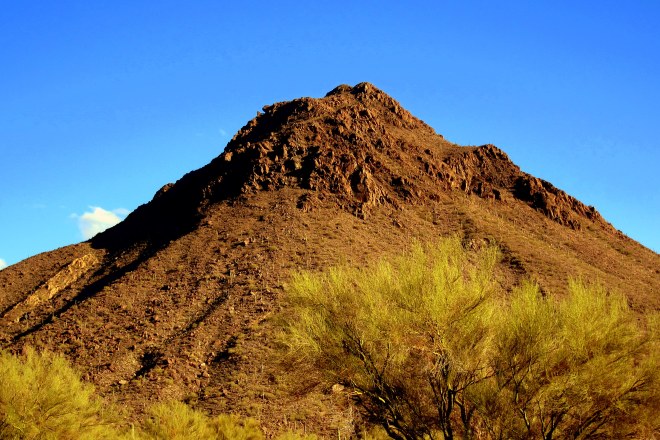 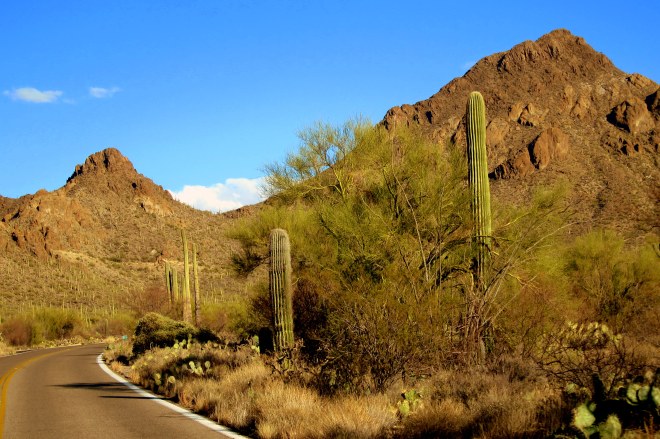 Since it was time for the trucks oil change and since we were in Tucson, I took her to my favorite dealership, Watson’s Chevrolet.  After a few minutes, the service manager came out and informed me that transmission oil was leaking from the front seal.  I didn’t even know they used seal’s in modern engines…..hope the ASPCA doesn’t find out about this.  Anyway, the only way to fix it would to leave the truck overnight as they had to drop the transmission.  That’s the bad news.  The good news is that the repair was covered under warranty.  Then more good news followed…..GM had authorized a rental car for us to use.  So we drove around in a 2010 Malibu for the next day and a half.  Gotta love the new focus on customer satisfaction that the American car manufactures have adopted!

Dewey and I decided it would be fun to get a couple of slingshots and shoot at the nice iron garden silhouettes that Bea so carefully placed around her beautifully landscaped back yard.  There was no shortage of ammo as appropriate sized and shaped stones were in abundance.  We kind of kept score by counting the satisfying “plink” that rewarded the successful shooter. 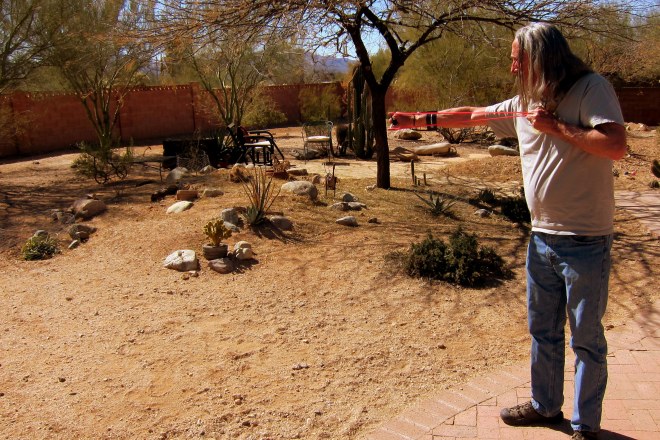 By unanimous decision Dead Eye Dewey was crowned the champion by Bea…..the lump on his head should go away in a few days.

Most evenings we sat around in the back yard, enjoying a few cocktails, and marveling at the star lit sky.  On a few occasions, when the temperature dropped into the 60’s, a campfire was prepared.  One of us four is a closet pyromaniac. 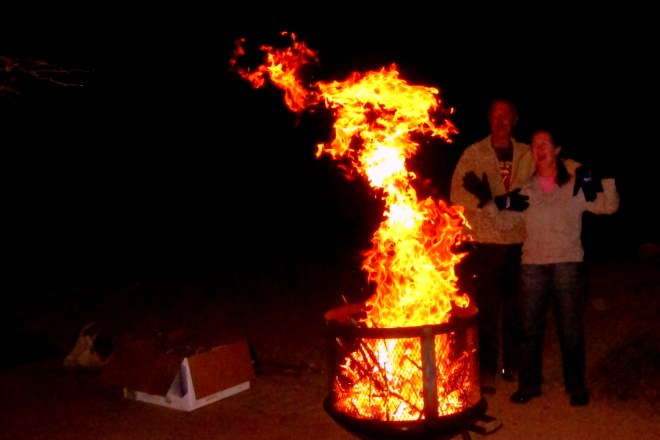 My bruzzin Dewey has a 1955 Chevrolet that was originally his father’s (my uncle/stepfather/uncle).  Dewey the elder loved 55 Chevy’s and had a number of them at any one time…..only a few of which were road worthy and the rest being “parts cars”.  Well Dewey senior passed this particular 55 on to Dan (my other-brother) who then passed it on to my bruzzin, Dewey junior. (Anybody else confused…..my family tree resembles a telephone pole.)  Anyway Dewey Junior restored the car to original condition some years ago.  However with the original 235 CID six cylinder and 2 speed powerglide transmission it wasn’t the peppiest or most reliable car on the road.  So last year he contracted with a local mechanic to drop a 350 CID crate motor in the thing and add power steering, power disc brakes and an air conditioner.  We were lucky enough to be in town when the finished 55 Chevy was delivered. 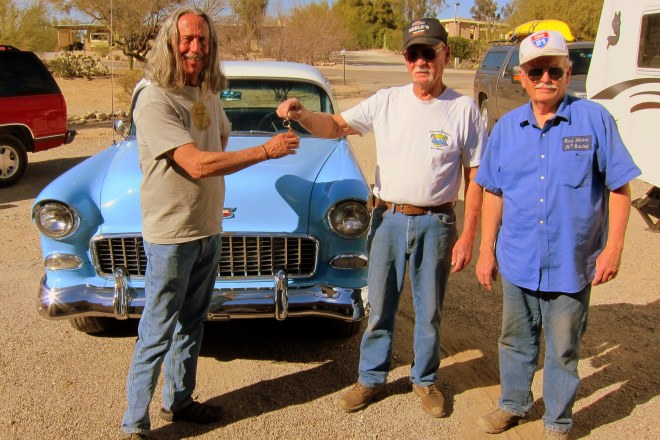 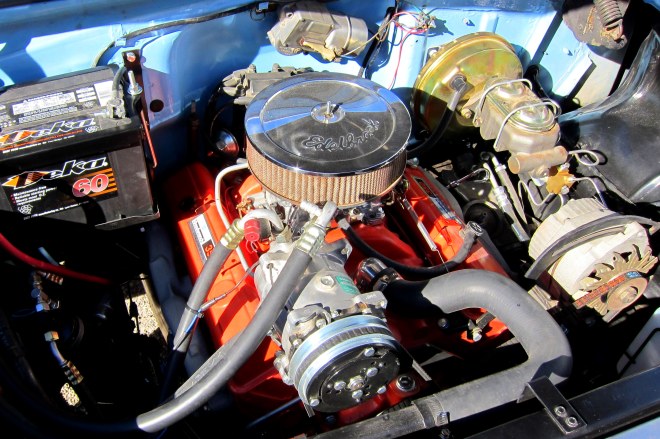 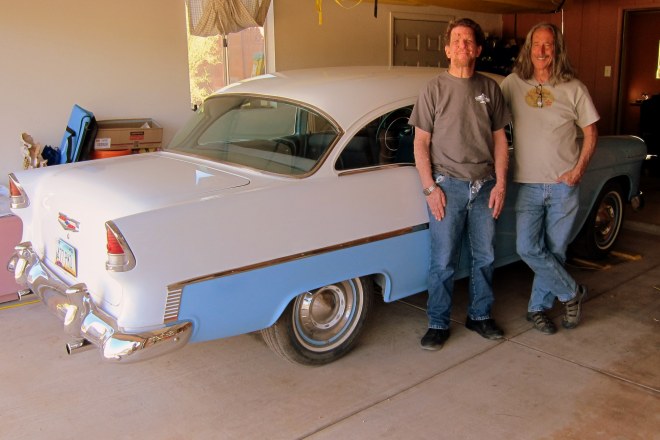 So obviously the newly rebuilt 55 Chevy became the vehicle of choice for all our remaining outings.  We took it to a local Mexican joint where I had the best Carne Asada of my life then as we were leaving the restaurant we enjoyed this sunset through the tinted windows. 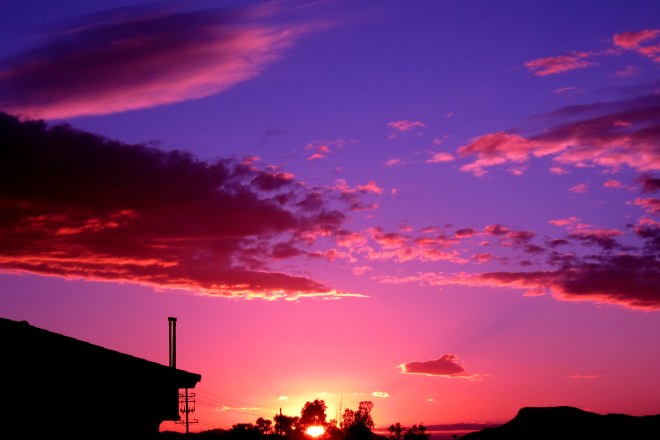 As Bea snuggled next to Dew and Kit and I sat side by side in the large back seat we felt like teenagers on a double date.  I politely asked Dew to take the long way home and to keep his eyes straight ahead.  Just like back in the good old days of the early 1960’s it didn’t do me any good.

Kit’s Three Cents Worth:  While in Tucson, I had an opportunity to meet my friend Sandy for lunch. 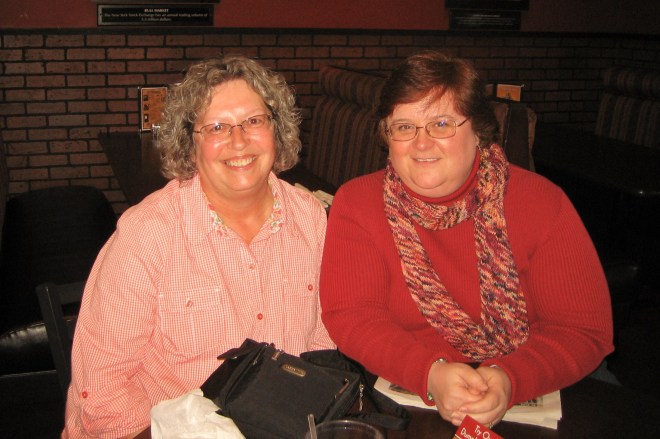 She is the daughter of my good friend Pat, in Maine; well, she’s in Florida now – keeping herself very busy in her new neighborhood.  Anyway, Sandy and I had a great time catching up on lots of things.  She loves Tucson and the beautiful weather here, doesn’t seem to miss the snow (and ice) in New England at all.