Saturday, March 12 through Monday, March 14, 2011—San Onofre, California (Part Two):  On the next to last morning we woke to another perfect California day.  The sun had not yet peaked over the hills behind us, the surf was glassy smooth and the wind was still.  It would have been a great day to paddle out and ride a few classic left breaks.  But alas…..no board, I did consider doing some bodysurfing but this morning water temperature was listed as 56 degrees!

I’m going to have to get a wet suit before we visit this area again!  And maybe rent a surfboard for the week.

After breakfast we enjoyed a nice long stroll down the beach. 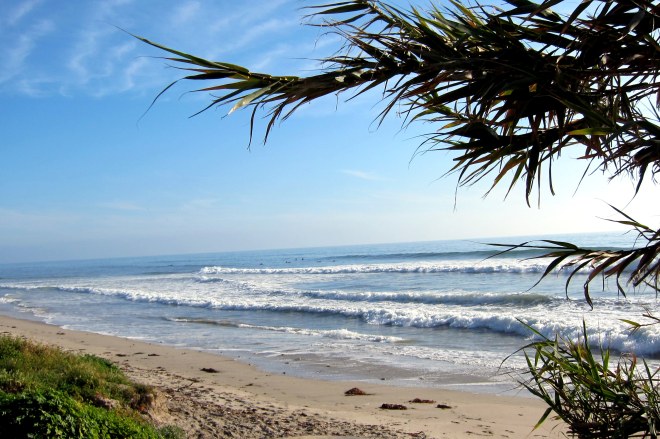 Soon we came to the San Onofre Nuclear Generating Station.  Yep…..that is its official name and the acronym is indeed “SONGS”.  Honest…..Google it! 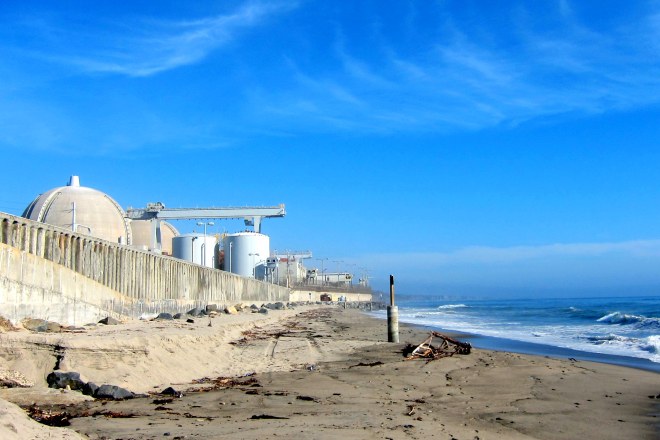 As I viewed the reactor containment building I thought of the classic movie line uttered by Detective Lt. Frank Drebin:  “Everywhere I look something reminds me of her”.

Feeding amongst the reactor cooling water discharge pipes where many interesting birds such as this Raven.

And a little fellow with an impressively long pecker.  Which he was using to dig up his dinner by poking it around in the sand.

A short walk south of the Nuke plant one comes to the “swimsuit optional” area.  I decided to leave that adventure for another day.  Besides my shorts and t-shirt was fairly presentable, however my swimsuit optional attire was horribly wrinkled.

That afternoon, after the sea breeze kicked up, I took my kite down the beach and got in about two hours of good flying.  There is nothing like a steady ocean breeze for kite flying.  I was so intent in practicing some new tricks that I failed to realize I was attracting a crowd.  It was at that moment my kite decided to play dive bomber and torpedoed into the surf.  Acting like I meant to do that I quickly dragged the soggy nylon kite up onto dry land and carried the whole mess, and what was left of my dignity, back to the campsite.

We spent the final evening, siting in the sand and watching the brilliant California sun set over the ocean.  The end of another great day in Retireeville!

Tuesday, March 15, 2011:  Well today we reluctantly leave this beautiful place…..check out time is 1200 and it is now 1201.  We waited until the final moment in order to eke out a few more hours of camping on the ocean shore.  We have decided to come here again and spend even more time.  The only disadvantage is that the best sites have no sewer hookup…..too close to the ocean.  However we have already learned that we can go 7 days before our tanks need emptying, so next year…..7 days it is!

Traveling north on I-5 we soon reached US-91 which we used to reach Riverside National Cemetery, the final resting place of two great people…..Kit’s mom and dad. 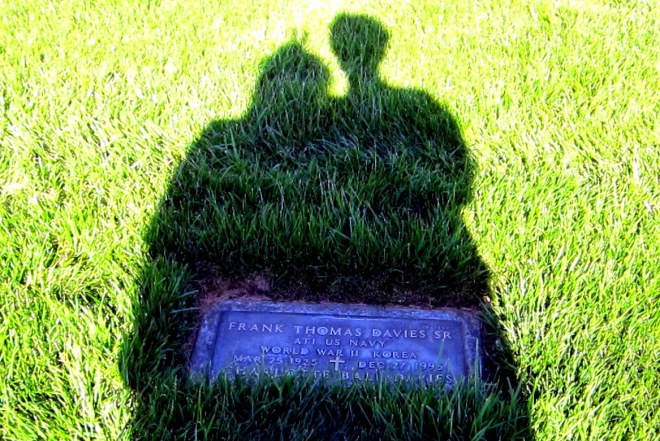 Um….. Just for the record, I wasn’t making “shadow rabbit ears” on Kit’s head during such a somber moment.  There must have been a tree in the background that cast its shadow that way.  However if I had, I bet Frank would have thought it was hilarious!

After paying our respects we motored across the road to March Field, an Air Reserve Base.  They were full so we stayed in the overflow area which was located in a nice grassy area. 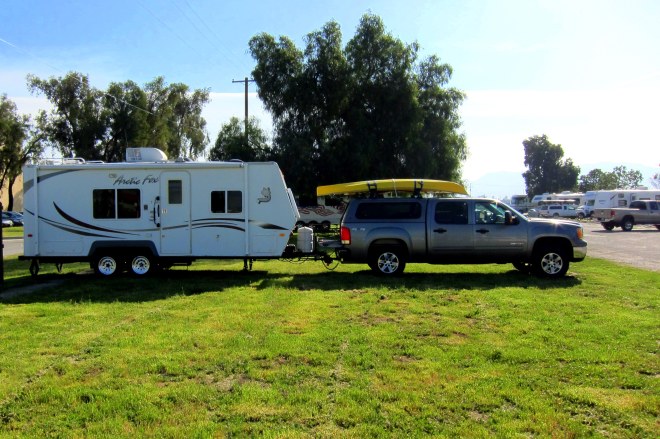 Riverside is in Orange County and true to its name there are fully ripe trees in the miles upon miles of orange groves that border each side of the roadway.

We stopped at a farm stand and made off with bags of oranges and tangelo’s which we are able to enjoy for many days to come. 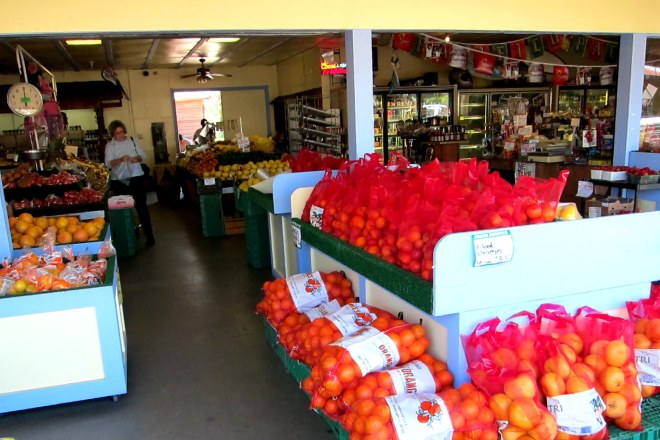 There were women in the back of the shop cutting oranges to be processed into juice.  They are known as the Orange County Choppers and now have a reality show on the color TV.

We rode US-215 through San Bernardino and up into the mountains.  The air in the LA Basin was smoggy and dingy looking.  However as soon as we topped out we looked east into clear air.  These mountains really do trap the pollution from being cleared out by the ocean breezes.

Driving through Hesperia, California under sunny blue skies we experienced an air temperature of 63 degrees.  We soon dropped down into the Mojave Desert where the temperature rose to 86 degrees.  A 23 degree rise in temperature in less than 30 minutes!

We decided to stop at the Barstow Wal*Mart for fuel, groceries and some walking around time.  Our next stop is going to be Mojave National Preserve which is in the middle of nowhere!  There are signs everywhere to resupply here or perish in the desert!

The road into the preserve is long, lonely and desolate.  There were some interesting cloud formations that added to the eeriness of the scenery.

Arriving at the sparsely populated Hole in the Wall Campground we had our choice of sites. 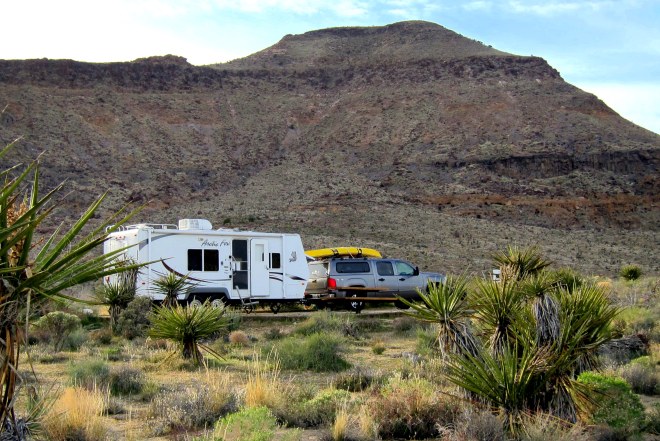 We chose one that would be private and afford nice views of the desert and surrounding mountains.

And a rather unusual sunset.

Mojave National Preserve is located between Joshua Tree National Park and Death Valley National Park and due to this location is sparsely visited by most folks.  What a shame, as this place has an abundance of unique features that merit a visit.  Its remoteness allows for more of a wilderness experience and its vastness provides a very diverse environment.

After dinner, we fell asleep listening to the stillness of the desert night punctuated by the howling of coyotes on the prowl.

Thursday, March 17, 2011:  Up early to crystal clear skies and temperatures in the mid 60’s.  After breakfast Kit enjoyed some quiet Kindle reading time and told me to go away and play.

So while Kit was enjoying some peace and quiet, I took off to do some hiking.  I chose the Rings Loop trail because the trail descends into Banshee Canyon and affords close examination of the “hole in the wall” geology that this area is famous for.

These rocks were formed by volcanic activity as many other southwestern landscapes were.  However these formations are not the result of cooled magma but rather are a product of volcanic ash clouds that settled and compressed into a solid mass.  The “holes” were formed by trapped gases creating pockets of various sizes.  Many years later, due to the action of wind and water erosion, the gas pockets were exposed to daylight and the unique holes were created. 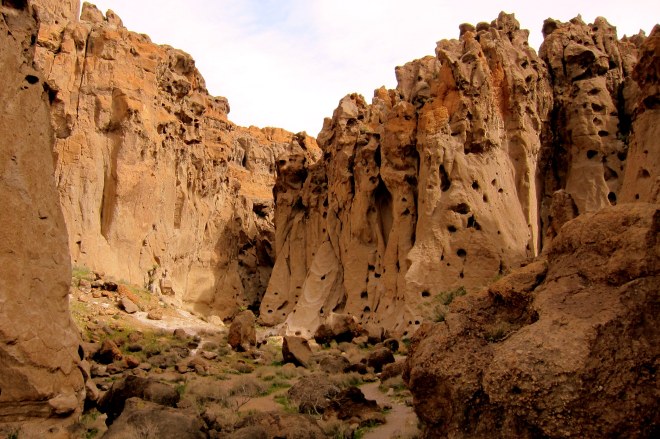 It must be my weird imagination, but I kept visualizing faces and creatures in the rocks, such as this “Idol”.

And this funny nightcap wearing character.

The trail soon narrowed into a tiny “slot canyon”. 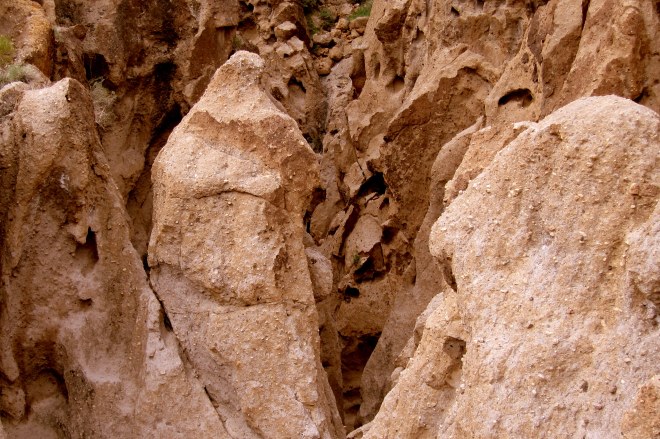 In order to make it a true loop trail the National Park Service installed iron rings into the rock wall to allow hikers to continue on. 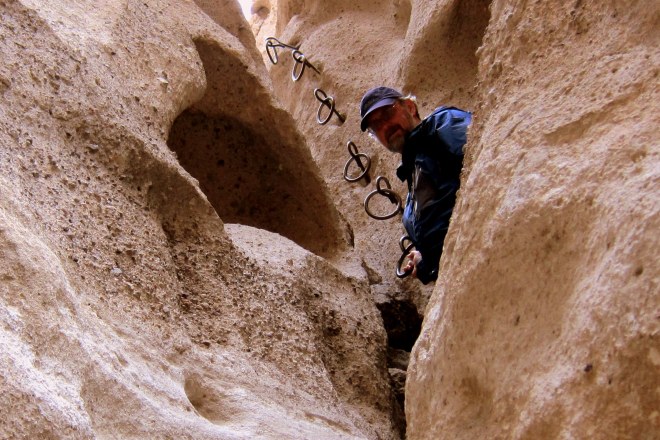 On top the trail terminated at the visitors center where there was a short nature walk back to the campground.  Along this trail I discovered the very rare Paper Bag Bush. 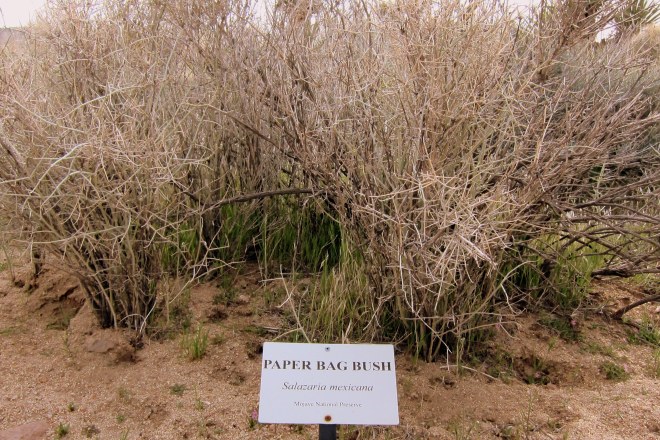 This folks is one of the few remaining productive sources of paper bags.  Now you know why the grocer encourages you to bring your reusable bags on the weekly shopping trip.

We decided to head out mid-day toward Las Vegas and a long anticipated visit with our daughter Suzie and her family.  We choose to travel on one of the many dirt roads that provide access to the interior of this vast park.

The road was very picturesque and we stopped frequently to walk among the Joshua Trees.  These unique trees remind me of something that would have been created by the famous San Diego writer and illustrator, Theodore Geisel. 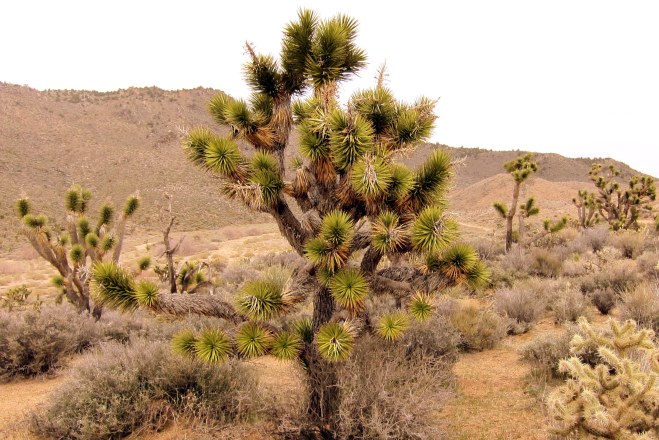 The road was a bit rough so when we finally reached pavement we pulled over for a break and to grab some lunch.  Opening the camper door we were confronted by this scene.

First time that’s happened…..I guess that road was rougher than it felt.  After straightening up we moved onto I-17 and headed east.  In a little over an hour we pulled into town.

Can’t wait to see the kids and kiddles!

Kit’s Six Cents Worth:  Loved San Onofre!  I think it’s my very favorite place to camp.  Remembering that dirt road in the Mojave, it was a rough ride.  It took us a few minutes to straighten everything out.  Fortunately, nothing was broken.  I am very much looking forward to seeing Suzie and family.  We plan to stay in Las Vegas a bit longer this time so we can spend more time with Jack & Tucker.  At ages 6 and almost 4, they are growing up so fast.  Before we know it, they will be in high school and want to spend all their time with their friends.