What lies behind us and what lies before us are tiny matters compared to what lies within us.

Friday, December 20, 2013 through Tuesday, December 31, 2013-Oasis RV Park, Las Vegas, Nevada:  It is our distinct pleasure to wish all our extended family and distended friends (hey, its holiday feasting time!) a very Merry Christmas.  Or if you’re one of the folks with a hyphenated name then, Happy Holidays.  And if you happen to be an atheist, well then we truly hope you had a great Wednesday!

We had a fantastic time at the Oasis RV Park in Las Vegas.  One of the highlights of the stay was the numerous times Jack and Tucker were able to camp out with us.

The main reason we choose to spend part of our time in this park was the close proximity to the kid’s house and the great kid-friendly amenities this park has to offer…..more on that later.

In the days leading up to Christmas there was lots to get accomplished.  First our little camper needed decorating which the boys handled with artistic gusto.

Then there was the last minute shopping for each other as well as their parents followed by the enthusiastic wrapping of gifts back in the camper.

Tucker decided to wear his bike helmet as Guma can get a bit wild with the wrapping process.

Speaking of wrapping, back at home their father had wrapped the place in LED lights making for a very festive and welcoming effect.

Then for the first time in their young lives we were able to enjoy Christmas day with Jack and Tucker and participate in the joyous chaos that is the childhood Christmas.

They were happy to see us and show off what Santa had brought.  They also knew that Guma and Poppy were toting even more gifts for them to enjoy.

Christmas dinner in the Owens household is a bit unique.  Each family member is allowed to choose one item for the feast.  So we ended up with a pretty eclectic menu consisting of:  Barbeque Beef Sandwiches, Broccoli Salad, Buffalo Wings, Raw Vegetables With Ranch Dip, Pumpkin Pie, Tostitos, Egg Rolls, Chocolate Cake, Green Beans and Mashed Sweet Potatoes.

However the hit of the meal was Suzie’s homemade Popovers!

And this from a women that used to sport a bumper sticker on her Subaru that read, “My Only Domestic Quality is That I happen to Live in a House”. 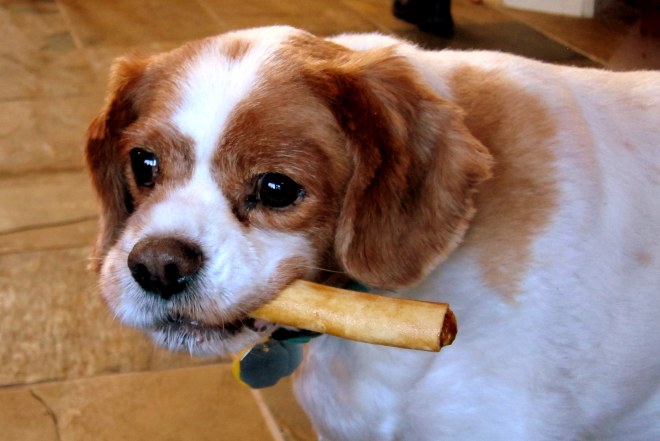 While the rest of the family gathered around the Christmas tree for round two of gift opening.

A tradition back home in Maine is for us to take the grandkids shopping for their parent’s gifts followed by a nice meal out.  We imported that tradition to Las Vegas and the kids were very excited to be on the giving end for a change…..all gifts were perfect and truly appreciated by their parents.

An additional old family tradition is for Poppy to descend into his home woodshop the months leading up to Christmas and build the grandkids a gift made of wood…..this year Jack and Tucker each received a Bosy Box.

What’s a Bosy Box?  Well its part bank with an authentic antique Post Office Door and part treasure chest with a secret compartment featuring a drawer with a hidden lock.  The Bosy Box that Jack is holding is made of Red Oak and Tuckers is made of Sapelle, a sustainable wood species from tropical Africa.  The kids seemed to enjoy receiving their Bosy Box’s and the parents were just a bit jealous that they didn’t get one as well.  So why the name Bosy?  Well, when I designed this project many years ago for another grandchild, I called it a Busy Box due to the fact that it would take the owner considerable time to decipher the secret to opening the box and locating its hidden features.  However with my terrible handwriting the “U” looked more like an “O” so busy became bosy and has been known by that name ever since.

The grandkids must have been on the Nice List as they received quite a haul from Santa.  The bulk of Jacks gifts consisted of Lego Kits…..think there were 5 or 6 in all.

And Tucker received many gifts as well, including a camera, a glow-fish tank and this ball that he insisted on wearing as a hat.

Toward evening, the boys and their father played with one of their gifts, a card game that produces hilarious outcomes and uncontrollable laughter. 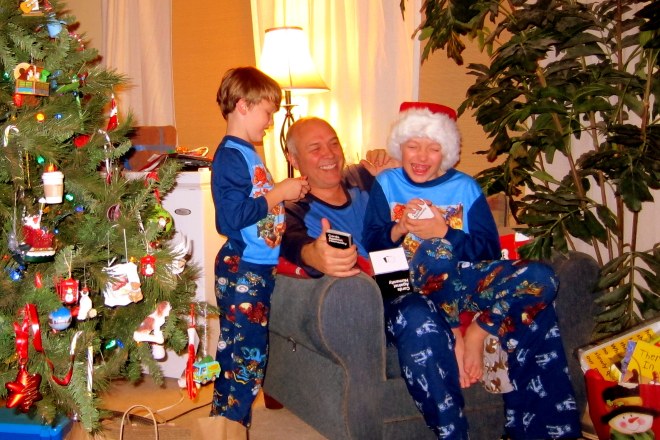 A great time was had by all…..especially Kit and I.  Thanks guys for sharing your Christmas with us this year!

The following photo is a bit cruel, but just wanted to show folks back home that winter can be warmer in other parts of the country.

So, about our home for these past eleven days…..Oasis RV Park.  Well, in addition to its convenient location this park is a full feature resort with two swimming pools (one surrounded by a sand “beach”), a mini golf course, a Jacuzzi Spa, horseshoe pits, Bocce Ball courts, a fully stocked store, a restaurant, a well-equipped exercise room, and a gaming area if your too lazy to take the free shuttle bus down to the strip to lose all your money.  All in all, a nice place…..but a bit pricey.

At 668 full hook-up sites, the place is huge and the spaces are a bit tightly packed into its 46 acre campus.

The main pool was heated and nicely landscaped with Date Palms. 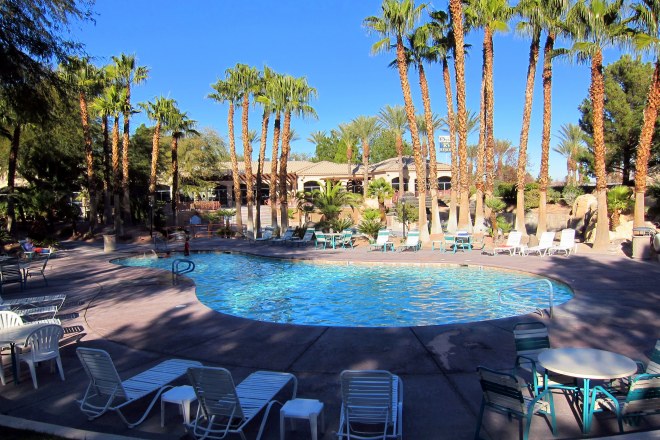 And saw daily use by Jack and Tucker, and sometimes Poppy. 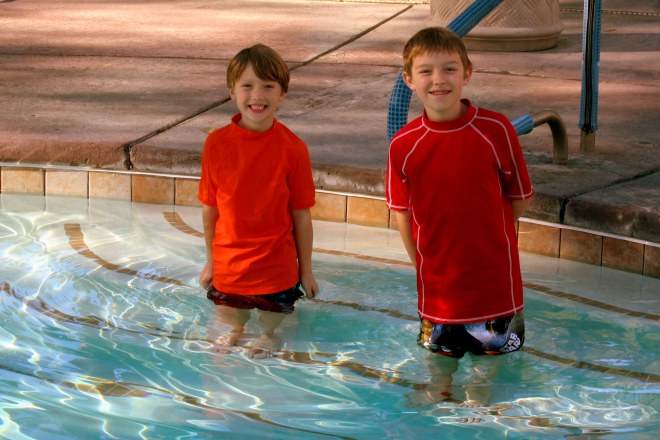 The Spa was nice and warm and served as a great place to warm up before the trek back to the camper in wet swimwear.

There were many diverse camping vehicles in the park, from small trailers like ours to huge million dollar motorhomes.  In addition there were a few dozen of these rigs, most parked in the same general vicinity. 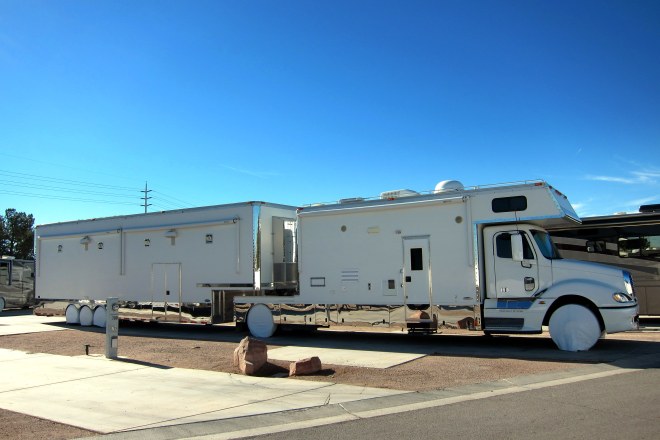 The photo does not reveal the true size of these unit…..they were ginormous!  Not sure who or what they were carrying but likely whey were commercial rigs associated with one of the many trade shows that Vegas will host throughout the year.

The park was very walkable…..however you did need to watch out for these speed demons.  See video at:   http://youtu.be/0ULxrLwfS1Q

Since it was Jack and Tucker’s Christmas vacation we were able to spend most of their days off with them.  Both are enrolled in a Science Charter School so consequently they had considerable homework to accomplish.  However, we did get to enjoy their company for a large part of their free time.

On the day after Christmas, we took them to Target and Toy’s-Backwards R-Us to spend some of their gift cards.  Outside Target we came across this interesting gentleman sporting a signboard with a peculiar request. 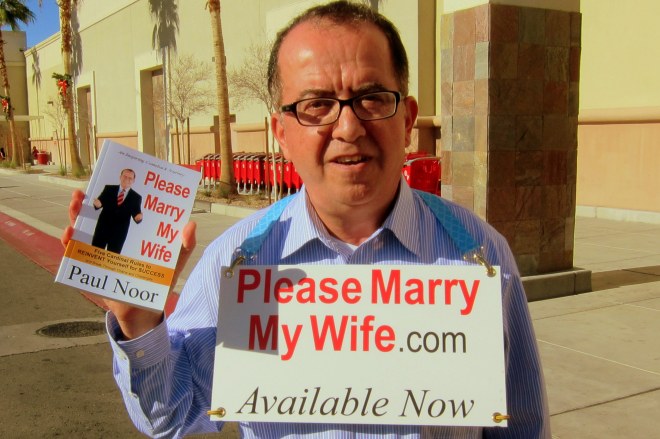 Kit called him over as I was trying to sneak a picture.  As it turns out poor Paul is a Civil Engineer and was a self-made millionaire in the construction business.  I say was, because the double whammy of a bitter divorce coupled with the downturn in the economy left him penniless.  He is now a motivational speaker and author on ways to pull out of a mental and financial depression.  An interesting guy to talk to…..and yea, he would really like you to marry his wife so he could stop paying alimony.

Another strange sight we came across while ferrying the kids here and there was this Southwestern themed home whose owners apparently ran out of money during the landscaping phase of their new construction.  So I guess they decided fake Saguaro Cactus made of telephone poles painted green would blend right into the upscale landscape of the surrounding neighborhood.

Then a few blocks away was this home with the world’s craziest backyard jungle gym.

I’m guessing the owner is a Cirque performer or works at the Circus-Circus Casino.

The kids really liked hanging out with us in our tiny camper.  The sleeping accommodations were a bit tight as the kids are really growing.  However we all made do and having their iPads help with pre-slumber quiet time, as it does most nights for Kit.

Many of the days were spent outside running around, riding scooters, visiting the store, golfing or swimming.

And breakfast was a reason for some silliness as they tried to eat their cereal with huge spoons.

An annual tradition during our visits to Las Vegas is to take the grandkids to a movie of their choice…..this year we enjoyed the Walt Disney film “Frozen”.

OK, this isn’t a dig at our frozen friends back in Maine but an animated musical based on Hans Christian Anderson’s fairy tale The Snow Queen.  The film is very well produced and contains many important life lessons embedded into its wonderful storyline.  If you have youngsters in your life, or if you’re just young at heart you must see this movie!

Out here in the west there are a chain of stores called Savers which offer gently used toys, household goods and clothing.  A portion of the profits go to various charities and it’s a great place for me to pick up Hawaiian Shirts, or as I like to refer to them “Regret Shirts”.  The kids like to come here as well and always find some interesting toys to purchase for pennies on the dollar. 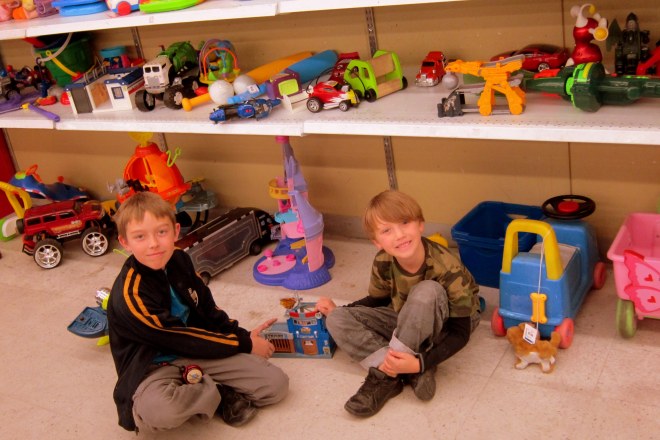 Jack and Tucker really like Asian food and the restaurant Pei Wei is one of their local favorites.  Following a delicious meal a few days ago, I opened my Fortune Cookie and found this rather prophetic message.

As mentioned, Oasis RV Park has a golf course and its rather unique being comprised of 18 interconnected putting greens.  We had a ball (pun intended) playing the course and had to make up some new golf rules…..like do-over, flub recover and roadblock.

You’ll notice I leaned the pin on a nearby tree rather than risk further humiliation by resetting it.  This portion of the course was surrounded by camping sites and our yelling and laughter brought a lot of glances our way.  Soon everyone was laughing right along with us….or maybe at us, either way we had fun.  However the rest of the game carried the threat that dawdling on the course could dampen (pun intended) an otherwise beautiful day on the links.

After the round of golf, which by the way ended in a three way tie, we jumped into the pool to cool off.

Which was followed by a relaxing soak in the Jacuzzi.

And, a nutritious lunch on the poolside patio.

New Year’s Eve in Las Vegas can be pretty crazy…..or to be more precise, crazier than normal Las Vegas.  Most of the locals shy away from the strip and celebrate quietly at home, or by dining out.  We all decided to visit one of our favorite restaurants in town, Memphis Championship Barbeque.

The platter in the middle of the table is loaded with a selection of beef, pork and chicken entrees that has won this place many awards and trophies over the years. 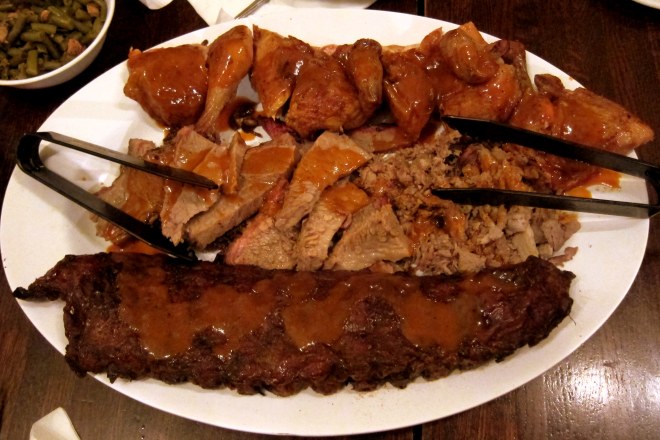 A grand and glorious time was had by all, and even though we tried our best we still carried a portion of the feast home.

Tomorrow is New Year’s Day and marks the end of our stay at Oasis RV Park.  Where to next?  Well you’ll just have to stay tuned!

Kit’s Corner:  Many thanks to Suzie and Kevin for sharing Jack and Tucker with us over the holidays this year!  Since neither of us ever had any quality time (barely knew) our grandparents, we have always strived to “make memories” with our Grand’s.  We don’t spend a ton of money on them; rather we do strange and silly things with them.  Ask the older Grand’s; they can relate a few quirky stories.  Hopefully, Jack and Tucker will remember a few strange stories of their time with us and have lots of giggles to share with their cousins someday.