Now, on this road trip, my mind seemed to un-crinkle, to breathe, to present to itself a cure for a disease it had not, until now, known it had.

Saturday, March 21 through Wednesday, March 25, 2015-Flagstaff, Arizona:  Kit and I woke to cool temperatures and bright blue skies.  This is the first morning we needed the heater…..two days ago we were using the air conditioner!  However, even with these temperatures the Plum Trees were in bloom!

Fort Tuthill is a partial hookup campground providing only water and electric…..since the overnight temperatures are still below freezing water isn’t available.  Actually, the campground technically isn’t even open for the season yet.  However they allow folks that wander in to stay for a reduced rate…..$15.00 per night for electricity only.  Not a problem for us but apparently for other folks because during our five day stay we had a few nights where we were the only campers!

Our stay in Flagstaff is dictated by two factors; one is that we really like the area and the campground.  And second, we scored a few nights in Grand Canyon National Park at Mather Campground for later in the week…..difficult to come by!  So if we needed to delay our trip anyway, this is a great place to do it!

Fort Tuthill is a military recreation facility managed by Luke Air Force Base down in Phoenix.  One of many such campgrounds spread about the US, recreation facilities are in areas that feature an abundance of natural beauty and recreation opportunities…..think of state parks for military families to relax and unwind. 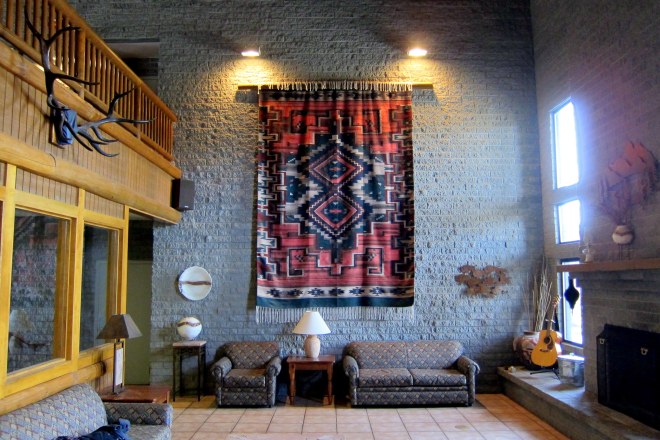 And a number of cabins scattered about the wooded grounds. 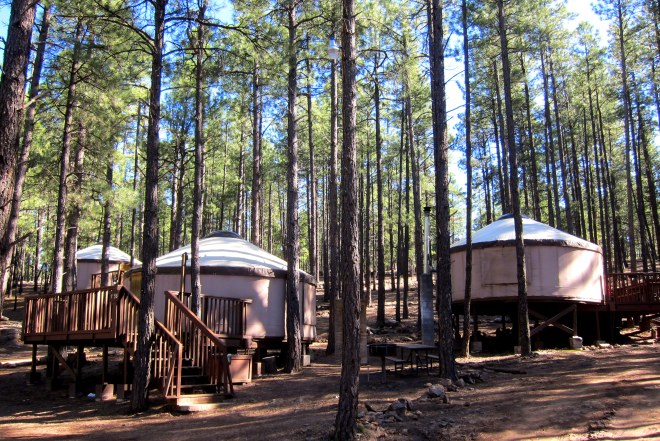 Kit and I have seen these round tents in campgrounds previously and have often thought it would be fun to experience staying in one……maybe someday we will! 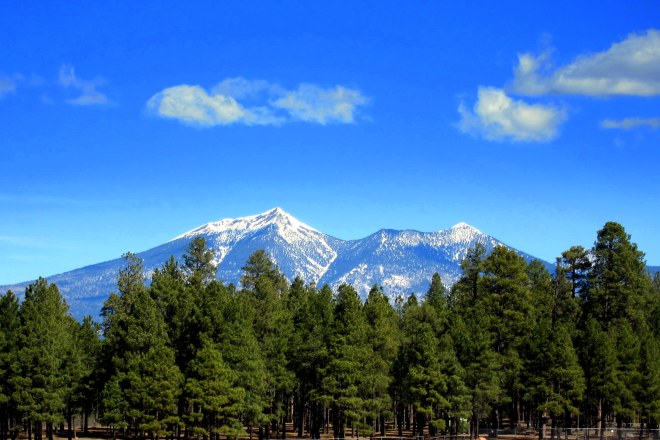 At 12,633 feet above sea level, Humphries is the tallest mountain peak in the state of Arizona and the home of the Arizona Snowbowl.  On one of the days during our stay, Kit and I drove into the Kachina Peaks Wilderness and up the flank of Humphries Peak. 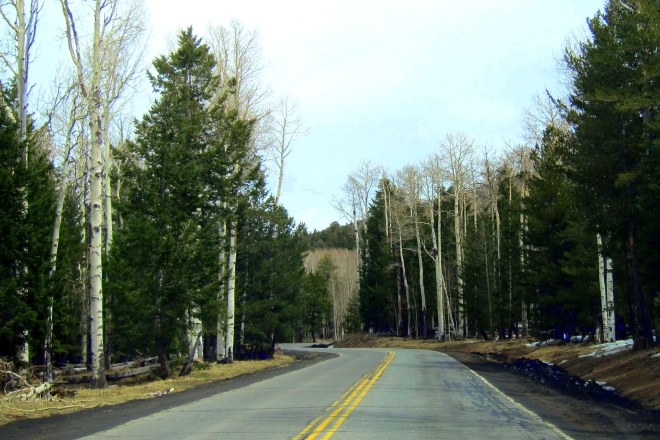 At 9,200 feet in elevation, this Alpine ski resort receives up to 300 inches of snow a season.

It features 32 runs serviced by 5 lifts…..the longest carries the intrepid skier to 11,500 feet for a 2,300 foot vertical descent on groomed packed powder.  The day we visited, was near the end of the season and there was little activity on the trails.

After wandering about the lodge and grounds, we decided to head back down the mountain in search of a nice picnic spot.  On these day long adventures, Kit has been packing a nice and healthy lunch.  Not only does it save a few bucks over eating out, but we tend to eat a lot better when we prepare our own food.  About half down the mountain I noticed an intriguing dirt road off the main highway. 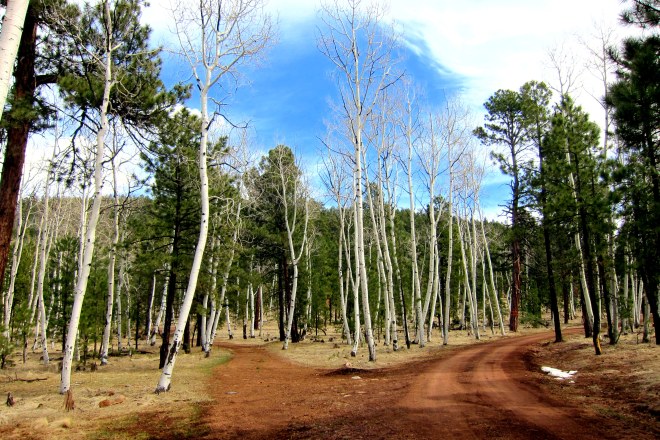 The temperatures were moderate, the sky crystal clear and the scent of pine was in the air….a perfect spot for our tailgate picnic.

Following a delicious meal, I took a walk about the area and spotted something out of place in the woods.

The sled looked undamaged and complete sitting in the middle of what was likely a major snowmobile trail.  Maybe the rider ran out of gas or became disabled in some way.  Gonna be a chore recovering the thing this time of the year!

After a great day in the mountains, Kit and I returned to our camper where she made some incredible Broccoli and Cheddar soup!

Served with fresh bread and a few Barley Pops! 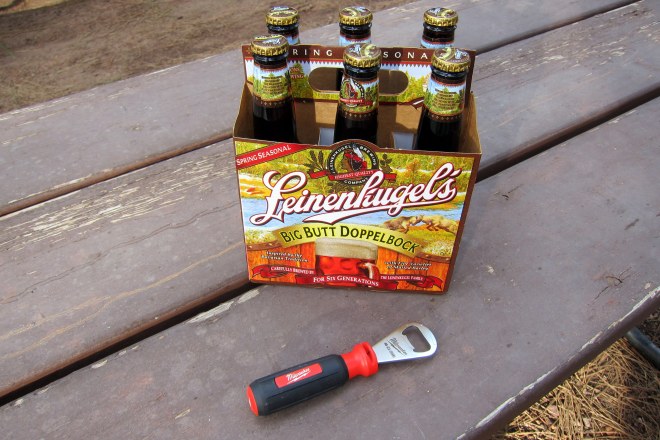 A great meal to end a great day!

Fort Tuthill is within the 1.8 million acre Coconino National Forest.  At 6,900 feet of elevation the area is cool during a significant portion of the year.  During our stay the daytime temperatures averaged in the 50’s and overnight lows dropped into the 20’s.  A refreshing change to the heat experienced in the lower elevations of Arizona.

The surrounding forest features some of the best hiking and biking trail systems we have experienced in this state. 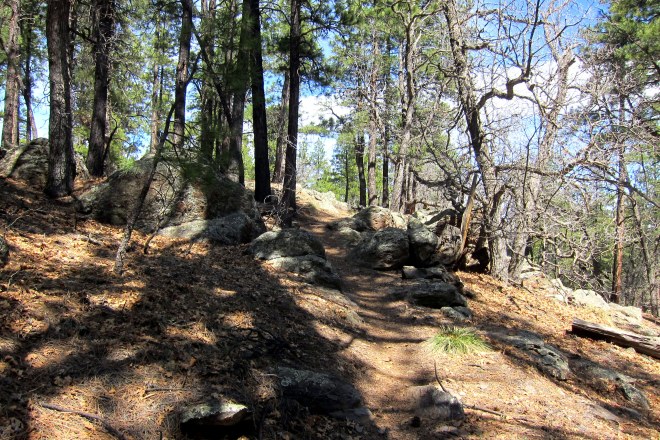 On one gorgeous day, Kit and I enjoyed a nice five mile stroll through the Ponderosa Pine, Oak, Aspen and Juniper trees that make up the Coconino National Forest.

Scattered about the forest are large granite boulders, many split open by the forces of hydraulic fracturing.

A number of these rocks were affected by patches of scaly blue-green growth…..perhaps from that fracking process we’ve all been warned about!  Not sure, but as an environmentalist I’m not lichen it!

Another activity that is popular in these woods is Geocaching.  Within a few miles of the campground there are no less than twenty geocaches!  Using my iPhone with the Geocaching App, I spent many an hour in pursuit of some cleverly hidden caches.  Note the phone is plugged into an external power supply…..no getting lost in the woods today!

Usually, I walked.  But, on occasion, the cache was hidden very near one of the many multi-use trails that spider-web the surrounding hillsides……so for those searches, I would take the bike.

This cache nearly stumped me (pun intended) as it was hidden deep in an old stump…..hard to find and difficult to retrieve!

Another geocache I located was titled “Fort Tuthill’s Fallen Soldier”.  Here I placed a Travel Bug that I had retrieved a few months ago from a cache in Maine, which is shown to the right in the photo below. 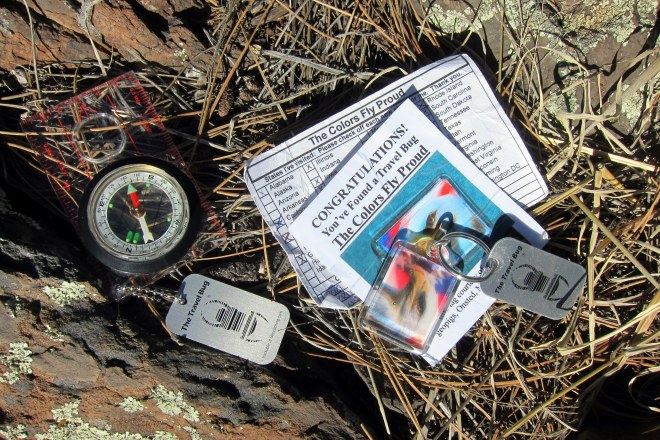 From the same cache, I retrieved the Travel Bug on the left, which ironically was affixed to a compass……anyone remember how those things work?  This bug will travel home with me where I will likely place it in other bug’s original cache……just like the symmetry of it all!

On yet another outing I located this cache along an old abandoned railroad bed.

After logging the find, I took the nail with the number “28” inscribed on its head.  Not sure what the nail signified; I turned to my buddy Jeff, who knows a lot about railroading and railroad history…..he even has his own rail car!  Jeff informs me that the nail was pounded into the end of a rail tie to denote the year the track was built or repaired…..in this case “1928”.  Pretty neat!

The course is suspended high off the ground in Ponderosa Pines and consists of wobbly bridges, swings, nets, barrels, suspension cable walks, and zip lines.  Didn’t try the course this stay, but it is now on my bucket list!

All the trails within the Fort Tuthill complex are multi use…..meaning hiking, biking and equestrian.

Most of the trails were sinuous single track with gentle changes of elevation. 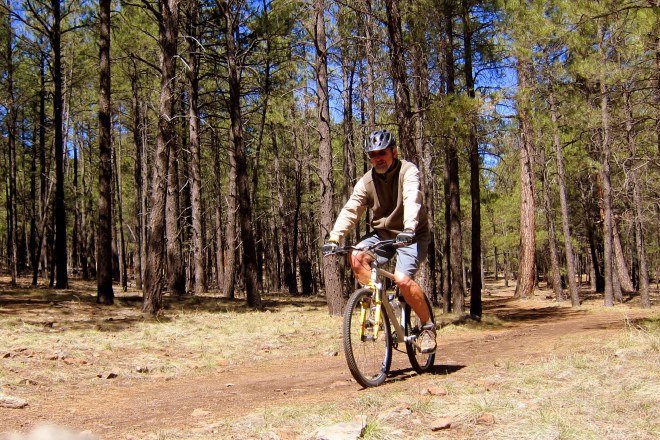 However some sections were more challenging, consisting of steep climbs, rocks and drops.  Also natural hazards, one of which brought me to a rather abrupt halt! 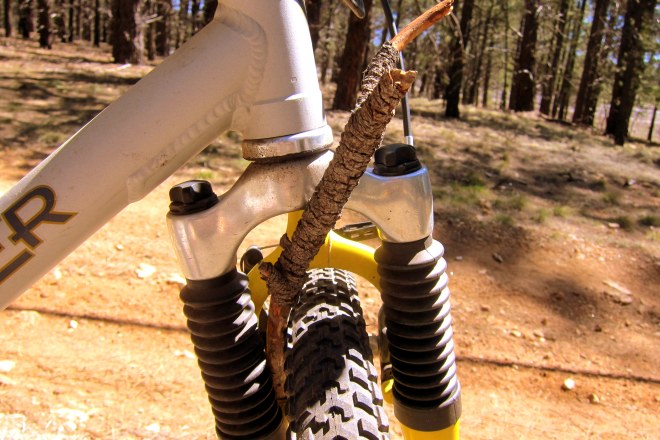 In addition, there is a very well maintained and very long Rail-trail that connects Fort Tuthill with the city of Flagstaff. 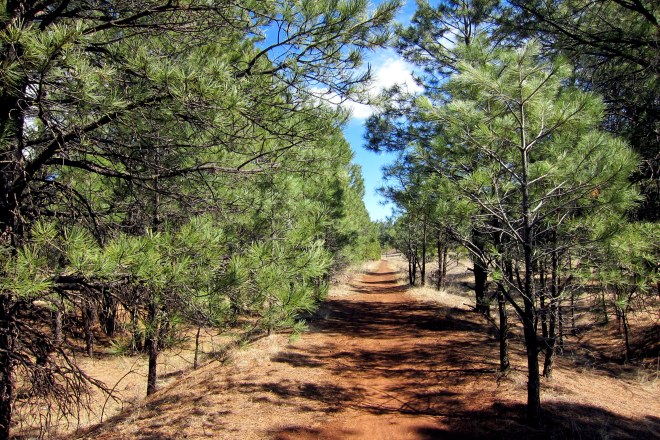 Even though I didn’t encounter any horse folks on my many ventures into the woods, I did see evidence that mountain bikers and equestrians can coexist peacefully on the same trail network. 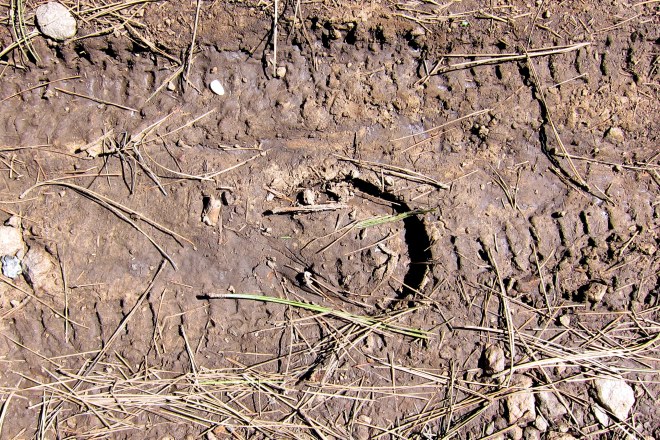 However, other critters were spotted along the trail as I came rolling by.

Also nearby, there was a nicely designed Bike Skills Park that featured an elevated launching point which fed into a number of humps, bumps berms and chutes.

With enough launch speed one could bike the entire circuit without pedaling…..with too much speed, one could become airborne!

Deciding I just had to try this, I set up the camera, hit record, and made my way to the beginner loop…..to see if I made it check out the video at:  http://youtu.be/X0LXhmiCRWc

As much as we enjoyed hanging around the campground and enjoying the peace and quiet, the city of Flagstaff has a lot to offer as well.

With a population of just over 68,000, the City of Flagstaff has a similar vibe to our hometown in Maine.  In addition to being a college town, it features a number of architecturally significant buildings and is bisected by a railroad.  Also, Flagstaff is home to The US Naval Observatory and the national dark skies facility for the Department of Defense.

Which, unfortunately is not open to the public…..it would be a neat place to tour!

Flagstaff came about its unusual name in a rather innocuous way.  Back in 1876, a Boston (yes, Boston) scouting party stripped a Ponderosa Pine of its branches and created a pole to fly the American Flag.  The flag pole remained for years and became a geographic reference point for the burgeoning community……which everyone knew as Flagstaff, and the name stuck.

Due to its prime location, Flagstaff became a major east-west corridor for the transcontinental railroad and in the late 1800’s nearly 100 trains a day would rumble through town.  Today, Flagstaff is still an important railroad hub and the regional office for Warren Buffet’s Burlington Northern and Santa Fe Railway.

A former ranching, lumber and railroad town, Flagstaff has evolved into a cosmopolitan city.  Amtrak as well as freight trains still rumble through town.  However other early enterprises have been surpassed by educational institutions, industry and tourism…..Northern Arizona University, as well as Nestle/Purina and W.L. Gore Company now call Flagstaff home.

After a day of exploring the city, Kit and I treated ourselves to a great meal at a local watering hole that came highly recommended.

Their expertly crafted beer is brewed in-house and was incredible! 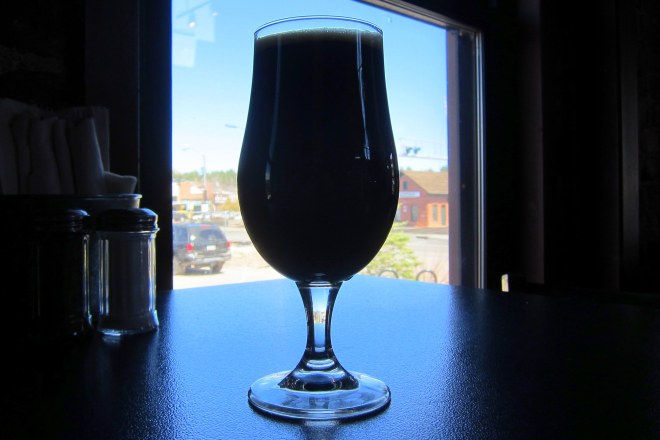 As was their tavern fare!

And the homemade dessert!

As we waddled back to the truck and made our way to the camper, Kit and I decided this area is in our top five RV destinations so far!

Stay tuned for the next issue…..Bill and Kit’s Adventures in Grand Canyon National Park!

Kit’s Bit’s: Fort Tuthill is one of my very favorite camp grounds.  Bill can find so many things to do, which allows me to catch up on my reading and get in some relaxing time.  The weather is a nice reminder of home, warm days and cool nights.  I also love browsing the local area.  The town has quite a lot of character and is modern enough to have some decent shopping.  Did I mention that Bill gets “lots” of bike and hike time?