In life, it’s not where you go, it’s who you travel with.
Charles Schulz

Friday, February 2, 2018: Up, broke camp and departed NAWS, China Lake, California under partly sunny skies, and temperatures in the upper 60-degrees. Today, in order to head south, Kit and I decided to meander on a number of local backroads.

Nearing the noon hour, we came upon the junction of Highway 247 and Old Woman Springs Road, and decided it was time for a break. Spotting a very large dirt lot, I pulled the rig in and intended to climb into the camper for a roadside lunch. However, as soon as the truck doors opened we were engulfed by this incredible smell of barbeque coming from the nearby Café 247.

So, that quick…our plans changed! Walking in we learned that this quirky roadside dive is a regional favorite of off-road vehicle enthusiasts from the California coast as they head toward the desert playground of Yucca Valley.

It appears that it’s a tradition to leave one of your license plates to festoon the café walls…an activity we did not participate in.

The meat is smoked then grilled outside by two local characters…one of which did not want his picture taken…the aroma wafting off the grill is their main marketing tool. Worked on us!

According to Butch the grill master, the cafés specialty is the Baby Back Ribs.

But I chose the Tri-tip instead. 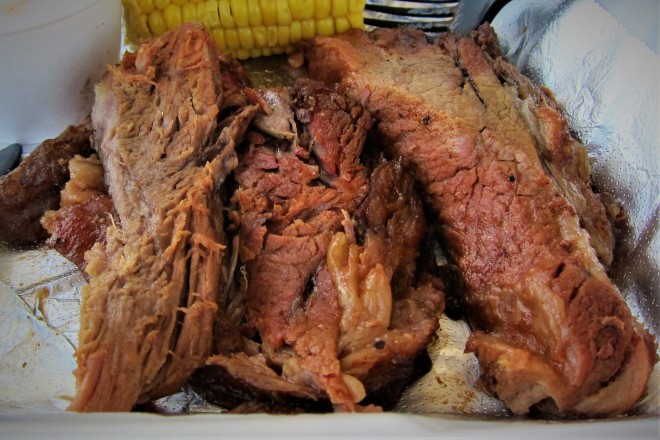 Which was the most succulent and flavorful beef I’ve ever tasted! What a gem of a place, and in the middle of nowhere…another chance encounter due to our primary method of serendipity travel!

With full bellies, we once again headed south and by 1600 hours were entering the outskirts of Palm Desert, California. 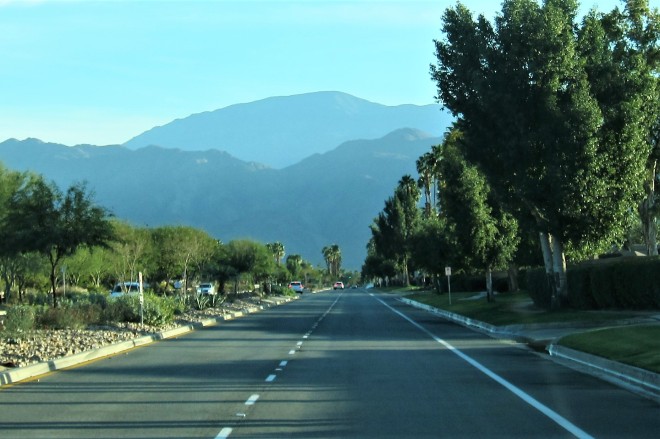 This is our first time in this area, and we quickly discovered a verdant and manicured oasis in the middle of the Sonoran Desert. Replete with resorts, golf courses and world class entertainment venues, the region is inhabited by mainly retired folks from Coastal California…two of which were some friends from our old San Diego neighborhood.

Alan and Linda have resided in Palm Desert for the past few years and love the area. Alan was my brother Don’s best friend in high school, and upon graduating in 1967, they decided to join the Army under the buddy program. However, as luck would have it, Alan couldn’t leave for basic training as scheduled so followed Don by a few weeks. This mismatch in timing resulted in Don being assigned to Anchorage, Alaska…and Alan being sent to Vietnam. As a result of Alan’s combat experience, he is battling medical issues to this day, but has a great attitude and loving support from Linda.

We had intended to stay in an RV Park near their home, but the least expensive facility in this rather exclusive region was $95.00 a night…yikkers! So, a bit of research brought us to the town of La Quinta a short distance to the south and a pleasant county park, Lake Cahuilla Recreation Area. 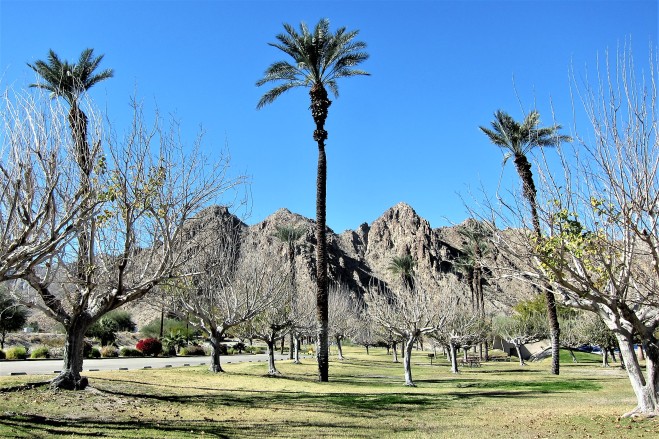 Where we settled into a nice camp spot for three days.

Surrounded by the stark beauty of the Santa Rosa Mountains, Lake Cahuilla (pronounced Kah-wee-ah) is a favorite recreation area in the Coachella Valley and we felt much more at home in this environment then the fancy RV resort style establishments.

A nice cocktail, a quick meal, and a walk about the park, brought the day to a close.

Saturday, February 3 through Tuesday, February 6, 2018-La Quinta, California: Okay, the astute reader might have picked up on the fact that the dates we stayed equal more the three…yep, found so much to do we extended an additional two days. And who would blame us, with beautiful weather and sights like this out our camper window each morning! 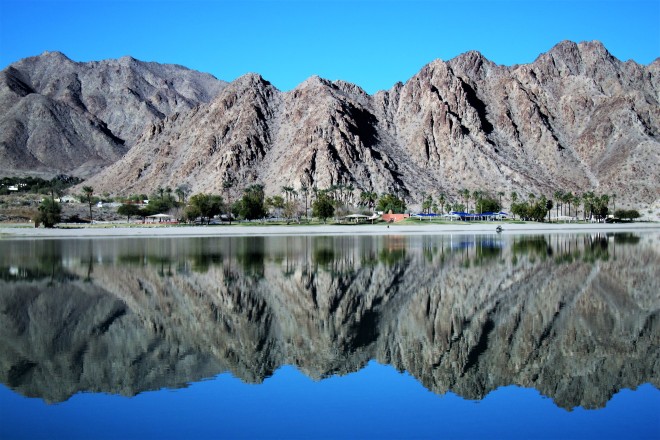 This experience underlines why we hate to make advance reservations, or even commit to plans to be somewhere at a specific date. We far prefer to make decisions such as where to stay, how long to stay, and what to do while in an area, real time. In fact, we hadn’t even planned to head into this area until two days ago!

The primary reason for visiting this region was to spend time with Alan and Linda…who we hadn’t seen since they moved here from El Cajon, California a few years back. Deciding to meetup for dinner, they recommended a brewhouse named Babe’s.

In addition to their in-house microbrewery, Babe’s is rumored to serve the finest barbeque in the region.

Since yesterday’s Tri Tip was so incredible, I decided to see if lightning strikes twice, and ordered it again…this time with a helping of Baby Back Ribs, alongside an incredible baked sweet potato topped with a honey pecan glaze.

Well, I only had one complaint. As much as I wanted to, I could not finish the whole thing, so half went back to the camper for another meal. Everyone else’s meal was equally incredible…as was the company and conversation! Alan and I reminisced about growing up in 1960’s San Diego while the women let us ramble on and entertained themselves with their own conversation. It was a great evening! In fact, so great, that we decided to meet up the following morning for a late breakfast at The Broken Yoke.

Where the good food and conversation continued from where we left off. Oh, and please excuse the screen grab from their website…I was too busy eating and visiting to snap a photo of my incredible Golden State Benedict!

After saying our goodbyes, Kit and I meandered back to our campsite by way of downtown La Quinta.

We couldn’t get enough of this communities beautifully landscaped streets which border gated communities, such as the famed PGA West…a paradise for golfers. Eventually we found ourselves in Old Town La Quinta…which is an unusual name for a community that is only 35 years in existence, but it does have the look and feel of old Spanish architecture.

Primarily a shopping and dining area, Old Town La Quinta seemed the perfect place to grab a snack and some adult beverages.

Before returning to the campground for another stroll along the lakeside. 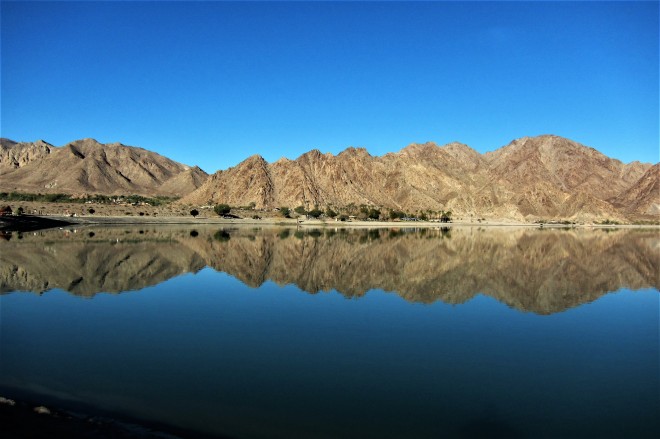 OK, full disclosure…that last sentence served to sneak in another photo of the hills surrounding the still waters of beautiful Lake Cahuilla.

One reason we elected to extend our stay in this area, was to take the 45-minute drive northwest and ride the popular Palm Springs Aerial Tramway, the largest rotating aerial tramway in the world. 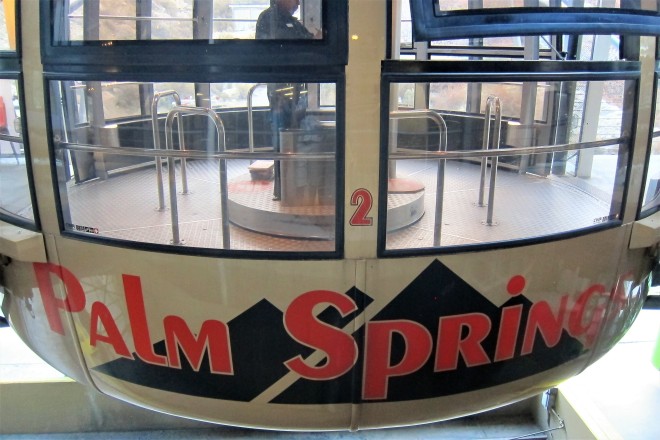 Located just to the west of the resort community of Palm Springs, with an elevation of 479 feet, one must negotiate a rather steep, winding road to the tram’s base station which sits at an elevation of 2,643 feet.

Where a small museum and very informative film explains the genesis and construction of this engineering marvel. 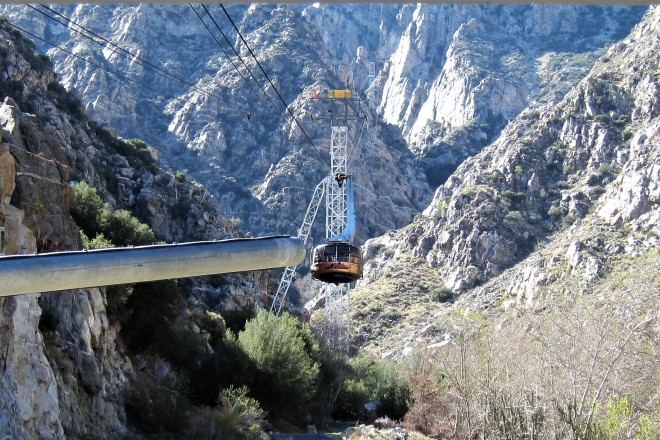 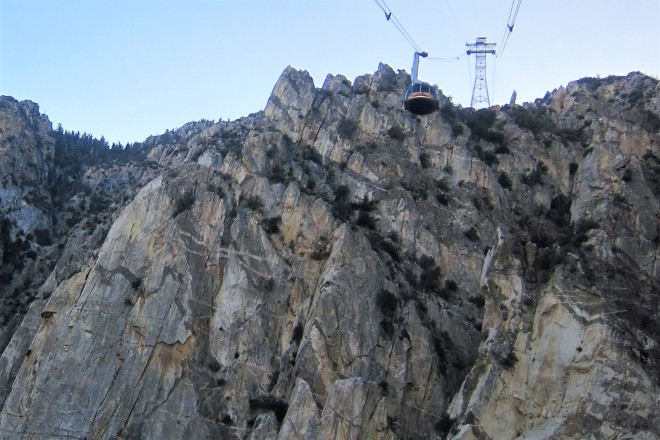 The two, one going upbound as the second descends, 18-foot diameter tram-cars rotate twice during the trip, so every passenger can enjoy a spectacular view in all directions. 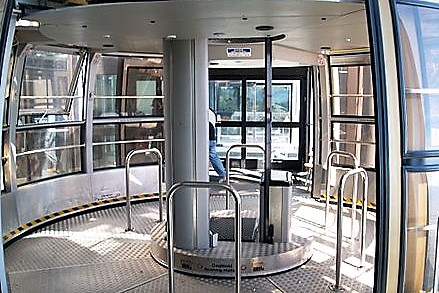 Above Image Captured From The Internet.

The total distance traveled by cable is 12,708 feet which is suspended by five towers, the tallest being 227 feet. 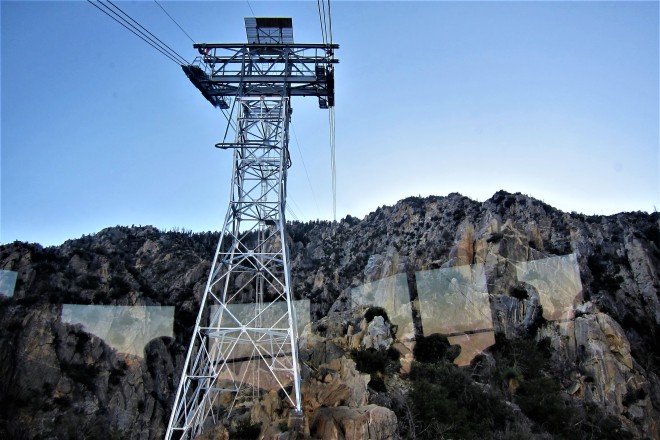 The total elevation gains of 8,307 feet from the valley floor treats passengers to five distinct life zones starting at the Sonoran Desert and ending at the alpine forest of the San Jacinto Mountains, where the temperatures are a good 35 degrees cooler.

Arriving at the mountain base station, we discovered the headquarters for the San Jacinto State Park. 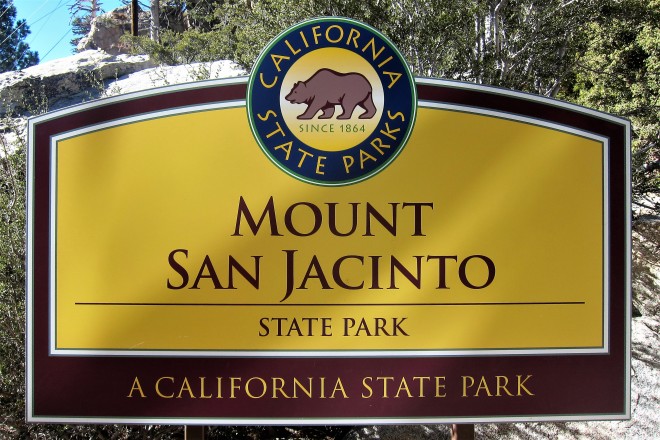 Where many alpine trails and nature walks can be accessed…including a summit trail to the 10,804-foot peak of the parks namesake mountain.

At this altitude of 8,516 feet above sea level the air is noticeably thinner, and the terrain is starkly different from the valley below. There is a refreshing sense of cool, clean air with the pungent aroma of pine trees…very similar to the feeling I get in the mountains back home in Maine. 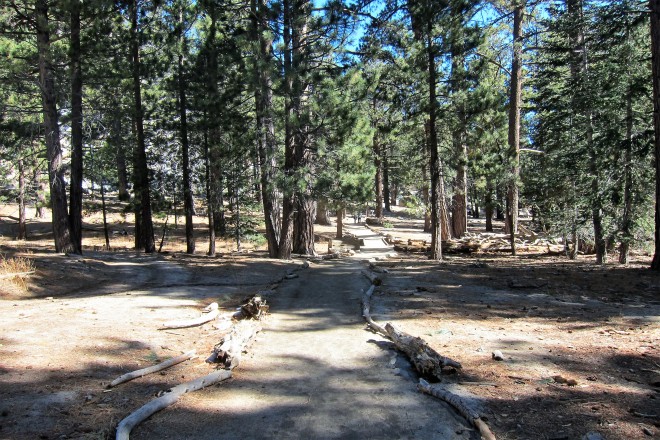 Trees abound everywhere at this altitude…the following closeup photo of bark is from an unidentified random tree. 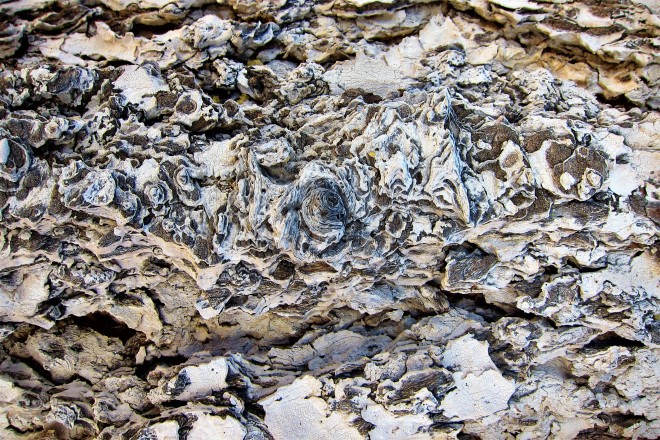 Can’t tell you much about it, other than I thought the texture provided interesting geometry.

A short distance from the tram station lies a rather large alpine meadow where various species of wildlife bed down for the evening. 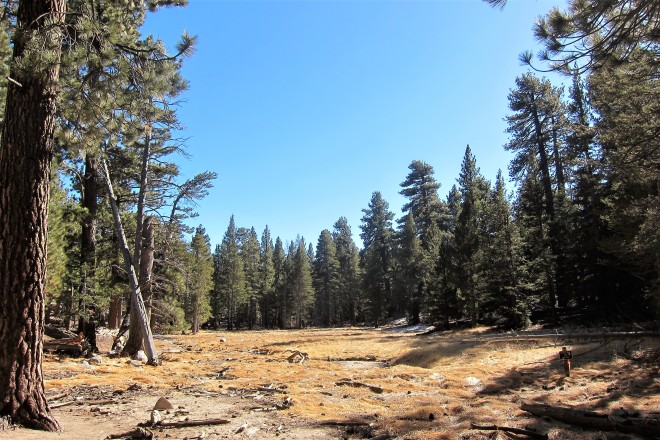 And a bit of snow remains on the north facing slopes from the last weather event of a few months ago.

The most popular pathway, and the one I explored, is the Desert View Trail where folks can catch a glimpse of the lesser mountain ranges in the valley far below. 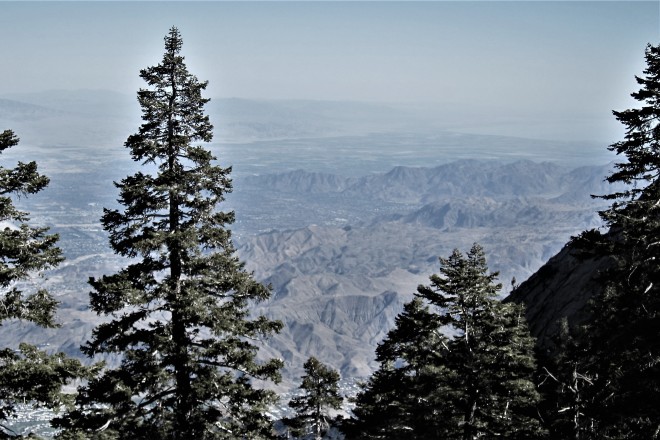 Returning to the Mountain Station, Kit and I made our way to a nice dining room with terraced seating that provides incredible tableside views. 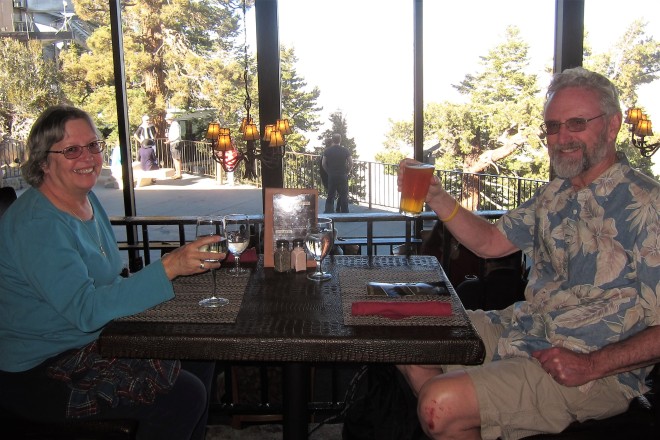 Where we enjoyed a pre-dinner beverage while enjoying the vista.

Kit mentions often that I take 90 percent of the photos on these trip, so I rarely appear in the pages of the journal…so she kindly snapped this one of me. 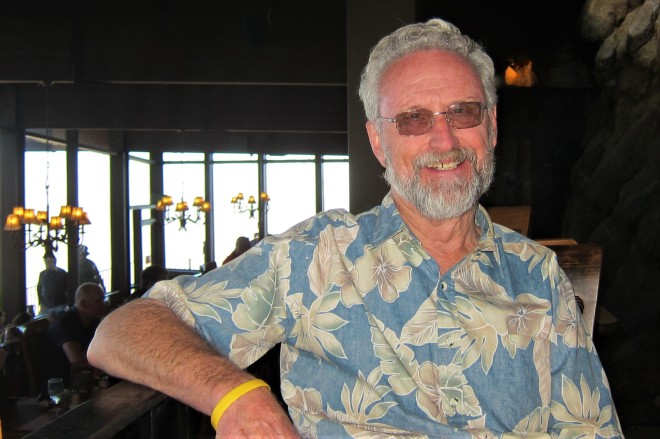 Personally, I think she is far more photogenic!

Soon it was time to queue up for the ride back down to the Base Station…which was as thrilling as the ride up!

While descending, the setting sun provided a dramatic backdrop to the sheer walls of Chino Canyon. 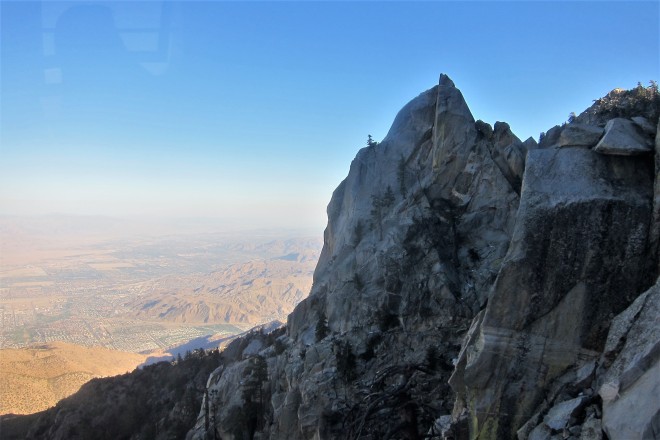 What an exhilarating ride, and highly recommended…one of the very few ways for us mere mortals to explore an alpine wilderness in this part of the Southwest!

The final day at Lake Cahuilla Recreation Area was down time spent relaxing and getting ready for the road. Since it was a day o’ leisure, I took the time to whip up some of my infamous avocado and egg on flatbread with salsa, cheddar cheese, and sour cream, concoctions.

Yep, that thing is a triple threat…breakfast, lunch, and dinner!

While Kit got caught up on her reading, I took my bike for a ride around the park and down some interesting dirt roads.

Lake Cahuilla is a manmade irrigation impoundment, fishing pond, and recreation facility that came to fruition in the early 1970’s. However, it is named after a vast prehistoric sea of 2,588,000 years ago that covered over 2,200 square miles of this area…hence all the shells imbedded in the hillsides. 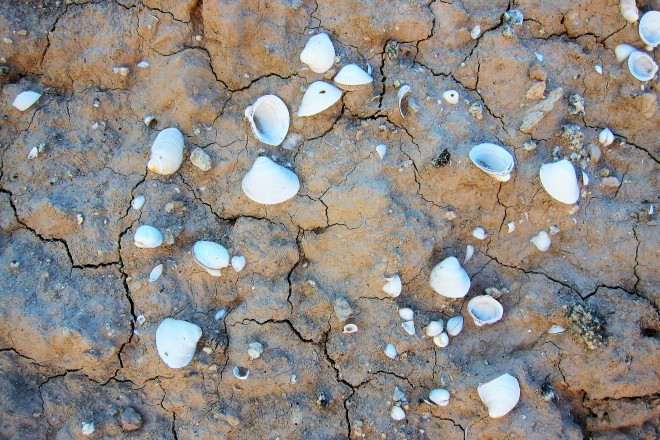 While poking about I also came upon the lakes inlet which is fed from the famed All American Irrigation Canal and a bit further, the outlet known as The Coachella Canal, which provides irrigation to thousands of acres of farmland in the valley.

A nice afternoon bike ride but time to return to camp where I did some reading and noticed from an online RV Forum that the Recreational Vehicle Industry Association (RVIA) had just released production figures for calendar year 2017…504,599 new RV units! That’s a huge jump from years past, no wonder it’s getting harder to travel about willy-nilly and expect a spot to camp at the spur of the moment!?!? With that disturbing thought, I decided to just sit, contemplate life, and stare across the lake as the afternoon turned into dusk. 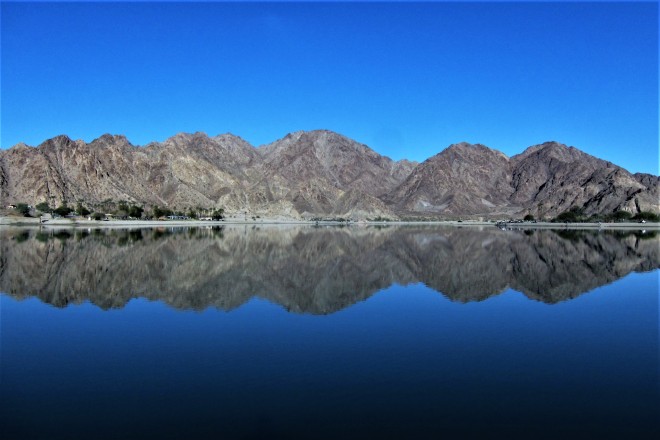 Yep, yet another nonapologetic photo of the amazing sights over the lake.

Kit’s Bit’s: We had quite a nice time in this area! The highlight for me was visiting with Alan & Linda. Always good to get together with them. The weather was as perfect as can be and there were endless places to explore. I was quite surprised at how green the area is. There are lots of mature trees and beautiful bushes and flowers in the area. Of course, being near the PGA West Headquarters, most of the communities are “Gated” so we couldn’t drive through them. There are many shopping opportunities and restaurants in this area. It’s a beautiful place to retire for folks from SoCal, where they can still make it “home” occasionally without having to fly.