One of the great things about travel is that you find out how many good, kind people there are.

Saturday, February 24 through Wednesday, March 7, 2018: DewBea RV Resort, Tucson, Arizona: The North Tucson home of brother Dewey (Dew) and Bea (Bea) is one of our favorite camp spots ever!

As it is surrounded by incredible desert landscaping and plenty of room to park our 30-foot camper. Even though it is hard to detect, their own fifth wheel trailer is parked behind ours…that’s how large the driveway is! Yep, dew and Bea are avid RV’rs and have installed 30amp power outlets, fresh water supply availability, and even access to their sewer drain for dumping of tanks when needed. And, to top it all off…they are the consummate RV hosts.

And, are ably assisted by their staff, Kali and Pinquito.

The twelve days visiting Dewey and Bea were filled with eating, visiting, eating, shopping, eating, sightseeing, eating, working, eating, storytelling, and a bit of eating. Many meals were prepared in house by Bea, or in trailer by Kit and were incredible…however being the typical retirees we ate out a fair amount as well, as the following photos can attest to! 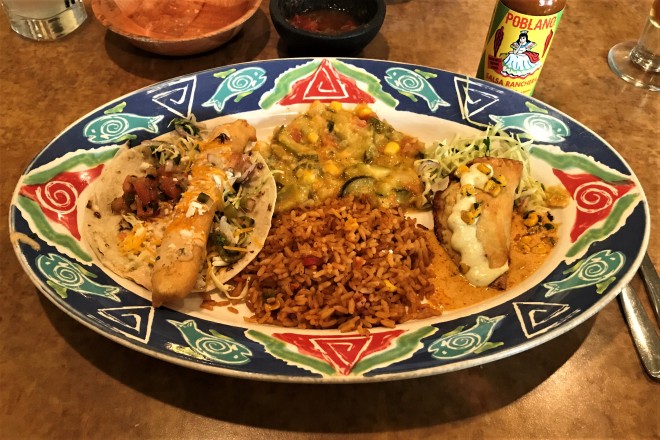 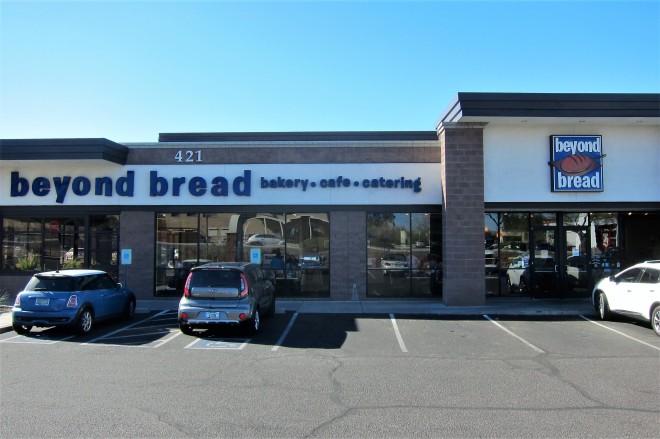 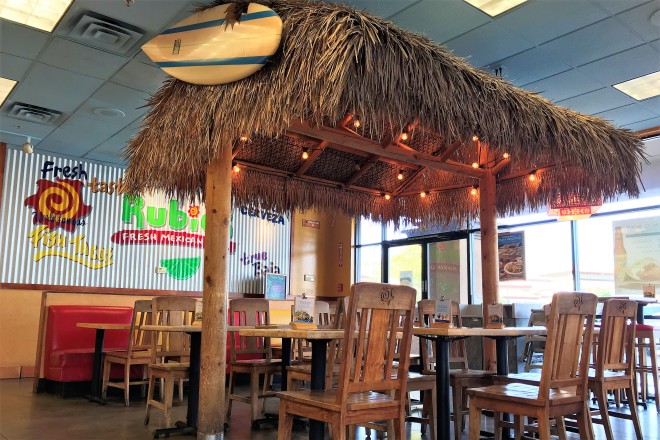 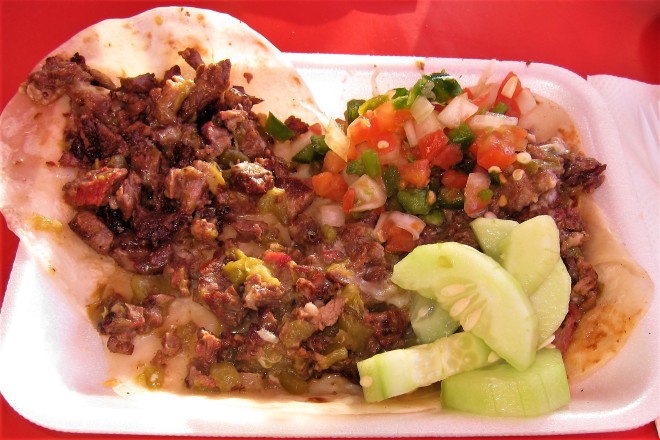 And many more that I failed to snap photos of!

Of course, we did more than eat…well, not much more, but we were able to work on our inherited home a few miles south of Dew and Bea’s place. This is year three of a multi-year project to go through everything and dispose of the 90% that wasn’t wanted by anyone in the family.

For this year we concentrated on the shed, and unloaded, as you can see, a huge pile of stored items. Some disappeared when we put them out by the curb, however the rest were hauled away by a junk dealer who assured us that what could be resold or recycled, would be and the rest deposited at the local landfill.

Bea was able to sell a few items to the neighborhood yard seller, including this fine-looking fellow.

He had been prominently displayed in the shed for many years and was mostly unharmed…well except for he was missing his back half. I mentioned to Bea, that if she walked to the other side of the wall he was hanging on, she was likely to see the rest of him…she didn’t bite, however.

That left a large amount of scrap steel, aluminum and iron. Bea started calling around and found Bobo, a scrap dealer who was delighted to haul the stuff away.

Bobo was large, easy going, and hilarious…he kept us in stitches the whole morning. Toward the end, he was hesitating to give us an amount that he would pay for all that metal…until we said, “no payment necessary, the entertainment value was payment enough”. We are now Bobo’s newest best friends!

Then there was the day I wanted to visit a Mexican pot place, and Kit asked to be dropped off at a nearby shopping mall…I think she misunderstood!?!?

You may remember last year I purchased a Golden Barrell Cactus as a pet substitute for our travels…since most RV’rs travel with pets, and we always felt a bit left out.

Well, surprisingly I nurtured Little Spikey, as he/she became to be known, through adolescence and the long transcontinental drive to the East Coast.  Currently Little Spikey is in the capable hands of our daughter Kim who has orders to walk him/her daily and only water Little Spikey when it rains in Arizona.  So, as a reward for enduring his/her first Maine winter, I decided to treat Little Spikey to a new, brightly colored, Mexican Pot! 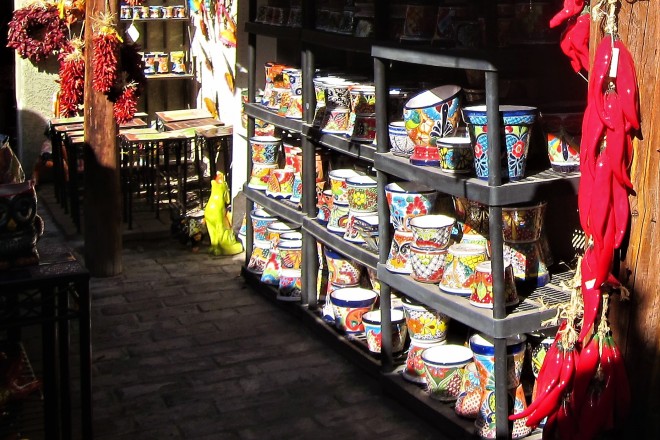 Being clueless about such things, a young Senorita offered to help me with size, shape, and color selection…unfortunately, I failed to snap a photo of Little Spikey’s new home before she so carefully triple bubble-wrapped it for the long journey home.  I also purchased a unique potting soil called “Desert Mix” which will be imported to Maine as well.

One beautiful Saturday, we drove out to Catalina State Park, a favorite of ours and Dew/Bea as well. There are numerous hiking opportunities, but on this day, we selected to stroll about the hilltop nature trail.

Which, in addition to placards identifying the various plants and geographic views… 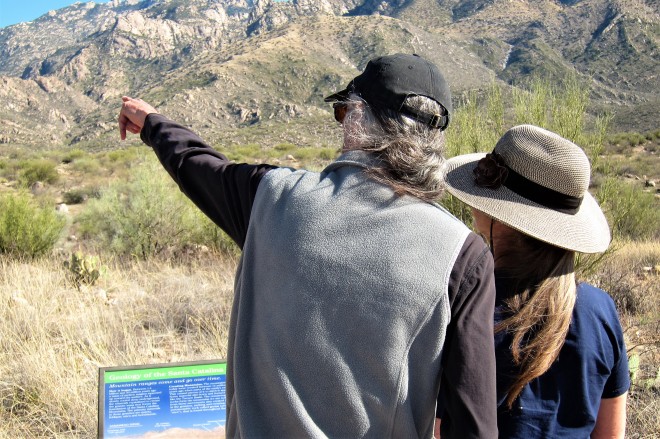 …there are strategically placed benches where one can take a load off and enjoy the expansive landscape.

Returning to the trailhead, there was a concert which we listened to for a bit…

…before returning home…by way of a Mexican restaurant, of course!

Speaking of which, one afternoon while driving around the barrio in search of an elusive and highly praised street taco stand, we came across these interesting murals painted on the side of various buildings.

Colorful, whimsical, and artistically well done, the murals dress up what would otherwise be a drab building’s exterior. The mural I personally liked the best was the following. 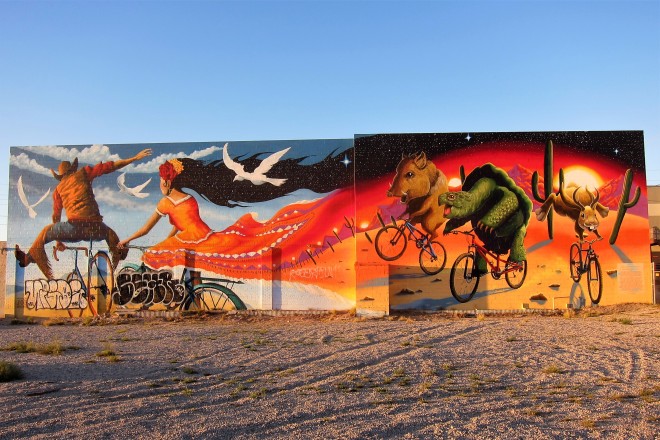 Because of the bicycling theme!

Brother Dewey is a motorhead, as I am…and has used some old engine parts to add to the wonderful desert landscaping about his property.

That 235 CID engine block, festooned with cacti, came from his 1955 Chevy. 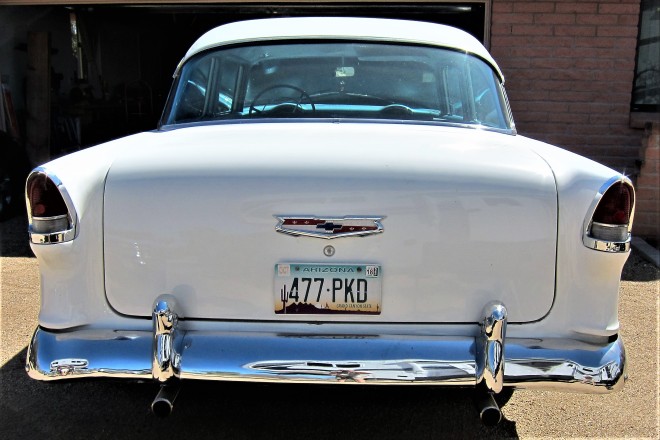 Because, as you may have guessed by the dual exhaust exiting under the bumper, there is now a far more potent engine under the hood!

While making another raid on the Golden Goose Re-Sale Shop, in order to look for more Hawaiian Shirt gold, I spied this offering. 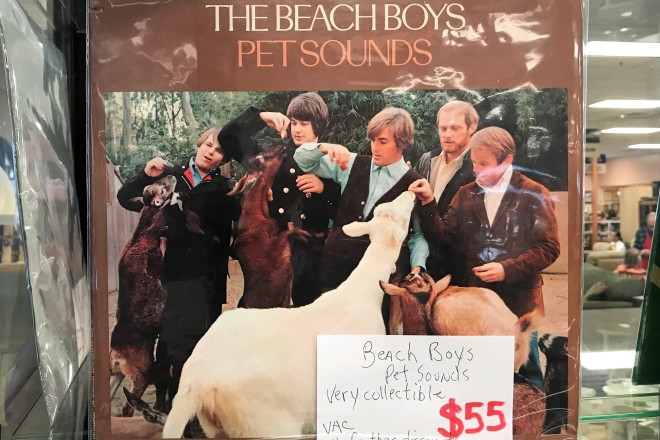 We have that same album at home packed away with other minutia of our 1960’s lives…time to cart those antique’s off to a vinyl record store and redeem them for cash!?!?

One of the coolest features at The DewBea RV Resort is the rooftop deck. Here you see brother Dan and brother Dew relaxing…

…along with Kit and I…

…as we enjoyed one of many classic Arizona sunsets!

Thursday, March 8, 2018: As much as we’ve enjoyed our stay at The DewBea RV Resort, we felt the need to relocate a few miles to the north and set up camp at Catalina State Park.

So, why leave a perfectly fine, and free, camp spot? Well, there is to be a grand and glorious celebration this Saturday at Dewey and Bea’s house and their driveway is needed for food trucks and 40 some odd guests…the guests are not odd, well some of them are, but the number of guests is an inexact amount! More on this celebration in a future issue.

Catalina State Park (CSP) is one of our favorite state parks to camp in the US. 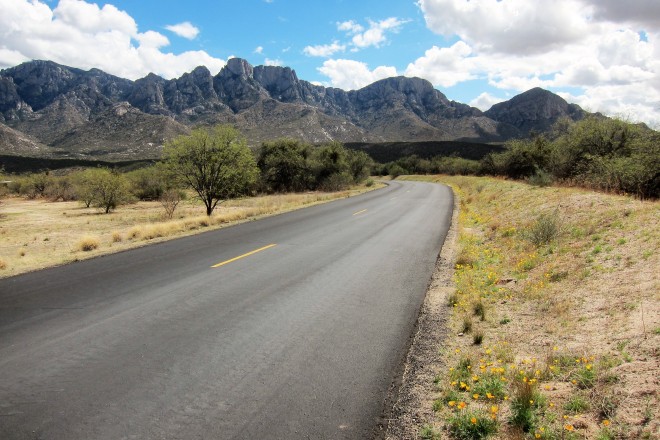 Nestled in the Oro Valley on the flanks of the Santa Catalina Mountains, it possesses every outdoor opportunity one might want, and since it is close to the half million folks that call Tucson home, it is extremely popular, and the campgrounds are usually full on the weekends. And since we seldom make reservation too far in advance, we were relegated to the group camping area, which on this weekend served as overflow.

Since it was dry camping, the overnight fee was greatly reduced, and parking was like living in the wild west…stake out your spot and protect it with all the gear you can arrange around it! Wasn’t really that bad, and besides we were only going to be here for a few days, and one of those days was the Big Party! More on that later.

Overflow camping is the great equalizer, the format is very democratic and reduces everyone to the same status…such as our neighbors exhibit.

The fellow to the left, a dentist from Minnesota, is camping in a tent, and the Canadian couple to the right is in a 44-foot, triple axel toy hauler being pulled by a Freightliner long-haul tractor…with a vehicle carried amidships! Yep, this is about the extremes of modern camping in America, and they both paid the same fee!

As mentioned, CSP has some great multi-use trails open to equestrians, hikers and mountain bikers.

And since my philosophy is why walk when you can ride, and since I don’t own a horse that I’m aware of, I struck out on my antique Gary Fisher mountain bike.

Enjoyed a nice ramble through the sagebrush and across a couple of streams, while dodging the occasional road-apple. Hey, I’ve got a great idea…if dog owners must carry those little blue bags and clean up after their animals, why don’t horse people? Of course, the bags would be a lot bigger, but it seems only fair, and besides, it would keep the horses exhaust off the trails!

While we are enjoying warm temperatures…

…back home they are dealing with one nor’easter after another…

The photo above is our home being battered by yet another coastal winter storm. Why so many vehicles in the driveway? Well it’s a Yankee method of snow abatement by ensuring accumulating snow is deposited on vehicles to be driven so the snow would ultimately be scattered along the roadway. Naw, not really…but it does appear to be that way for some folks, as after a major snowstorms a few Mainer’s clear a tiny viewport in the windshield and take off for work trailing a mini blizzard of snow in their wake.

Our poor grand-dog, Finny, is perplexed by all this white…

…and by how close to his belly the snow depth is!

As problematic as these events are to man and beast, all those hardy folks that have to, or choose to, winter over in Maine…the aftermath can be awe inspiring.

The above photo is taken by a friend’s daughter of their front yard across Maine’s Merrymeeting Bay…what a great shot, just looking at that image makes me feel chilly…think I’ll turn down the air conditioner!

As the sunsets over the western mountains… 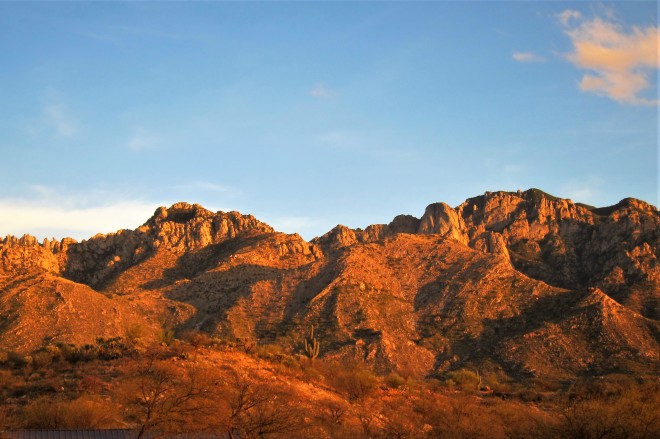 …I must close out this edition, as I’ve realized that I am near my self-imposed limit of words in any one journal.  But stay tuned for a special report on the “Mother of all Parties” coming soon to a website near you!

Kit’s Bit’s: Once again, we’ve enjoyed our stay in Tucson. These visits have evolved into work/play events which makes it nice. It allows us to help clear up some of the items Miriam and he husband Dean had collected over the years and of course, after a “long work day”, we enjoy a nice meal together. Lots of “behind the scene” efforts going on for the Big Party ahead! 😊