One way to get the most out of life is to look upon it as an adventure.

Sunday, January 20, 2019:  At 1028 hours, Kit and I departed Rickwood Caverns State Park under partly cloudy skies and a frosty temperature of 32 degrees.

We found our way onto Interstate 65 South before merging onto I-20 West passing through Bessemer, Alabama an hour later.  At 1311 we encountered the Mississippi state line and after a brief rest stop at their welcome center, motored on the west.

Approaching midafternoon, Kit started her daily internet search for an overnight stay and found a promising Mississippi State Park near the town of Morton, MS.  Calling first to see if there was room for us this evening, we pulled into Old Roosevelt State Park shortly after 1530 hours.

And set up on a very nicely wooded campsite.

As you may be able to tell, we generally leave truck connected to trailer when only staying the night…often we don’t even bother putting the trailers leveling jacks down.  True, the camper does jiggle a bit on its springs when we walk about but nothing that bothers either one of us.  We generally hook up the 30-amp power cord but sometimes don’t bother hooking up the fresh water or sewer hoses having ample fluid capacity on this style of camper.

Unlike many state parks we have camped at, this place is quite large featuring 109 RV sites in two separate campgrounds, and many more primitive campsites for tents.  Located in the Bienville National Forest and constructed in the mid 1930’s by the Civilian Conservation Corps, the park also has cabins, a large residential lodge, a 200-seat convention center, and a 600-seat performing arts and media center!  Many of these facilities are in wooded areas with views of Shadow Lake…a prime fishing impoundment for locals and visitors from away. 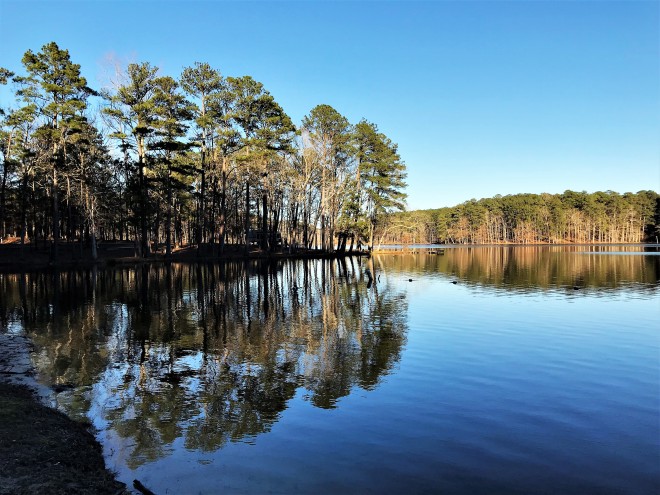 Walking along the lake shore, I scouted a few spots to view tonight’s Super Blood Wolf Moon before returning to the camper for dinner.

Moonrise in these parts was at 1905 hours so a few minutes before that time, I grabbed a flashlight and a camera then made my way through the cold evening air to the chosen spot. 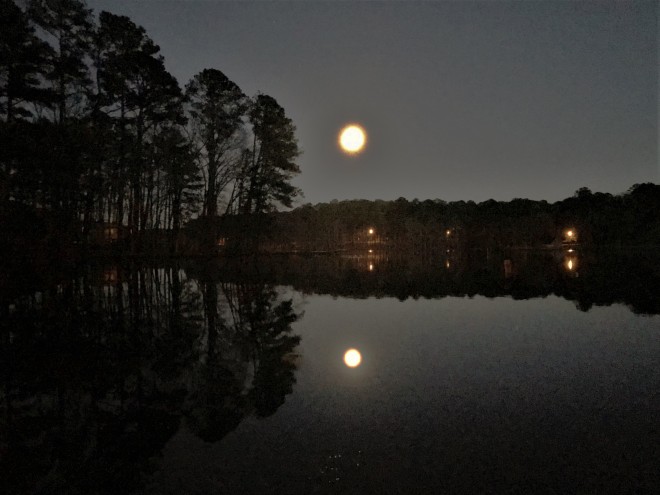 Where the moon rose and looked more like a sunrise…of course, just not as bright.  My camera does not give the image justice…it was a spectacular sight with the large orange/red moon being reflected on the surface of the placid lake.  Mesmerized by the celestial event I little noticed the rapidly falling temperatures.  After a while, it was time to return to the camper to seek warmth and a bit of spirit-based antifreeze…good night!

Monday, January 21, 2019:  As a person of a “certain age” I get up from bed a few times in the evening.  Upon crawling back under the sheets, and glancing through the skylight above our heads, I noticed the full moon was part way through the predicted lunar eclipse!  So, wanting to share this magical even with my life partner, I shook Kit awake.  Her response?  Ukjfk kls  jkdslr mne!  Which translates into &%$*%  ^#@  #%&*@#  +&* !  The view trough the plastic dome of the skylight did not produce an acceptable photo but the earths telltale bite out of the moon was quite noticeable.

Up at 0630, breakfast and computer fun preceded an underway time of 1034 hours.

We snaked along a few country roads and found our way to I-20 West.  It was a beautiful bright sunny morning with temperatures in the mid 40-degree range.

Shortly before noon found us crossing the Mississippi River…

…and entering the state of Louisiana.  This river has been our self-designated demarcation point between East and West.  Kit and I are not sure how much farther west we will travel this year before diving to the south.  Since we left about five weeks later than in the past, and since we want to return home earlier than June, it is unlikely we will travel all the way to the west coast as in previous Excellent Adventure trips…time will tell.

After a quick rest and lunch stop at the Louisiana Welcome Station, we continued west on I-20.  Kit started looking for places to overnight and suggested Barksdale Air Force Base a few hours down the highway and just east of Shreveport, Louisiana.

Calling ahead to ascertain availability, we pulled in to their Famcamp (Family Campground) at 1520 and set up on a nice site in the new recently expanded portion of the Famcamp which was sparsely populated as you can see. 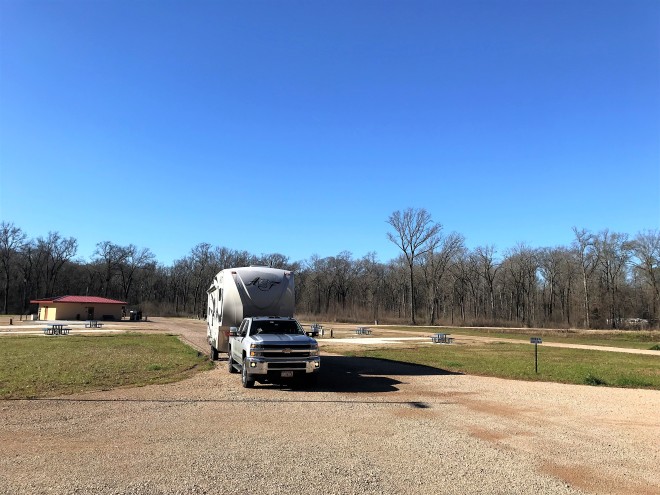 Following a walk about, dinner, and a nightcap, Kit and I enjoyed the sunset across the woods to the west of our site. 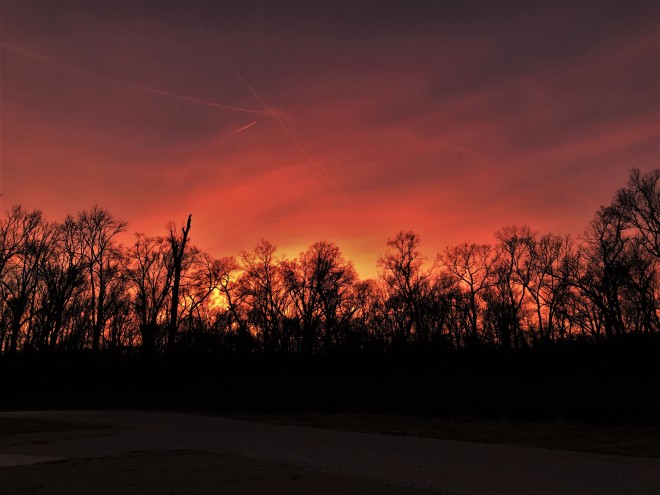 Barksdale AFB was established in 1932 and is the oldest bomber base in the nation.  Stationed here are 15,000 Air Force and civilian personnel who fly and maintain forty-four of the nation’s venerable B-52 Stratofortress.

Photo Taken from the Internet

In the aircrafts ten-year construction period, 744 were built of which 76 are still flying.  Before closing back in April of 1968, Dow Air Force Base in Bangor, Maine hosted a squadron of B-52 bombers flying aloft over the Atlantic during the Cold War period.

Our campsite was near the airfield, so we were witness to many B-52 flyovers.

The B-52’s first flight was in April 1952, and it’s predicted end of service life has been extended to the year 2045.  That’s nearly 90 years folks…an unprecedented operational life for any aircraft!

In addition to this important bomber, there are also inflight refueling aircraft stationed at Barksdale, and other support aircraft such as this squadron of B-1RD’s.

Nice layover at Barksdale AFB, but tomorrow we must start south in search of warmer weather.

Thursday, January 24, 2019:  Departed Barksdale AFB at 1008 under clear cool skies and wound our way back to Interstate 20 heading west through Shreveport, Louisiana. 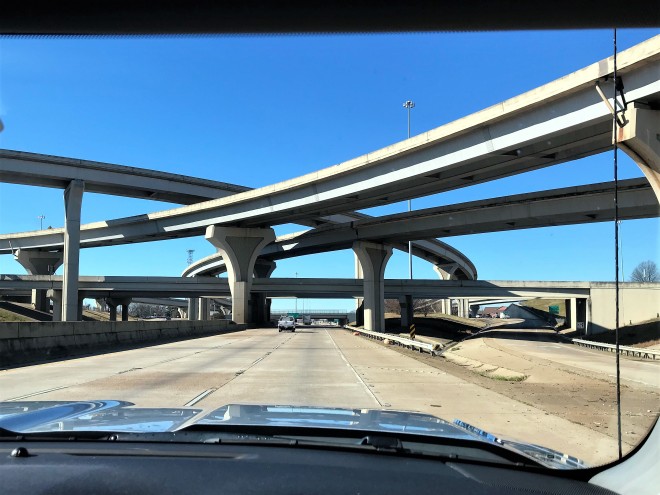 Within the hour we crossed over the Texas state line and began heading on a more southerly route via various Texas State Highways. 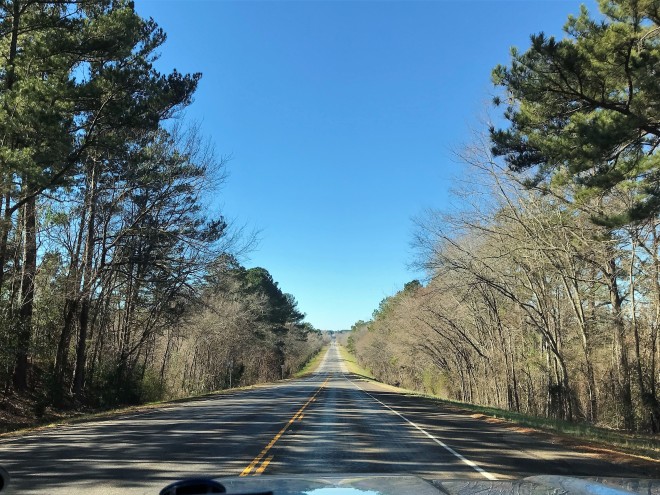 Kit and I much prefer the back roads of America, the so-called Blue Highways, as it allows us to see the true character of the United States and meet some wonderful local folks.

Many towns, especially in this part of Texas, are barely hanging on despite the robust economy of the country.  There are many boarded up storefronts and little commercial activity along main street.  These downhome and economically disadvantaged folks are likely one of the root causes that the 2016 election went the way it did.

Then there are the communities that appear to be unusually moody. 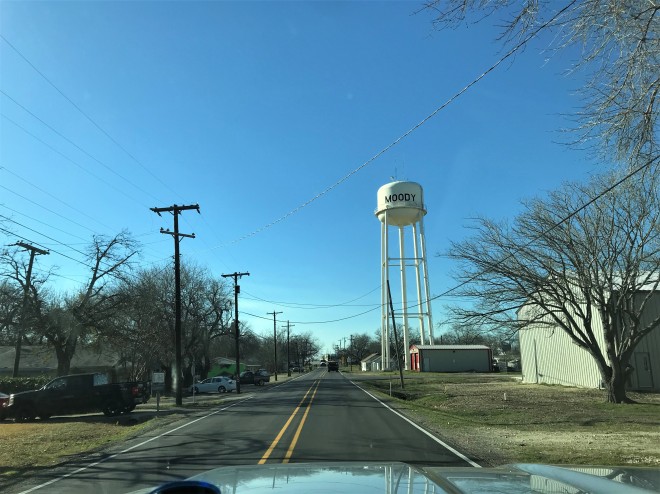 Another nice thing about traveling the Blue Highways, is the absence of congestion due to other road inhabitants… 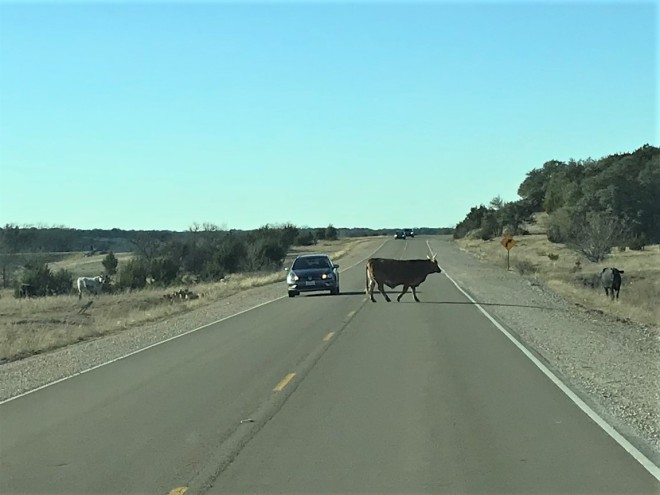 …well, except for the occasional steer that meanders across the highway in this area of free-range pasture land!

As we neared Austin, Kit called the lakeside campground of Belton Lakes Outdoor Recreation Area…a Fort Hood Army Post recreation facility known by its acronym BLORA.  Fortunately, they had room for us, so off the highway and down a few country roads we went.

Checked in and set up in a nice large campsite for the evening. 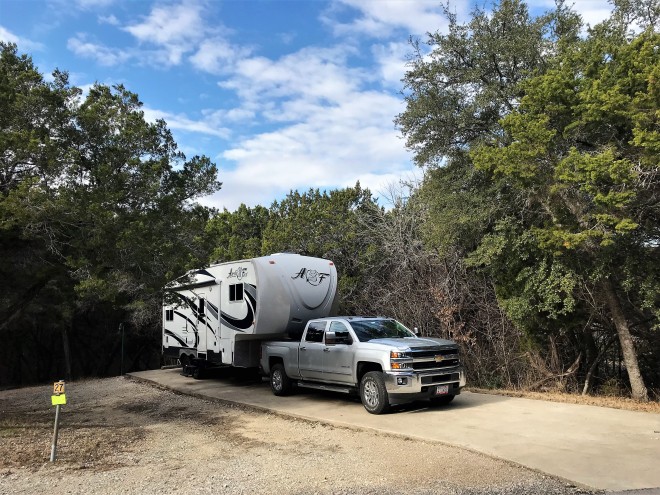 A bit of walking around, followed by some dinner and vino, followed by a bit of reading, and off to slumber-land…goodnight.

Friday, January 25, 2019 Belton Lakes, TX:  The last time we camped at BLORA was during a draught year and the lake was extremely low.  All the fishing and marina piers were sitting on mud and the concrete boat launch ramp was a good 100 yards from the water…not this time!

In the photo above what looks to be a boat ramp, is actually a road…you can see it disappear into the lake at the bottom of the photo and reemerge toward the top.  In addition, the floating dock and ramp to the left is now yards away from its submerged parking lot and land access. 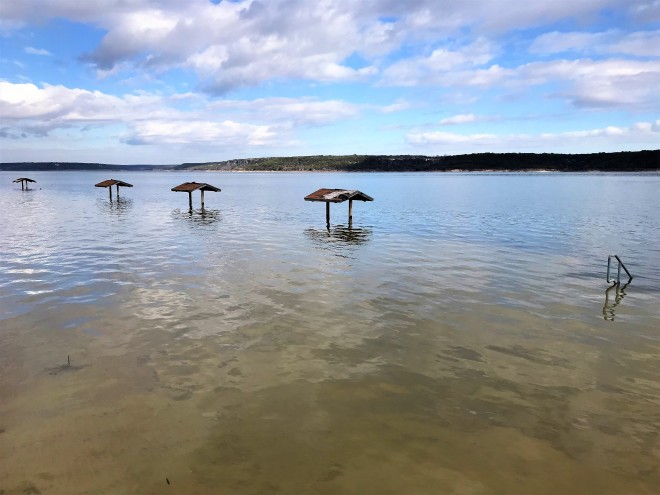 …as well as the lawn swings!

I bet kids would have fun trying to swing on that, if it wasn’t so cold.

As I walked along the shoreline, this little fellow joined me.

Tame and totally unafraid, I’m guessing he associates humans with being a soft touch for snacks!  However, I didn’t have anything to offer him, so he quickly lost interest in being my friend and waddled off to panhandle elsewhere.

Amongst the flood induced various flotsam and jetsam items scattered along the lakefront was this forlorn tennis shoe. 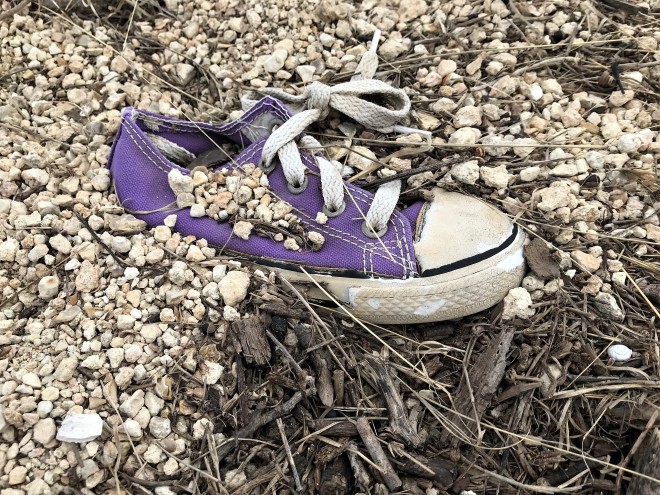 I’m betting some child was in a heap of trouble when he/she arrived home from a day at the lake sans one shoe.

We’ve decided to head south on Interstate 35 toward for San Antonio by way of downtown Austin.

Being a Sunday, it wasn’t too congested…however everyone on the highway was exceeding the posted speed limit of 75MPH and we were poking along at our customary 60 MPH…yikes!

Our plan was to stay at Fort Sam Houston Army base for a few weeks in order to explore this corner of South Texas.  Historically, we’ve had little trouble scoring a site at this large military campground, however this year there was only one site available and that was for only five nights!  We quickly found out that the National Rodeo is in town and that brings a lot of rodeo fans to the area’s campgrounds…oh well, the chance one takes traveling without an itinerary or advanced reservation.

Once on base and motoring toward the campground, we had to yield for oncoming traffic. 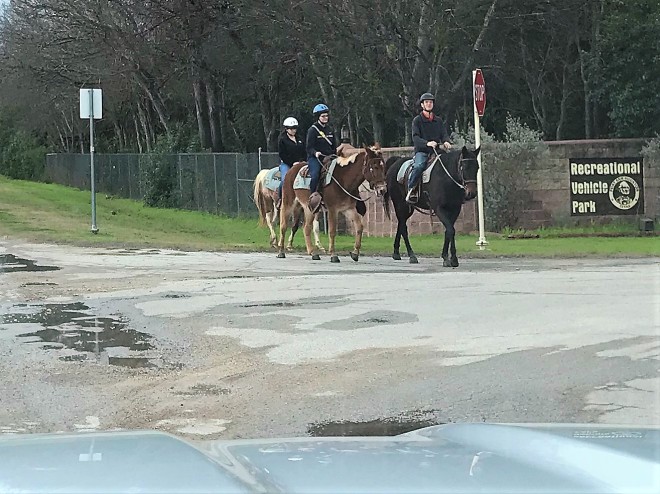 Before setting up on a nice corner lot near the laundry…which is a good thing as we are running short of shorts!

Stay tuned for the next journal…fun in Old San Antonio!

Kit’s Bit’s: We’re finally in warmer weather.  Not too warm, but, at least in the 50’s with a bit of humidity.  Unfortunately, it’s been mostly cloudy but, it doesn’t bother me at all.  We enjoyed a few quiet days and were able to catch up on household chores.  We’ve camped at Fort Sam Houston a few other times and it’s never been this crowded.  The one thing missing, though was wi-fi.  They had it at the office only, not throughout the park.  So, we had to rely on our own MiFi.  All in all, we enjoyed staying here.