Why do you go away? So that you can come back. So that you can see the place you came from with new eyes and extra colors. And the people there see you differently, too. Coming back to where you started is not the same as never leaving.
Terry Pratchett

Sunday, February 16 through Saturday, February 22, 2020-San Diego, California: When we last left Kit and Bill they had just greeted these to fine folks…. 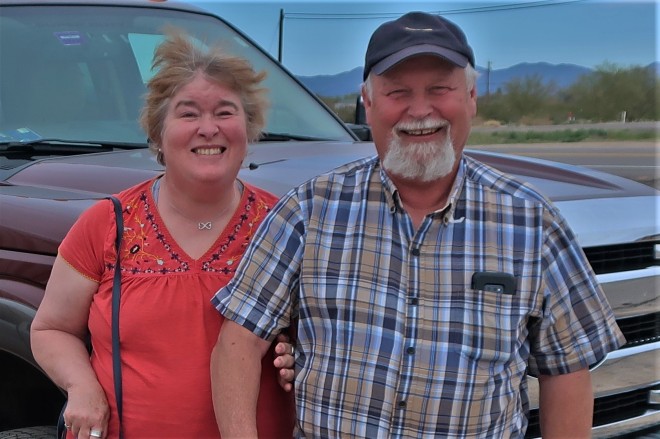 …who had just purchased this fine rig!

…which sparked intense longing in this fine woman.

You see, Kit and I have always wanted one of this beautiful and very well-made Silver Bullets!

Jeff and Catherine, good friends from Maine, purchased their 2020 Airstream 28RB in Florida a few weeks ago. Then traveled across country on a shake-down cruise, in order to see some sights, visit some friends and hang out with Kit and I for a bit…and we were very happy that they did!

Kit, Catherine, Jeff, and I spent a wonderful time in San Diego exploring some of its historic treasures and visiting some new attractions as well. Most every night we would gather at one or the others camper for a shared meal and evening cocktails. We frequently socialize at home in Maine so this fortunate meet-up provided an enjoyable extension to that.

The week consisted of many adventures, such as a visit to San Diego’s Balboa Park.

An historic and beautiful facility that has been written about extensively in previous years journal’s but is always enjoyable to see again.

As the girls went off on their own to explore the heritage exhibits of San Diego, Jeff and I headed for the Model Railroad Museum…at 27,000 square feet, it is the largest model train display in North America. There are four layouts of various scales with each having multiple main lines. The one Jeff and I enjoyed most was the “O” Gauge or Three Rail layout…the type many of us found under the tree on Christmas morning. 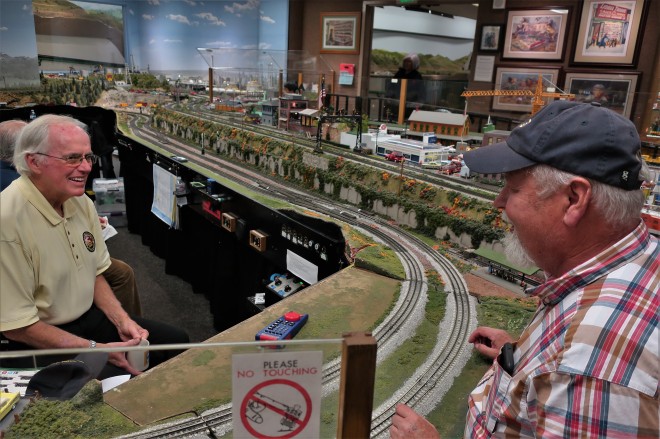 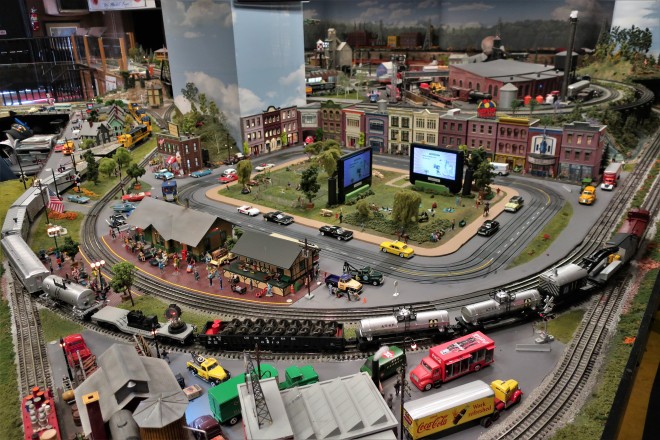 What a great experience! 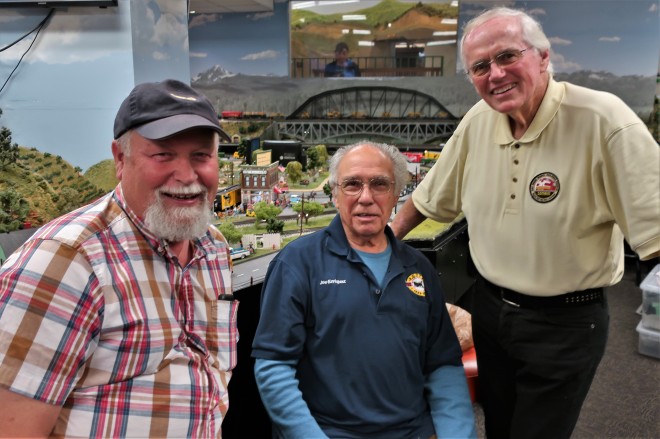 Then we met up with the girls and ambled down the pedestrian promenade.

Past the reflecting pool with the Botanical Garden in the background.

…which features traditional tavern fare, as well as unique offerings such as… 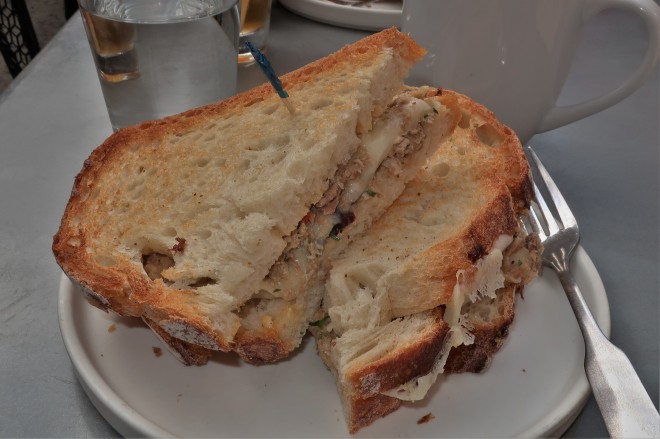 …this Catalina Island Tuna Melt with Capers and Fontina Cheese on Sourdough Bread. Which was some good!

On another day, Jeff and Catherine joined us on our annual pilgrimage to Rosecrans National Cemetery where many of my family is interred.

Situated on Point Loma which juts out into the Pacific Ocean, Rosecrans is a somber and serene place with beautiful views over the Pacific, as well as San Diego Bay, North Island, and the downtown area.

In addition to uncles, cousins, and one of my stepfathers…my mom lies here as well.

A proud WWII Navy Hospital Apprentice, mom served at Balboa Naval Hospital here in San Diego tending to injured combat sailors. It was one patient by the name of Dewey, who appreciated the care she gave and, following his release from the hospital, invited her to his home for a meal. It was at this dinner she met another US Navy sailor recently home from duty in the South Pacific that would become my father.

While at Rosecrans, we returned a kind favor to a good friend CeCe whose father in interred here as well, she often brings flowers for my moms’ gravesite when she visits.

CeCe, an officer with TSA is on assignment in Florida, so we were unable to visit her this trip.

Thought about continuing out on the point to visit Cabrillo National Monument, but this being a holiday weekend, the line at the gate was longer than we wanted to endure…and since all four of us have visited Cabrillo in the past we made a three-point-turn and headed north.

Coming down from Point Loma, I was struck by how beautiful our childhood hometown truly is. 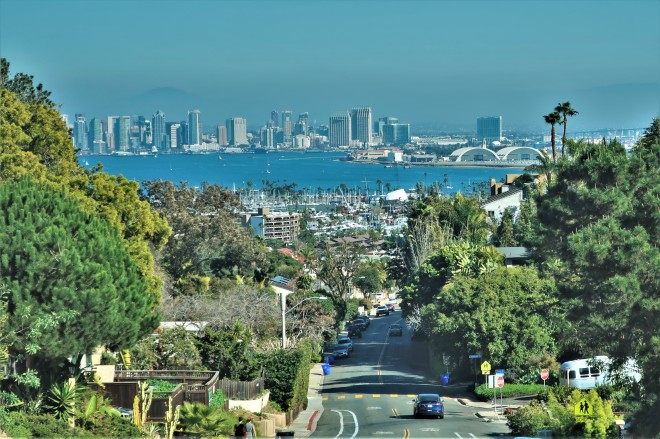 San Diego is a fairly large city with a population of 1.3 million and an additional 1.5 million in the County. However, San Diego still has a small-town vibe similar to other ocean side villages that hug the Pacific Ocean.

Back down at sea level, we drove about Liberty Station. 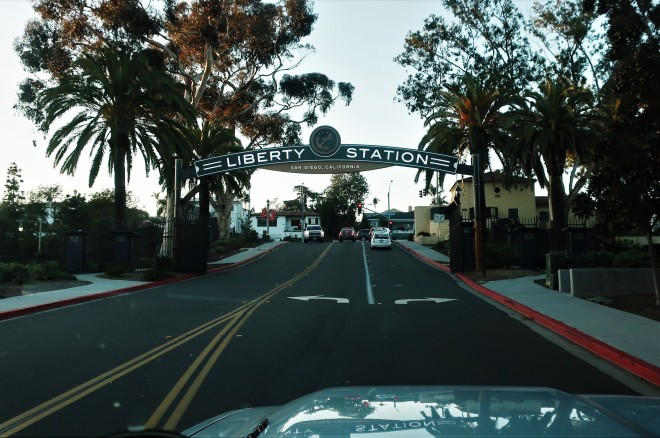 A former Navy training Center, it was home to the West Coast Recruit Training Command, where new enlistees, including myself in 1965, learn the ropes (pun intended) of shipboard life….and to that end, some of that training occurred on the USS Recruit. 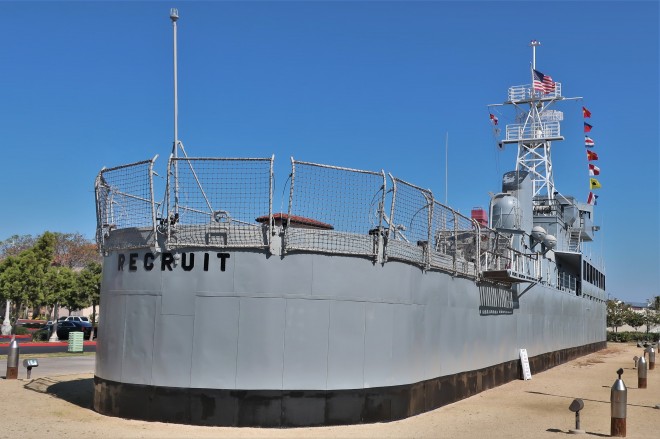 A building made to resemble a WWII warship, the USS Recruit was frequently called the USS Neversail.

…where I, and millions of prospective sailors, learned the seagoing trade.

When the Naval Training Center closed back in 1997, the land and buildings were transferred to the City of San Diego. The historic base was restored for use as business offices, shops, condominiums, and restaurants…such as the Corvette Diner.

Where its namesake, a 1959 Corvette, holds court behind the waitress station… 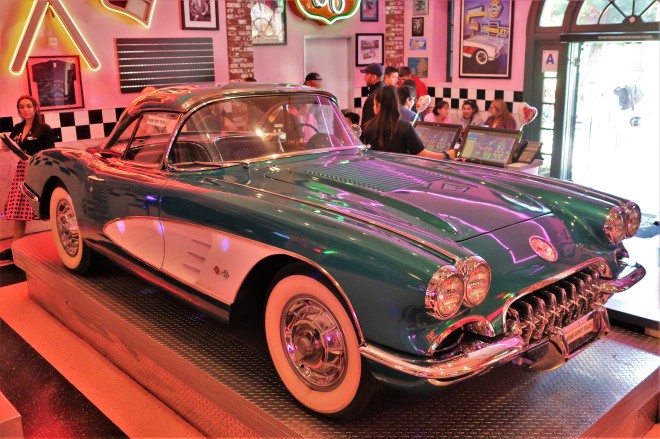 …and a talented DJ spins early rock and roll records from her booth.

Jeff and I requested a few meaningful songs, much to the surprise and joy of our dates.

At one point the DJ announced a contest for the person whom had traveled the furthest to dine with them.

And Jeff won because he and Catherine traveled 7 miles further then Kit and me!

…this delicious caramel, banana and chocolate malt, which was almost a meal in itself!

And entrees, such as this… 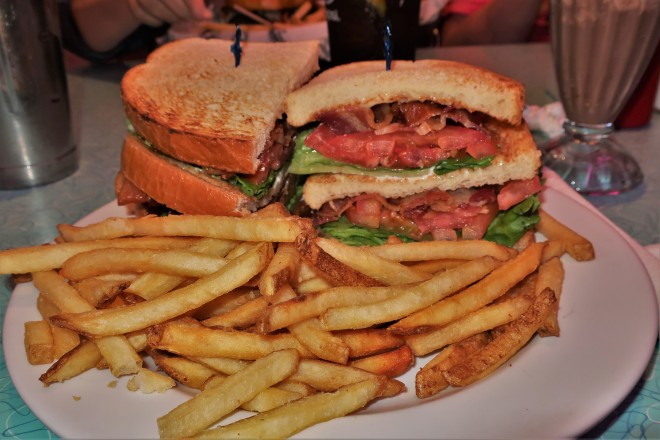 …double decker BLT, which was delicious and ample enough for two meals!

On one pleasant afternoon, we set up our site for a barbeque… 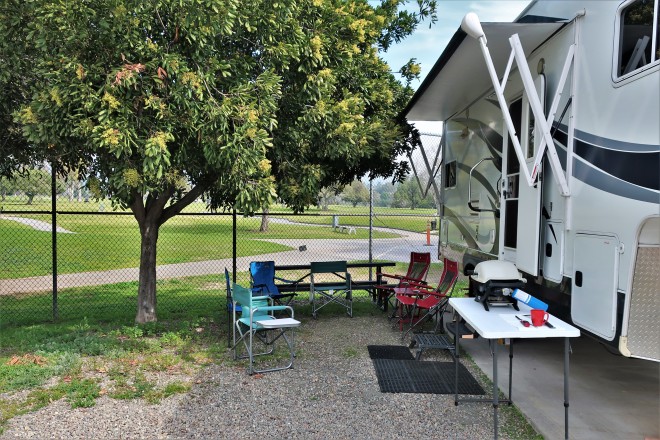 …and invited mutual friends Reed and Beta to join us. 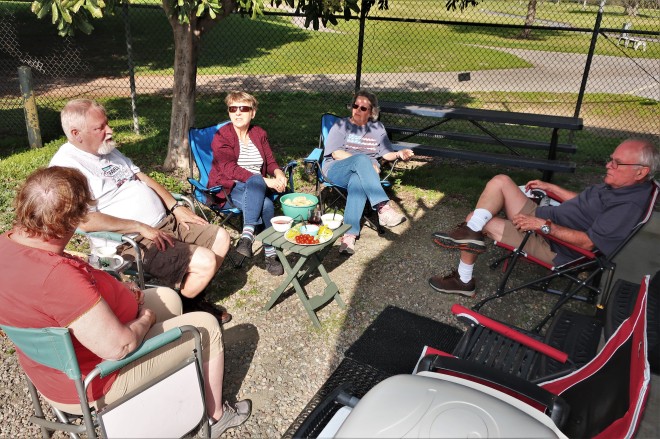 I believe we all had a great time, socializing, laughing, telling stories, eating, and drinking…I know that I sure did!

Traveling about the United States in a camper results in items breaking or fasteners working themselves out due to the constant vibration imparted to the unit by the nation’s highways. Well, for a few days now, I’ve needed some hardware to fix some of those items…and Jeff mentioned that he too had a need for a hardware store. Well, Kit remembers as a child going with her father to San Diego Hardware to purchase similar products…so off we went.

Well, over the ensuing years, San Diego Hardware has morphed into a high-class shop of expensive decorative cabinet hardware and household accessories.

A bust for our nut and bolt needs, but an interesting place to poke around in anyway.

In addition to unusual “hardware” such as these Speakeasy Grills…

…and a great display of door knockers…

…as well as a complete line of high-grade water closets…

…positioned in such a way for socialization and with over the shoulder natural light for reading!

While off to find an actual hardware store we drove past this unique piece of architecture.

The sign said it housed an Innovation Center…whatever that is. 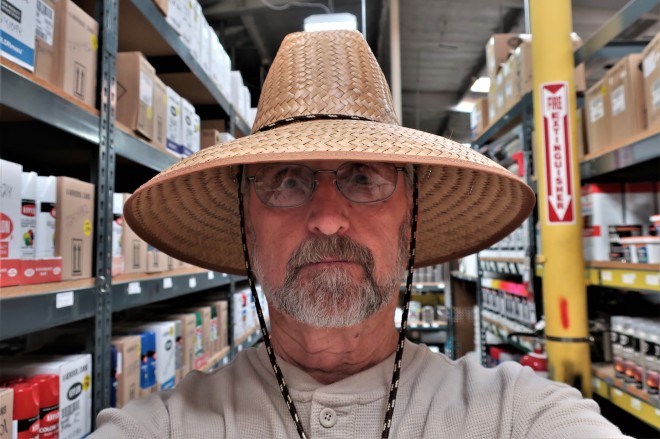 …oh, and all the hardware we needed, and even some we didn’t know we needed so purchased them as well.

But the highlight for me was the incredible variety of… 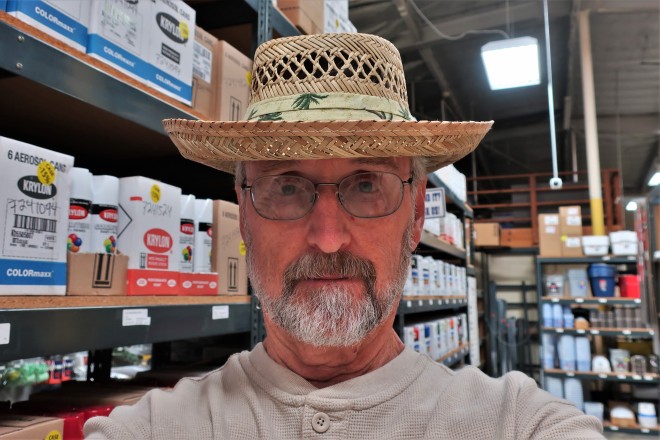 On yet another day, Kit’s sister Char, and brother-in-law Don, invited us to their beautiful condo in the north county of San Diego. 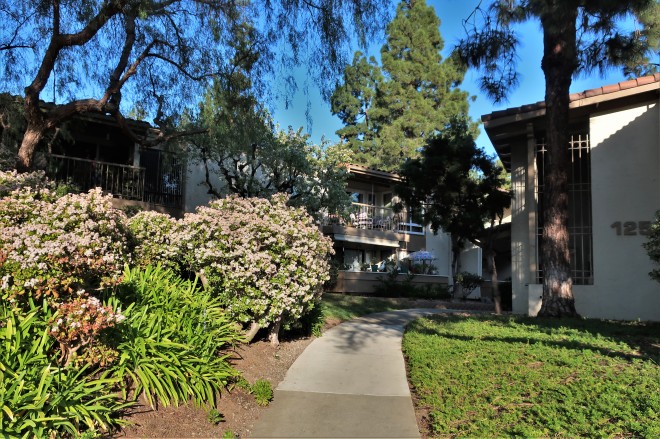 Pulling into the complex, we came upon this sight!

Apparently, the gentleman decided he would prefer an attached garage vice the remote parking spot afforded him. All was well however, as the fella wasn’t injured…well except for his pride. The accident however took Don away for a spell as he is one of the officers of the HOA.

Char fed us a delicious meal of homemade soup, and tasty biscuits, before we had to say our goodbyes for the last time this trip, but not before I stepped from behind the camera, and Jeff took this nice photo of us.

Then, the following morning, we got to spend some more time with friend Joanne when we all met up at The Omelet Shop…

…a regional favorite of Kit and I, and one we enjoyed on many a morning dining and visiting with JoAnne and Ron.

…and other then a few years where they had lost contact…

…remain friends to this day!

I’m a sucker for Girl Scout cookies and being that this is “the season” we have many boxes squirreled away in the camper. However, I’m always vulnerable to the please of cute little scouts…

Finally, on a nice sunny day, we all headed north to the coastal city of Carlsbad…the home of Legoland, which we passed on, and the Miniature Engineering Craftsmanship Museum, which we visited.

Established in 1990 by Mr. Joe Martin, the owner of the Sherline Company a manufacturer of miniature machine tools for the hobbyist, this 16,000 square foot building houses over 500 working miniature engines, from one cylinder Hit-N-Miss models… 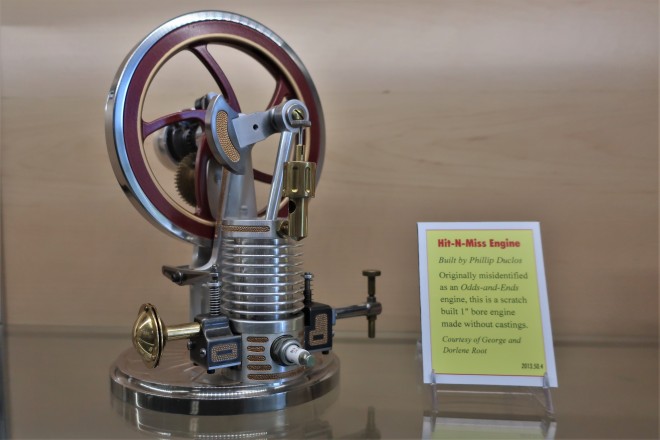 …and early automotive designed flathead engines, this one with dual carburetors…

All of these exquisitely detailed and hand-crafted model engines will fit in the palm of your hands, and the all are fully functional, running on either gasoline, alcohol, or nitromethane. Absolutely incredible!!!

Some hobbyist have chosen to continue their build and create entire automobiles, such as this beautiful Duesenberg! 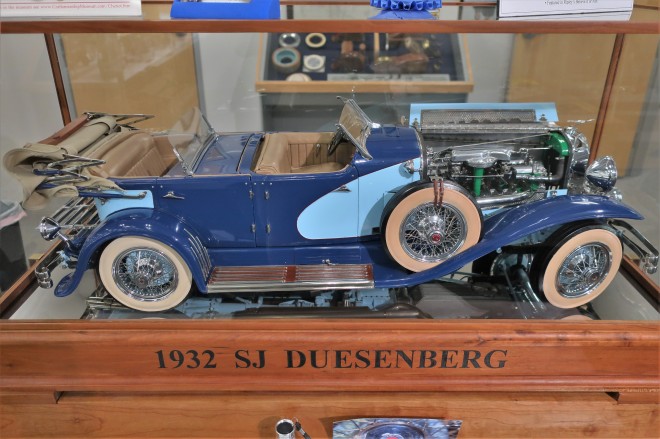 At 1/6 scale, this masterpiece took over 15,000 painstaking hours to complete and is fully functional and operational…just like the actual full-sized classic is represents!

Also, in the collection, are examples of aircraft engines, such as this 18-Cylinder Radial Engine which runs on gasoline.

And some gorgeous examples of model boats, such as this four-engine pickle-fork racing hull, and yes…fully operational! 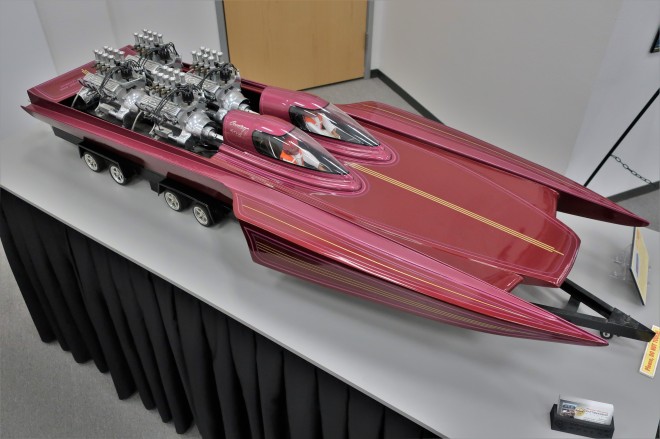 Within the museum, there is a nice machine shop staffed by a retired Master Machinist who spent time with Jeff and I explaining what they do to maintain the models on display.

And in addition, they produce gift items for those that donate to the museum, such as these Euler’s Disk’s…which Jeff and I just had to own!

These scientific gadgets are hand machined in the shop and the case shown is made using their 3D Printer!

Back at the campsite, on our final evening in San Diego, we once again gathered for a meal and some drinks. Being that we are camped in a valley, its hard to capture an acceptable sunset photo, however… 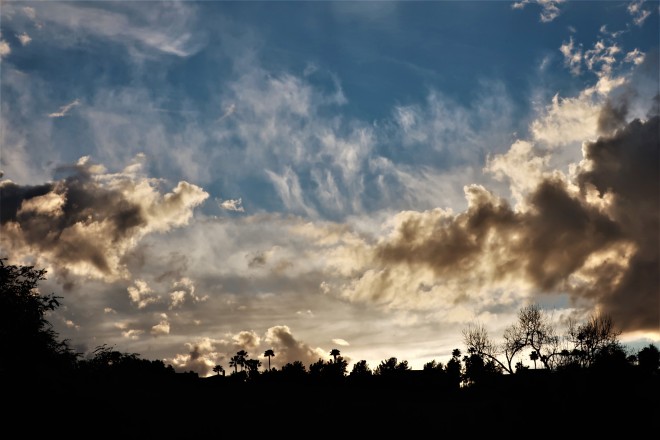 …I tried to make do with this cloud formation to the west as the sun had dropped below the hillside…goodnight from San Diego.

PS…So, what is a Euler’s Disk you ask? Well, it’s a scientific toy that does absolutely nothing useful, but is pretty cool nonetheless! Check out this YouTube video: https://youtu.be/0ivpvYMZ2ss

Kit’s Bit’s: A very busy and enjoyable time in San Diego. Didn’t think I would care for the Engineering museum, but, to my surprise, both Cathy and I loved it! Who knew there were “hidden gems” in San Diego?